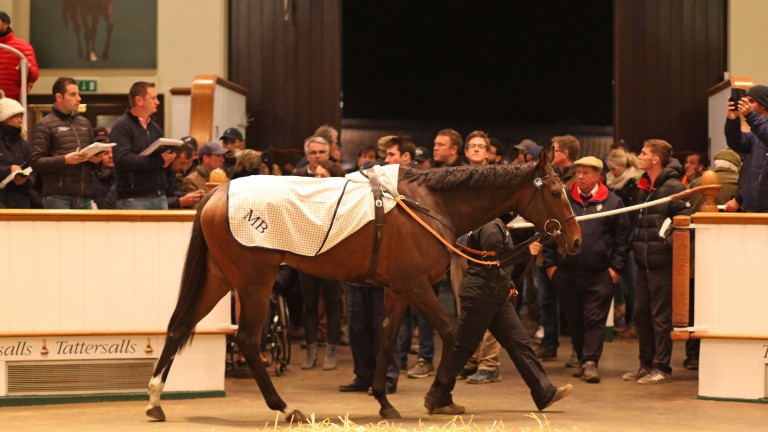 Aljazzi: the record-setting lot makes her way around the Park Paddocks ring
Laura Green
1 of 1
By James Thomas 10:47PM, OCT 31 2018

Despite the Tattersalls Autumn Horses in Training Sale catalogue containing a mammoth 1,636 lots, Aljazzi stood head and shoulders above the rest as a Duke of Cambridge Stakes-winning daughter of Shamardal.

And, as evening set in around Park Paddocks on Wednesday, she more than lived up to the hype as she went the way of Newsells Park Stud for an auction-record 1,000,000gns.

The stud's general manager Julian Dollar, taking instructions on the phone to the right of the rostrum, was involved from early in the piece, and, in front of a packed Park Paddocks auditorium he saw off a late effort from Trevor Harris of Lordship Stud to land the seven-figure prize and draw hearty round of applause from the assembled onlookers.

"She's a very good race filly and Shamardal looks like an exciting broodmare sire," said Dollar. "She has a good family further back too and we're looking to buy horses with that kind of racing performance. She has speed, she won over seven furlongs and a mile, which is all important." 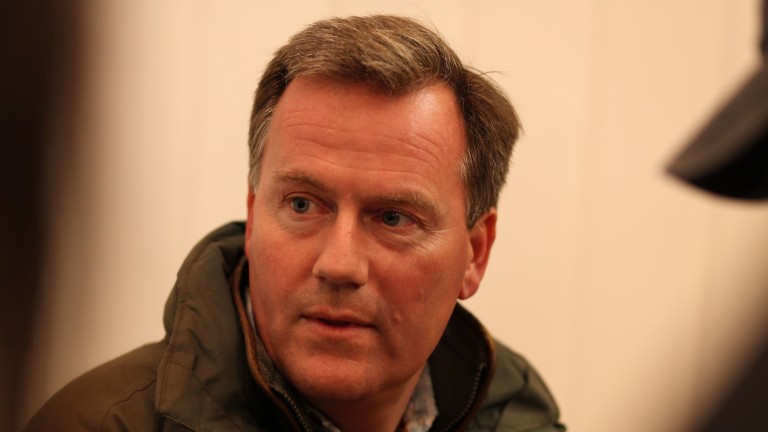 Julian Dollar: "I didn't think the boss would be brave enough to go as strong as he did"
Laura Green
The winner of five of her 16 starts for Marco Botti and owner-breeders Saleh Al Homaizi and Imad Al Sagar, Aljazzi's career highlight was undoubtedly her impressive Royal Ascot Group 2 success earlier this year. However, Dollar confirmed this would be the five-year-old's last season in training.

"She was the only filly we were remotely interested in in this sale - it's unusual that she was in this sale and not in the December Sale - but she stood out here and that's always a good plan when you come up for auction," he said. "I'm delighted as I didn't think the boss [Newsells Park owner Andreas Jacobs] would be brave enough to go as strong as he did, but then we did have a very good Book 1.

"There are lots of nice options for her, but she's done her racing and needs to go and see a nice stallion now."

Aljazzi, who also landed a brace of Listed races and the Group 3 Atalanta Stakes, is out of the Listed winner Nouriya, herself a daughter of Blue Diamond Stud's foundation mare Majestic Sakeena.

The acquisition of Aljazzi represented a reversal of roles for Newsells Park, as the stud was the leading vendor at Books 1 and 2 of the October Yearling Sale, with aggregate sales of 11,055,000gns and 2,010,000gns respectively.

Strong international participation has been a running theme of the Autumn Horses in Training Sale, and that continued during Wednesday's session, with horses now bound for a variety of destinations in all corners of the globe.

Australia's leading lady Gai Waterhouse may have been back at base putting the finishing touches to her Melbourne Cup squad, but, having delegated buying duties to Susie McKeever, the iconic trainer will now take charge of the progressive Knight Errant after a winning bid of 250,000gns.

The three-year-old son of So You Think has won four of his nine starts for William Jarvis since the trainer picked him up for just 6,000gns at Book 3 of the 2016 Tattersalls October Yearling Sale. He changed hands with a peak Racing Post Rating of 96, having landed a class four handicap at Sandown on his most recent outing.

"Gai has supported this sale for years and we almost always come away with one or two, and they've done really well - horses like The Offer [Sydney Cup winner] and Glencadam Gold [Group 1 Metropolitan handicap winner]," said McKeever. "Knight Errant is such an honest horse and his form looks very good."

McKeever was joined by Waterhouse's sales and communications manager Claudia Miller, who added: "The sale has been exceptionally strong. We've been underbidder on quite a few and we realised if we wanted this one we were going to have to go to a decent price - 250,000gns was probably more than we wanted to pay but given how the market has been we're really happy with our decision.

"He's a big, scopey horse who's already proven and we think he'll do really well in the southern hemisphere."

Out of the Woodman mare Lamanka Lass, Knight Errant is a sibling to six winners, most notably the Grade 2-winning Dark Islander.

Murphy back for more

Conor Murphy, the former Nicky Henderson employee who netted a life-changing £1 million payout from a £50 Cheltenham Festival accumulator, was back on British shores on Wednesday to restock the Churchill Downs stable he set up with his windfall.

Heading the Cork native's purchases was four-time winner Argentello, who fetched a winning bid of 210,000gns when offered by John Gosden's Clarehaven Stables.

"You're not going to improve one off the best trainer in the world, but if he can hold his form you'd like to think he can win a few nice races," said Murphy. "He's an impressive individual and a very good-moving horse who seems a solid type, so hopefully we'll have a bit of luck with him."

The son of Intello, a 140,000gns Book 2 yearling buy by Blandford Bloodstock, moves yards with a peak RPR of 109 having won a quartet of races over a mile. 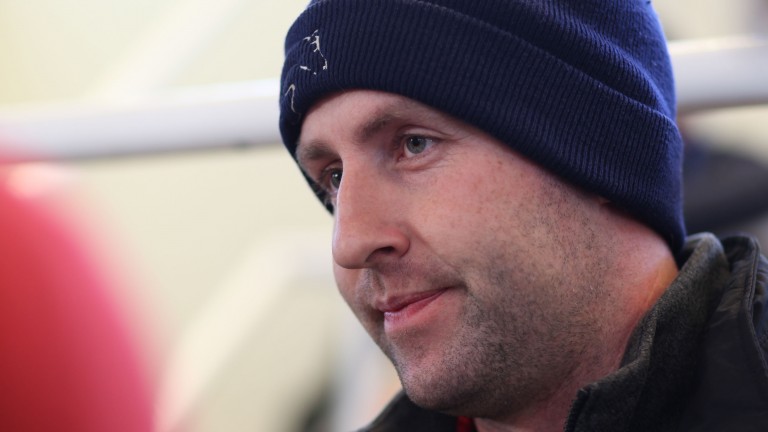 Conor Murphy: "You're not going to improve one off the best trainer in the world"
Laura Green
"We've got a lot of options with him," continued Murphy. "Hopefully he'll get a mile and a quarter on our sharper tracks and he seems versatile ground-wise. We'll give him a break now and let him acclimatise and bring him back in the spring."

A short while later Murphy rejoined the fray when giving 150,000gns for smart handicapper Sabador, a dual winner by Kendargent who was last seen finishing second to Argentello.

Murphy, who landed the seven-figure payout after Sprinter Sacre, Simonsig, Bobs Worth, Finian's Rainbow and Riverside Theatre all triumphed at Cheltenham in 2012, has enjoyed success with his previous Autumn Horses in Training purchases.

Two years ago he secured Great Wide Open for 45,000gns, and the son of Starspangledbanner has now netted $395,643 in earnings, having last been seen finishing runner-up in the Grade 1 Shadwell Turf Mile Stakes.

A grand update for Elliott

Progressive four-year-old stayer The Grand Visir did his prospects in the Park Paddocks ring no harm when, having undergone wind surgery, he ran away with a 0-95 handicap at Doncaster on Friday by a widening three lengths.

That effort came on his first start for John Butler, and the son of Frankel looks set to be on the move again having brought a winning bid of 170,000gns from agent Alex Elliott early on in the session.

"The wind operation might've put a lot of people off, but for a horse to win like he did at the weekend it's obviously brought him forward as that was a very good performance," said Elliott. "He went up seven pounds for that but if he can continue to progress he could become a high-class stayer."

This was not the first time The Grand Visir has fetched a six-figure sum, having been bought for owners Saleh Al Homaizi and Imad Al Sagar by Tony Nerses for €750,000 at the 2015 Arqana August Sale. The colt has showed smart form during his career, with his four wins including successes at Newmarket and Haydock for William Haggas. 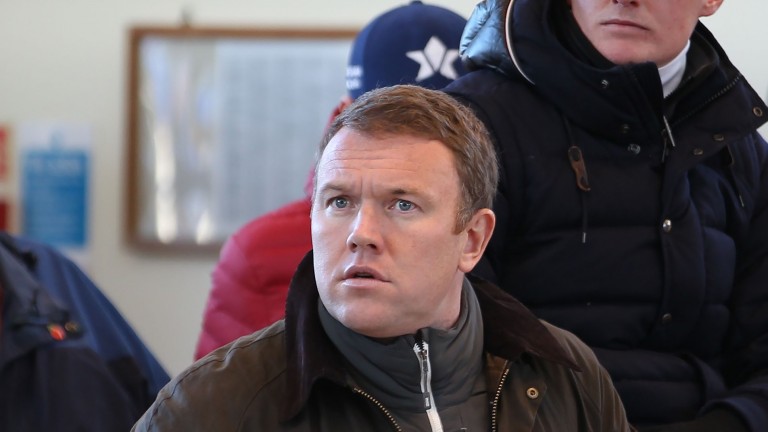 Elliot was back in action later on as he dipped into the Juddmonte draft to acquire Breath Caught, a Bated Breath half-brother to four-time Group 1 winner Twice Over, for 200,000gns.

"He's been bought for Ian Williams," revealed Elliott. "As we all know, Ian's had some great success from this sale but he can't be here as he's on his way to Australia to see Magic Circle - who he bought here last year - run in the Melbourne Cup.

"This horse was his pick of the sale and when a guy like Ian Williams picks one out you have to go with him. He'll be gelded now and brought back next season."

Zonderland was among the familiar names to find a new home on Wednesday, with the high-class son of Dutch Art set to continue his racing career for Luke Comer, having been knocked down to the trainer's representative Jim Gorman for 140,000gns.

"He'll go to Ireland and hopefully run again," said Gorman, whose purchase finished runner-up to Limato in the Group 2 Challenge Stakes on his latest start.

"He's a good horse and his run the other day was a good one."

The record-busting top lot helped ensure that Wednesday's session returned a healthy set of figures, led by a clearance rate of 91 per cent, with 283 of the 310 offered lots finding a buyer.

The Autumn Horses in Training Sale concludes on Thursday, with a session starting at 9.30am.

Overseas buyers to the fore on opening day

FIRST PUBLISHED 10:47PM, OCT 31 2018
You're not going to improve one off the best trainer in the world, but if he can hold his form you'd like to think he can win a few nice races