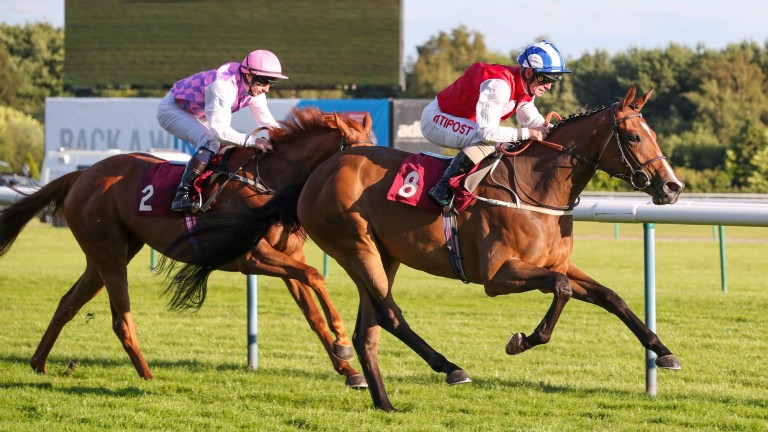 Ribblesdale Stakes entry West End Girl created her own piece of history on Monday as she topped the inaugural Tattersalls online auction when selling to Badgers Bloodstock for £420,000.

The daughter of Golden Horn – who last July became her sire's first ever winner – is due to take up her Royal Ascot engagement and will now carry the colours of Cayton Park Stud.

The Mark Johnston-trained filly is around 20-1 for Tuesday's Group 2 prize after running a close third to Miss Yoda in the Lingfield Oaks Trial this month, but Tom Pritchard-Gordon of Badgers Bloodstock said the filly's appeal stretched far beyond her chances at Ascot.

"She's a lovely filly and she runs in the Ribblesdale Stakes," he said. "Mark Johnston's horses are in great form so she's got a squeak, but in all honesty she's already done everything she needs to do to make a great addition to anyone's broodmare band.

"As a Group 3-winning two-year-old from a great Car Colston Hall family she's a lovely filly to have. Anything else she does on the racecourse now is going to be a bonus." 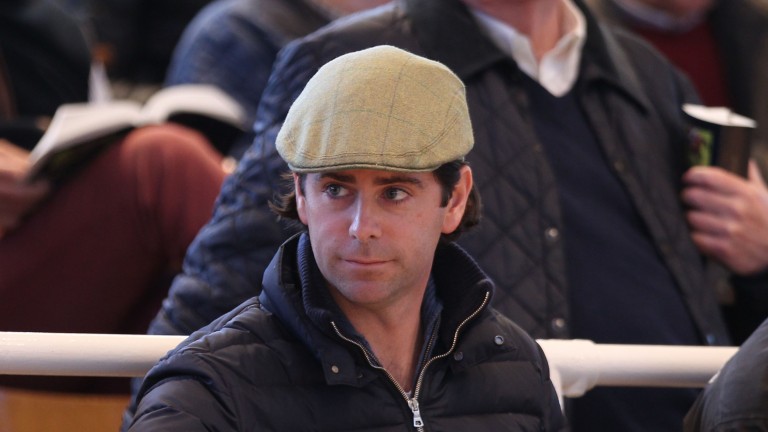 Tom Pritchard-Gordon of Badgers Bloodstock
Laura Green
The three-year-old filly holds obvious appeal as a breeding prospect, not only having won the Sweet Solera Stakes at two but also possessing a strong pedigree.

Bred by Car Colston Hall Stud, West End Girl is out of Free Rein, a winning daughter of Dansili from the Wiener Wald clan that has been a source of much success for breeders Nicholas and Jane Forman Hardy.

The filly, who previously carried the colours of Alan Spence, was bought by Johnston for 95,000gns from Book 2 of the Tattersalls October Yearling Sale in 2018.

Pritchard-Gordon, who works alongside his father Grant, is no stranger to buying thoroughbreds online.

The Badgers Bloodstock team were active at the Inglis Easter Yearling Sale and the company's Chairman's Sale, both of which were staged digitally this year because of restrictions brought in to stop the spread of Covid-19.

"We bought at the two Inglis online sales earlier in the year and all the formats are very similar," said Pritchard-Gordon. "There was a slight hiccup on the technical side of things later on in the Tatts sale, but everyone overcame that and we were delighted to come out on top and get the filly."

Bidding had been scheduled to close shortly after noon on Monday, but the time limit was extended by around 20 minutes after some initial teething problems.

Giving a buyer's perspective on proceedings, Pritchard-Gordon said: "I think they had a slight issue with their servers so they extended the sale by another 20 minutes. We were trying to bid £420,000 before it went offline but were able to get the bid in afterwards.

"We were delighted to get her and fingers crossed she can run a nice race tomorrow, though that race isn't the be-all and end-all because she's a lovely filly to go to stud with in the longer-term."

Cool Silk get the message

The other lot to change hands was Coventry Stakes entrant Igotatext, who was sold to Peter Swann of The Cool Silk Partnership for £165,000 when offered by Archie Watson's Saxon Gate yard.

The colt made a successful debut over 6f at Lingfield earlier in the month, and supplied his sire Ajaya with his first winner in the process.

Swann, who intends to let Igotatext take up his Coventry Stakes entry, said that he was looking to replenish the Cool Silk ranks after a delayed breeze-up season had left the owners with a depleted team for this year's royal meeting.

"We buy a lot of our horses through the breeze-up sales and this year has been a bit of a dry patch for us after having five Royal Ascot runners last year," he said. "When the opportunity came to have a look at the horses Tattersalls offered online, we looked at a couple and I thought he stood out as a potential improver.

"He's a big, strong horse and probably did better than anybody thinks at Lingfield as he was drawn out wide but actually did it quite comfortably in the end. He ticked a lot of our boxes and I'm delighted to have nabbed him."

On the colt's Royal Ascot prospects, Swann said: "We do take a gamble with our horses so why not have a go? Archie's happy to take him there, he'll stay with Archie after that run, so we're looking forward to Saturday. Now it's down to Archie and the horse." 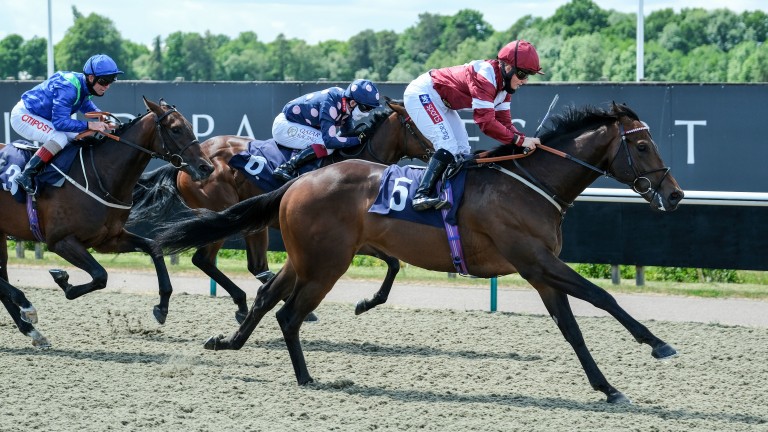 Igotatext: sold for £165,000 on Monday
Getty Images
Swann added that this was his first experience of buying a horse online, but said he welcomed the addition to the auction calendar, particularly given that other sales had needed to be rearranged because of the ongoing coronavirus pandemic.

"Everyone's having to adapt to the situation at the minute and as owners who normally buy at the breeze-ups it's been very difficult," said Swann. "It's nice to be able to get in there and buy a horse we can run at Royal Ascot - even though we can't be there. It was nice to be able to go online and utilise the Tatts website to get a racehorse for Ascot. The process of buying was very straightforward.

"It's been an interesting experience as this is the first horse we've bought online, but we made sure we made all the enquiries we would do normally and had a chat with Archie beforehand.

"There's nothing like seeing a horse in the flesh and we love going to the sales but if we can't manage to get everyone to the sales it's nice to have this as a backup. I thought Tattersalls did a great job and it can't have been easy for them recently. It was nice to give it a go and hopefully it'll bring us a bit of luck."

Igotatext, whose dam is out of a winning half-sister to dual Group 1 winner Kingsgate Native, was making his third appearance on the public market, having failed to sell as a foal at €13,500 before being bought by Blandford Bloodstock for €10,000 at the Tattersalls Ireland September Yearling Sale. 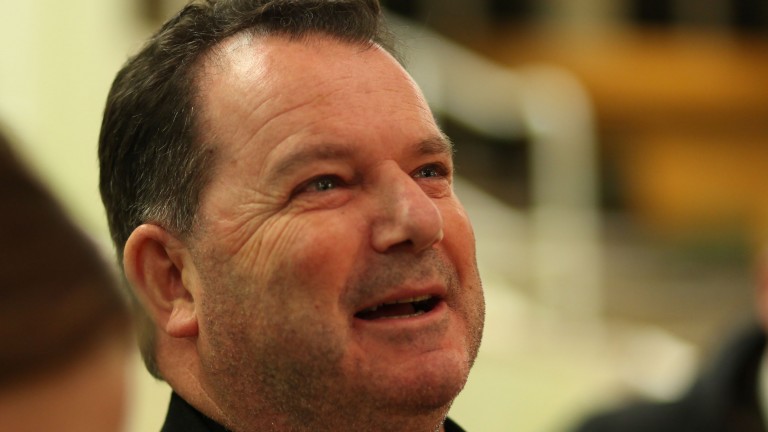 Peter Swann: "He ticked a lot of our boxes and I'm delighted to have nabbed him"
Laura Green
Igotatext will now form 50 per cent of The Cool Silk Partnership's Royal Ascot team, with Sands Of Mali being primed for a reappearance run in the Diamond Jubilee Stakes on Saturday.

The son of Panis was last seen at the Tattersalls December Sale, where Cool Silk went to 600,000gns to buy out Phoenix Thoroughbreds' share in the Group 1-winning sprinter.

"He's back to his best, we're delighted with what he's been doing at home with Richard [Fahey] and after a strange year last year we're hoping he'll get back and dominate the older sprinters category," said Swann.

The three other lots catalogued for the Tattersalls online sale failed to find a buyer, with Star Of Emaraaty and Tantastic not sold at £115,000 and £82,000 respectively, and Muker, a debut winner at Newcastle, bought back by his vendor at £150,000.

At the close of trade of the first horses-in-training sale to be held online in Britain or Ireland, Matt Prior, head of Tattersalls Ascot sales, said: "A big team effort has gone into getting the inaugural Tattersalls Ascot Online Sale off the ground and we're very pleased with the results.

"There were a few technical glitches along the way which were quickly resolved and we will learn from today's sale, but overall it was a genuinely encouraging start for Tattersalls Online.

"We had wholehearted, enthusiastic support from the vendors as well as bidders from throughout the world, and we would like to extend our thanks and gratitude to all who supported and participated in this new venture.

"In particular we wish all the connections the very best of luck with their purchases this week if taking up their engagements at Royal Ascot."

FIRST PUBLISHED 3:19PM, JUN 15 2020
She's already done everything she needs to do to make a great addition to anyone's broodmare band

'She ticked all the boxes' - £56,000 No Risk At All filly foal tops January Sale 'We've had calls from breeders finding it difficult' - ITBA start webinar series Shade Oak Stud's Logician making heads turn at Goffs UK Winter Million bumper star Our Jester and his fittingly unconventional pedigree On the roads of Normandy: Five nuggets from my weekend on the Route des Etalons The Great British Stallion Showcase returns for 2022