Stallion has been reintroduced to food under assessment in New Zealand 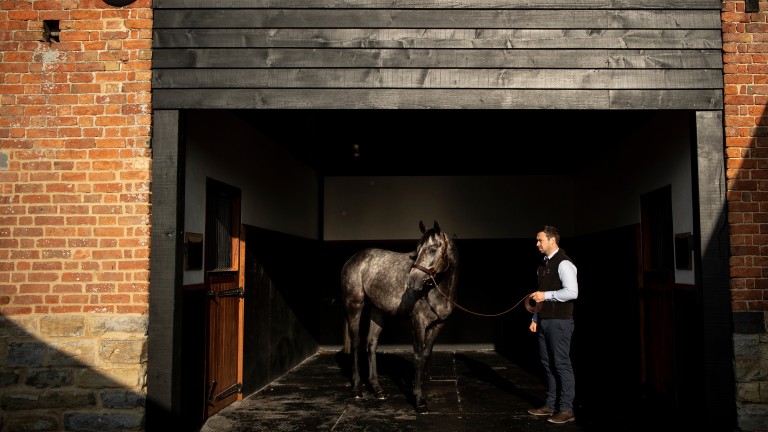 Roaring Lion has finished his first season at Tweenhills in Gloucestershire
Edward Whitaker
1 of 1
By Tom Peacock UPDATED 7:28AM, AUG 1 2019

David Redvers has been able to offer some more encouraging news about Roaring Lion, who continues to recover from an emergency colic operation.

The owner and manager of Tweenhills, Roaring Lion’s British home, has been in New Zealand to monitor the progress of the stallion after learning of the alarming development from Cambridge Stud over the weekend.

He had explained on Monday that the four-year-old, a multiple Group 1-winning son of Kitten’s Joy, was thought to have chances of "60-40" as although the outward signs and tests were clear, he was not eating and it was uncertain whether his small intestine was working correctly.

Although warning that the dangers were by no means over, Redvers and veterinary experts had better news on Tuesday.

"Roaring Lion is looking more comfortable this morning," he said. "He is pawing for his grub and looking slightly irritable, which is a great sign having had a good night.

"They’re going to slowly reintroduce some food to him today and hopefully he will continue to progress. So having taken two steps forward and one back, he has now taken another step forward again and we’re cautiously optimistic, but he’s still a long way from being out of the woods."

Roaring Lion is recuperating at Cambridge Equine Hospital and Tweenhills had an upbeat bulletin from surgeon Dr Alanna Zantingh.

"Roaring is doing much better today," she said. "He’s much brighter than he was yesterday. He has pretty good motility on ultrasound and his stomach has remained small, so we’ve given him handfuls of grass every couple of hours and he’s eating it really, really well, wishing for more.

"His stomach has been handling it well and all his vitals have been within normal limits all day. He’s starting to get a little annoyed with us which I think is a very good sign!"

Cambridge Stud's veterinarian Dr Rob Hitchcock added: "Roaring Lion has had a really good night. All his vitals are within the normal parameters. He's got some good gut signs and he's been comfortable through the night.

"We'll continue to give him some food in small amounts and monitor his progress. His intestines have worked and he had a really good soft manure pass in the night which is very positive. It's still fingers crossed but we're happy with him this morning."

Roaring Lion, who had completed his first book at Tweenhills, had been due to cover for the southern hemisphere season at Brendan and Jo Lindsay's Cambridge Stud before the major setback.

FIRST PUBLISHED 11:07AM, JUL 30 2019
All his vitals are within the normal parameters. He's got some good gut signs and he's been comfortable through the night.