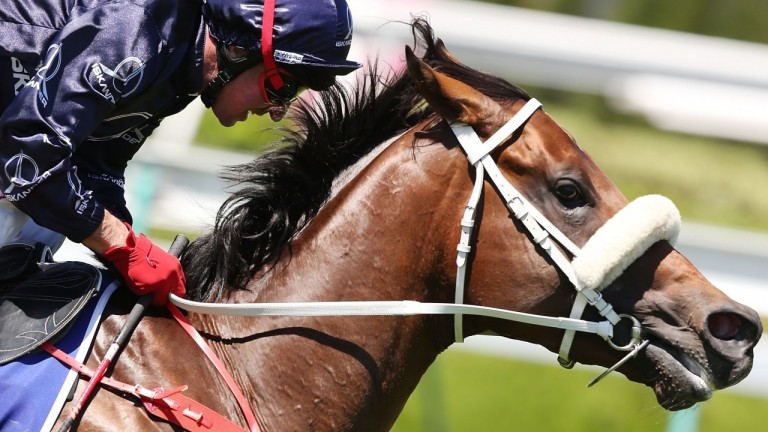 Zoustar: the upwardly mobile son of Northern Meteor could be set for a reverse shuttle trip
Michael Dodgy/Getty Images
1 of 1
By James Thomas UPDATED 6:40PM, FEB 23 2018

Finding a horse good enough to deserve a place at stud is no mean feat, and landing on one capable of becoming a success in his second career is an even more rare achievement. So Sheikh Fahad Al Thani and his team must be pinching themselves at present, as they have managed to unearth a pair of promising young sires on opposite sides of the world.

Tweenhills Stud resident Havana Gold has made a fast start to his second career, with his debut crop featuring 24 winners, including the likes of Group 3 scorers Havana Grey and Treasuring and the unexposed debut winners Raid, Tabdeed and Worship.

And Sheikh Fahad is also involved in Zoustar, a son of Northern Meteor who splits his covering seasons between Widden Stud in New South Wales and Woodside Park in Victoria. Zoustar's early runners have already set tongues wagging in his native land, and should he continue his upward trajectory he could well be destined for a reverse shuttle trip to Tweenhills to stand alongside Havana Gold.

"We had a fairly tortuous time deciding whether we brought him up this year but, quite sensibly I think, we decided not to and just to let his two-year-olds get up and running," said the sheikh's racing manager David Redvers.

"He's made an absolutely sensational start out there. He's potentially got two top-class chances in the Golden Slipper [Sunlight, Zousain] so there's a massive buzz about him in Australia. Northern Meteor has been an absolutely tragic loss for Widden but thank god they've now got a serious son to carry his legacy forward."

Zoustar: sire of leading Golden Slipper hopes Sunlight and Zousain
As if launching any stallion weren't difficult enough, reverse shuttlers often have to overcome something of a familiarity bias among breeders. But Redvers is confident that Zoustar brings a far more appealing profile than many antipodean sires arriving on these shores.

"All the people that saw him when he came up for Ascot, when unfortunately he couldn't run because of a small knock, were giving him rave reviews because he's such a gorgeous-looking horse," he said. "The way he's stamped his stock and the way they've been selling in Australia, he can only really capture the imagination if he comes.

"We haven't had many real top-class young sires shuttle up here early in their career, so it's an exciting position to be in and at the moment we'd be leaning heavily towards bringing him up. Obviously we'd want to see that he's hale and hearty and that his stock continue to progress, but at the moment it would very much be our ambition to bring him here."

With Havana Gold due to be rejoined by exciting freshman Charm Spirit in 2019, and with Zoustar potentially waiting in the wings, the outlook for the Qatar Racing stallion roster has never been brighter.

"We're still a relatively young operation so it's very rewarding to hit upon Havana Gold and Zoustar so early on," said Redvers. "That changes the whole dynamic as, rather than taking a gamble when sending a mare to a young stallion you know you're putting in some value added. We're in a very exciting period at the moment."

FIRST PUBLISHED 6:29PM, FEB 23 2018
Northern Meteor has been an absolutely tragic loss for Widden but thank god they've now got a serious son to carry his legacy forward