Return to source for dam of King's Stand hero Profitable 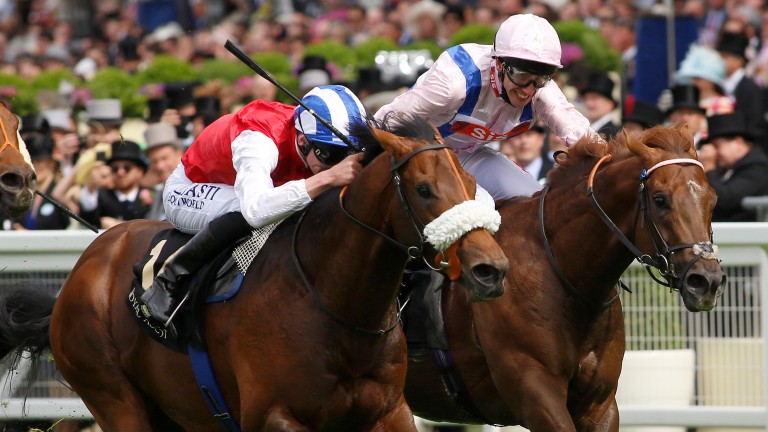 Profitable (nearside): sticks his neck out in front in the King's Stand Stakes at Royal Ascot
Julian Herbert
1 of 1
By Ollie O'Donoghue 7:32PM, JAN 27 2017

Dani Ridge, the dam of 2016 King’s Stand Stakes winner Profitable, will return to Invincible Spirit at the Irish National Stud this year.

The daughter of Indian Ridge raced from three to six and won three races for trainer Eric Alston, and has produced ten foals, including a number of performers who have lit up the racecourse.

Trained by Clive Cox, Profitable opened his account at the second attempt in a 5f Sandown maiden and was unlucky not to add to the tally as a juvenile when a close second in three nurseries. At three he won the Listed Westow Stakes at York and was runner-up in the Listed Scurry Stakes at Sandown.

Profitable continued over the minimum trip at four, winning three consecutive Group races, including the Temple Stakes at Haydock by a neck from Mecca’s Angel and the King’s Stand Stakes by the same distance from Cotai Glory. Godolphin bought him after his four-year-old campaign.

John Walsh, bloodstock agent, said: “The plan is to go back to Invincible Spirit with Dani Ridge.

“I helped shuttle Invincible Spirit to Australia and we’ve long been supporters of the horse. The mare has produced some very smart horses by him apart from Profitable.”

Among Dani Ridge’s other progeny is the Group 3 Summer Stakes scorer Ridge Ranger, by Bushranger, who will join her dam in going to Invincible Spirit for her first covering.

Danidh Dubai, an 11-year-old mare by Noverre, was third in the Group 3 Albany Stakes at Royal Ascot. She is the dam of Gamgoom, a Listed winner in Italy and Listed-placed in Britain. Gamgoom was also a winner of a conditions race at Deauville this month.

Full Mandate, a seven-year-old mare by Acclamation, has also been bred from. She was second in the Group 3 Princess Margaret Stakes at Ascot and the Goffs Million Sprint at the Curragh.

Con Harrington, who owns Dani Ridge, said: “With the mare now 19, and Invincible Spirit 20, we might not have another opportunity to send her to him.

“She’s been very good and has had a foal every year. She has a nice three-year-old by Mastercraftsman with Clive Cox, Crafty Madam, who was fourth in her maiden at Leicester in October.”

Dani Ridge also has a two-year-old by Acclamation and is in foal to Kodiac; she is due to foal in mid-February.

Another of Harrington’s mares is Indian Maiden, a prolific stakes winner by Indian Ridge who is in foal to Free Eagle and will go to Territories, a son of Invincible Spirit, this year.

She has bred Love Spirit, by Elusive City, who won the Listed Prix Servanne at Maisons-Laffitte last season.

Walsh, explaining the decision to send the mare to Territories, said: “He’s a very good-looking horse and represents very good value. We like him as an individual and he’s a superbly bred stallion out of a Machiavellian mare, with Shamardal on his bottom line.”

Both dams have been consistent producers, with Dani Ridge producing eight winners and Indian Maiden responsible for five.