James Thomas reports from day one of the breeding stock auction 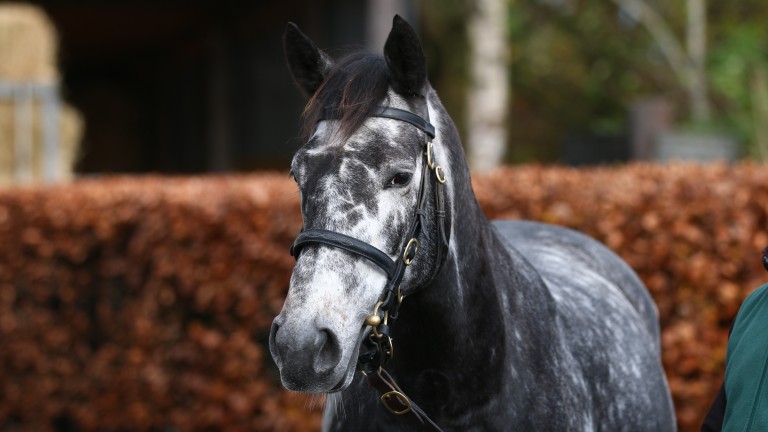 Attention turned to broodmare prospects at the Goffs November Breeding Stock Sale on Thursday, where lively trade was headed by Snowflakes at €525,000, with BBA Ireland's Eamonn Reilly landing the winning bid.

The four-year-old's appeal centred around her pedigree, as she is a winning Galileo sister to Winter, who did the 1,000 Guineas double and also won the Coronation Stakes and Nassau Stakes during a stellar campaign for Aidan O'Brien and the Coolmore partners in 2017.

"She's been bought for an American client who keeps his mares in Ireland," said Reilly from his position to the left of Henry Beeby's rostrum. "She's by Galileo so she speaks for herself. No decision has been made about her 2020 covering."

Snowflakes, who was offered by The Castlebridge Consignment carrying to Coolmore's US Navy Flag, is the third foal out of Laddies Poker Two, who famously landed an almighty gamble when winning the 2010 Wokingham Handicap at Royal Ascot.

Barronstown go back to the well

Irish Thoroughbred Breeders' Association hall of fame inductees David and Diane Nagle have enjoyed some notable successes with their past purchases from the Goffs November Sale, with Chelsea Rose a notable recent example.

The daughter of Desert King, who topped the 2012 sale at €450,000, went on to produce dual Group 1 winner Kew Gardens when mated with Galileo.

The couple added to their Barronstown Stud broodmare band when going to €330,000 through Reiley McDonald's Eaton Bloodstock for Qatar Princess, offered in foal to Free Eagle by Linacre House Stud. 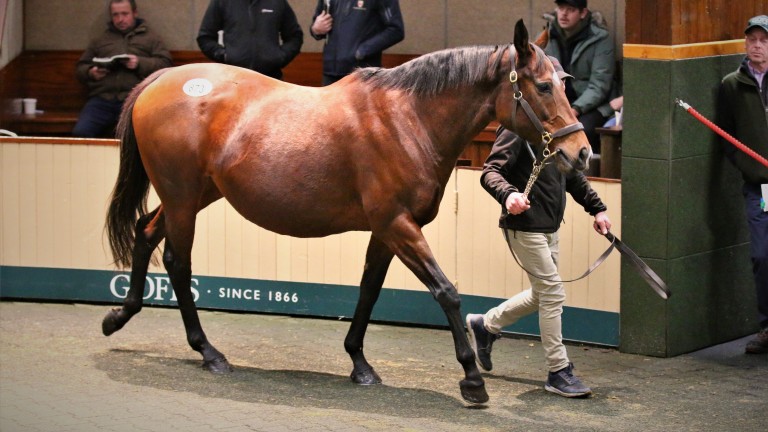 Qatar Princess: bought by Barronstown Stud's Diane Nagle at €330,0000
Peter Mooney
The eight-year-old daughter of Marju has got her broodmare career off to a fine start with her first foal, the Hot Streak filly Flaming Princess, winning the Listed Prix Cavalassur for Richard Fahey and the Cool Silk Partnership.

This family has already produced some notable performers for the Nagles, as Qatar Princess is a half-sister to the Barronstown-bred Royal Dornoch, a son of Gleneagles who landed the Group 2 Royal Lodge Stakes this year.

David Nagle said: "This was Diane's pick. We'll send the mare to one of the Coolmore stallions, though we haven't decided which one yet."

The Kentucky-based McDonald also went to €210,000 for the Galileo mare Height Of Elegance, who formed part of a dispersal of mares that belonged to Peter Magnier, who died in January aged 69.

The Brittas House Stud man is perhaps best remembered for the success he had with the Irish River mare Brigid, from whom he bred Fillies' Mile winner Listen and Moyglare Stud Stakes winner Sequoyah, the latter the dam of dual Classic hero Henrythenavigator.

Brigid also bred two Tattersalls October Book 1 yearling sale-toppers in Liffey Dancer (who fetched 2,500,000gns in 2007) and Nazym (1,700,000gns in 2011), as well as Height Of Elegance, who now looks set to continue her breeder's legacy on the other side of the Atlantic. 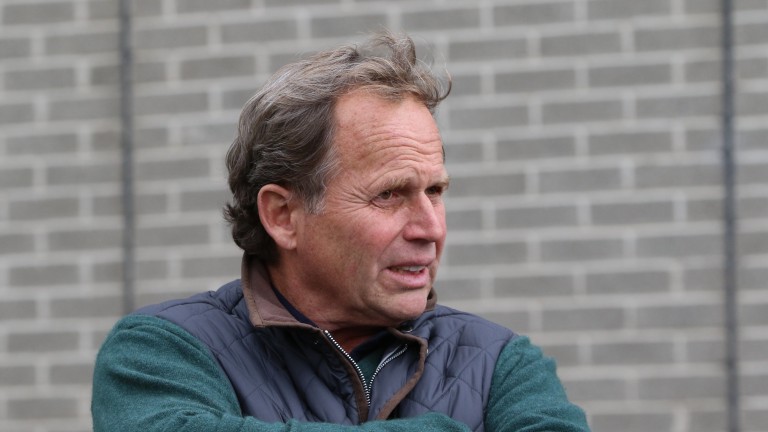 Reiley McDonald: "I'm surprised at how inexpensive some of these Galileo mares have been"
Peter Mooney
"The plan is to try to bring more Galileo mares back to America, which we've been doing in small doses for the last few years," said McDonald. "I think sales like this are a great opportunity to come and buy Galileo mares - there’s no better broodmare sire in the world, so why not?

"Actually, I'm surprised at how inexpensive some of these Galileo mares have been."

Height Of Elegance, who was offered in foal to Caravaggio, is already off the mark at paddocks thanks to the Zoffany filly Zofelle, who recently landed an allowance race at Keeneland on her US debut for trainer Brendan Walsh and owner Rebecca Hillen.

"Zofelle ran a nice race last week and I talked to Brendan this morning and he said he thinks bigger and better things are ahead of her," added McDonald. "Hopefully she's on the improve."

Few - if any - mares in the November Sale catalogue could boast the kind of pedigree power Etoile Filante did, and the half-sister to the four-time Group 1 winner Alpha Centauri was duly knocked down to John McCormack at €300,000.

Moreover, the daughter of So You Think, offered by Kiltinan Castle Stud, was sold in foal to Mastercraftsman, meaning the resulting foal will be a three-parts sibling to Alpha Centauri.

"She's been bought for an existing client and will stay here in Ireland," reported McCormack. "I hope to send her to Ballylinch if they'll have her. We don't have a plan in terms of a covering for next year, though Lope De Vega will certainly be an option." 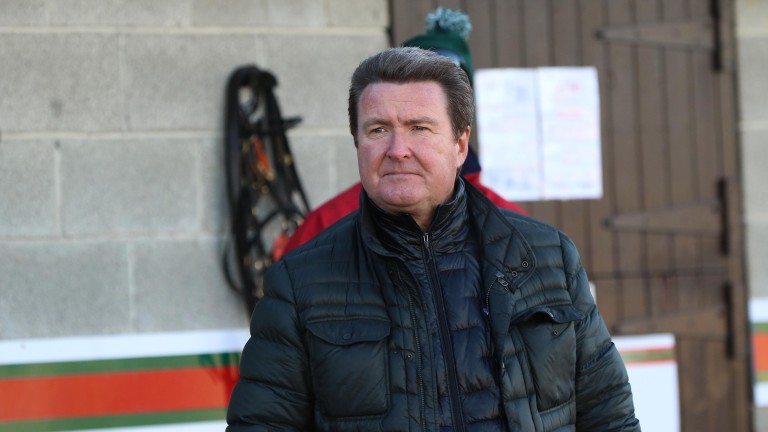 John McCormack: "We're just buying into someone else's great engineering"
Peter Mooney
As well as her champion sibling, Etoile Filante is also a half-sister to the Listed-winning Tenth Star and the exciting juvenile Alpine Star, winner of the Group 2 Debutante Stakes. In turn, they are out of Alpha Lupi, a daughter of champion East Of The Moon, herself a daughter of the mighty Miesque.

McCormack added: "She's a nice mare and the family is one of the best there is. Alpine Star looks very exciting and you'd be hopeful she can add to her laurels next year. We're just buying into someone else's great engineering and the hope is that she'll carry the bloodline forward. She's still young and has a good cover inside her."

There was a notable French presence on the sales grounds, and among the visitors' purchases was Danseuse D'Etoile, who went the way of Laurent Benoit of Broadhurst Agency for €230,000 when offered by Mount Coote Stud.

The unraced four-year-old, offered in foal to Fast Company, is a three-parts sister to this year's smart juvenile Walk In Marrakesh, who landed the Listed Star Stakes for Mark Johnston and Merriebelle Irish Farm.

"I've been wanting to get into that family, it's top-class and very active," said Benoit. "She's a Pivotal out of a young dam and there are plenty of fillies breeding on the page. She'll go to France."

By leading broodmare sire Pivotal, the filly is a granddaughter of Zelda, dam of champion sprinter Zipping and ancestress of Hydrangea, Hermosa and Glorious Sight.

Blue Diamond on a spree

Few buyers were busier at Goffs on Thursday than Blue Diamond Stud owner Imad Al Sagar who, with long-time racing and bloodstock adviser Tony Nerses, signed for six lots at a total outlay of €645,000.

Among that haul was Gilt Edge Girl, daughter of the late Monsieur Bond, who landed the 2010 Prix de l'Abbaye. Consigned by Kiltinan Castle Stud, the 13-year-old was offered in foal to Saxon Warrior.

Al Sagar revealed that Gilt Edge Girl - the dam of one winner, Listed scorer Time's Arrow - had been acquired in partnership with the Irish National Stud, who stand the owner's triple Group 1 winner Decorated Knight.

He said: "It's a joint effort between Blue Diamond and the Irish National and she goes to Decorated Knight. Her Frankel yearling is well regarded and she still has lots of mileage in her."

Gilt Edge Girl was making her second appearance at the November Breeding Stock Sale, having gone the way of the Niarchos family's Flaxman Stables for €550,000 during the Paulyn Dispersal in 2013.

Al Sagar also went to €200,000 for Rivercat, a daughter of Kitten's Joy and the Group 3 winner Anjaz carrying to Raven's Pass. The Godolphin-consigned four-year-old is a winning half-sister to Dubai Future, a son of Dubawi who has won two of three starts for Charlie Appleby.

In turn, Anjaz is by Street Cry and out of the Fillies' Mile heroine Playful Act, a three-parts sister to Nathaniel who set a then-world record of $10,500,000 for a broodmare when bought by John Ferguson at the 2007 Keeneland November Sale.

"It's a tremendous family and it's still producing," said Al Sagar. "I like the Street Cry cross in there too. She's a young mare full of potential, very correct and a good size."

The Derby-winning owner said that Rivercat would join Gilt Edge Girl in visiting Decorated Knight, with Penlight, a Shamardal half-sister to Monterosso bought for €90,000, and Morningtide, a Shamardal granddaughter of blue hen Hellenic bought for €60,000, also likely to visit the son of Galileo too.

Having enjoyed a fruitful few days during the foal sessions, most notably with the sale of an Invincible Spirit colt for €330,000, the Irish National Stud reinvested in a new addition to its broodmare band when going to €110,000 for Adhwaa from the Derrinstown Stud draft.

The Listed-placed daughter of Oasis Dream, herself out of the Cheshire Oaks scorer Hammiya, was offered in foal to Darley's sire sensation Night Of Thunder.

"She's a stakes-placed filly from a great home," said the Irish National Stud chief executive Cathal Beale. "Charlie Hills has the Exceed And Excel and the covering to Night Of Thunder is very attractive, he's got a really good chance of being a success.

"She's out of a stakes winner too and from a good family so she made a lot of sense for us. She could be one to go to our new horse Phoenix Of Spain. He'll fit across her very nicely with the Green Desert over Darshaan cross in her pedigree.

"We've had great interest in Phoenix Of Spain already. The big thing for us is that when people come to see him, no one is leaving without buying a nomination - he's such an outstanding physical. He's up at the stud now and settled in well so people can come and look at him if they give us a call."

The clearance rate closed at 86 per cent, with 185 of 216 offered lots finding a buyer.

Ghaiyyath's brother steals the show as Godolphin go to €1.2 million

FIRST PUBLISHED 9:06PM, NOV 21 2019
Actually, I'm surprised at how inexpensive some of these Galileo mares have been