Records expected to fall as Japanese bluebloods go on offer

Michele MacDonald reports on the outstanding lots in the catalogue 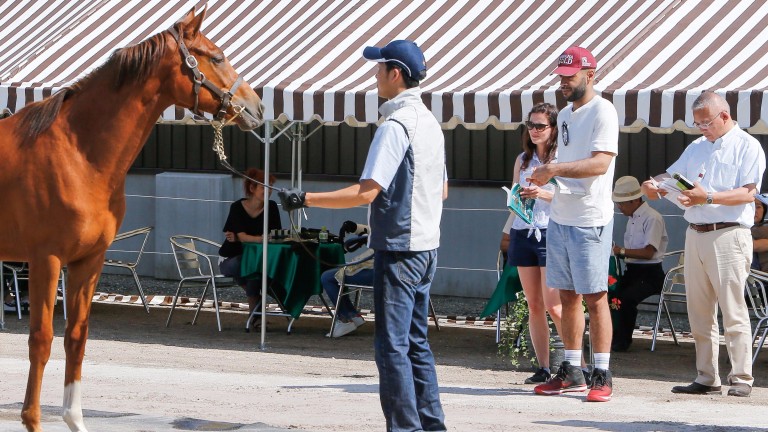 With the best of Japanese bloodstock set to parade through the Northern Horse Park sale ring on Monday and Tuesday, organisers of the Japan Racing Horse Association Select Sale are confidently predicting that record spending will be recorded for the fifth consecutive year.

“We are expecting better horses this year,” said JRHA chairman Taro Kono, who also serves as an elected member of Japan’s House of Representatives, during a welcoming speech at a pre-sale party for buyers on Sunday.

“Last year, the equivalent of about $140 million (over ¥14.94 billion) was spent, which was a record, but we are expecting a new record this year,” said Kono, while noting that 42 Grade/Group 1 winners of 75 elite races worldwide have emerged from the JRHA sale in its relatively brief history.

The two-session sale, with the first day featuring yearlings and the second foals, will be marking its 20th anniversary, and JRHA vice chairman and Shadai Farm master Teruya Yoshida acknowledged how far Japanese breeding has evolved in two decades.

“At the time we started, we thought we were dreaming to have foreign buyers at this sale. Now we have many foreign people here,” Yoshida said in brief remarks at the party.

“During the 20 years, we have sold many expensive horses, but we have also bought many expensive broodmares from around the world, so maybe we break even,” he added with a laugh while encouraging buyers to spend their money freely.

Yoshida and his brothers, Katsumi of Northern Farm and Haruya of Oiwake Farm, are the major consignors at the JRHA sale, with Shadai and Northern together providing over 54 per cent of the 475 horses catalogued. They have spent over $100m in the past decade collecting broodmares to boost their breeding stock.

Following victories by Japanese-breds with increasing frequency in Dubai, Europe, Hong Kong and Australia, there seems to be robust demand for the cream of the crop bred in Japan.

By the time of the party, 511 potential buyers had registered with JRHA, compared to 475 at the same time in 2016. Thirteen buyers from outside Japan were among the group preparing to bid, a solid number considering that steep Japanese Select Sale prices reflect the fact that the island nation offers the world’s most lucrative purses.

Among those on hand for this year’s sale are global titans such as Coolmore, which is represented by David O’Loughlin and Dermot Ryan, and Qatar’s Sheikh Fahad Al Thani, who bought the top yearling at the 2014 JRHA sale when paying ¥260m for a son of Deep Impact out of Fillies' Mile winner Listen.

Other potential buyers are on hand from Australia, Hong Kong and France, and they are joined by the powerhouse owners of Japan, such as Hajime Satomi, Makoto Kaneko and Richii Kondo.

Among the stellar offerings are a full-brother to the 2014 top-priced yearling bought by Sheikh Fahad whose family includes Henrythenavigator and Magician. Consigned by Northern Farm, the bay colt will enter the ring as lot 107 with a ¥100 million reserve price (about £680,000/€770,000), the highest reserve for the auction at which such figures are freely given to buyers as helpful information.

Three other Deep Impact yearling colts with international female families and consigned by Northern Farm carry ¥100m reserves: lot 13, a half-brother to Australian Group 1 winner and Irish Derby runner-up Seville; lot 53, the second foal of Irish 1,000 Guineas winner Samitar, by Rock of Gibraltar, and lot 132, the first foal out of multiple Argentine Grade 1 winner Safari Miss, by Not for Sale.

Shadai Farm will offer another Deep Impact colt with the same reserve price. Lot 98 is out of American Grade 1 winner Champagne D’Oro, a Medaglia D’Oro half-sister to Belmont Stakes winner Ruler On Ice.

The highlight of the foal session could well be lot 333, a Deep Impact filly out of Cheveley Park Stakes winner Donna Blini and thus a full-sister to two-time Japanese Horse of the Year and Dubai Sheema Classic winner Gentildonna.

That filly from Northern Farm also commands a ¥100 million reserve, as do two other Deep Impact foals from the same consignment: lot 319, a colt who is the first foal of American Grade 1 winner Condo Commando and lot 362, a colt out of Poule d’Essai des Pouliches winner Elusive Wave. 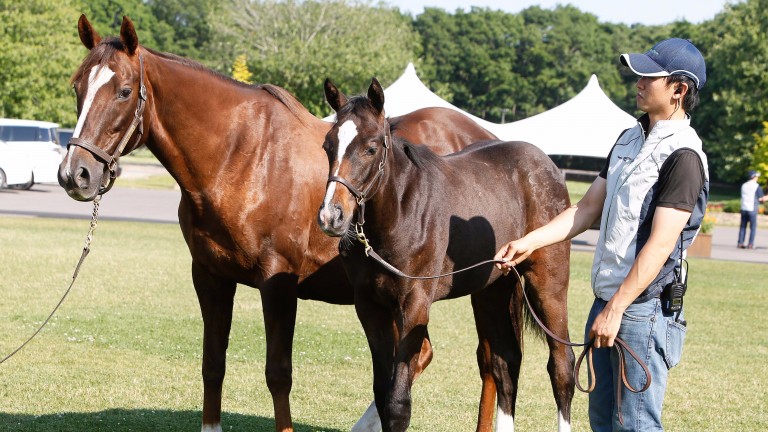