At The Sales CHELTENHAM 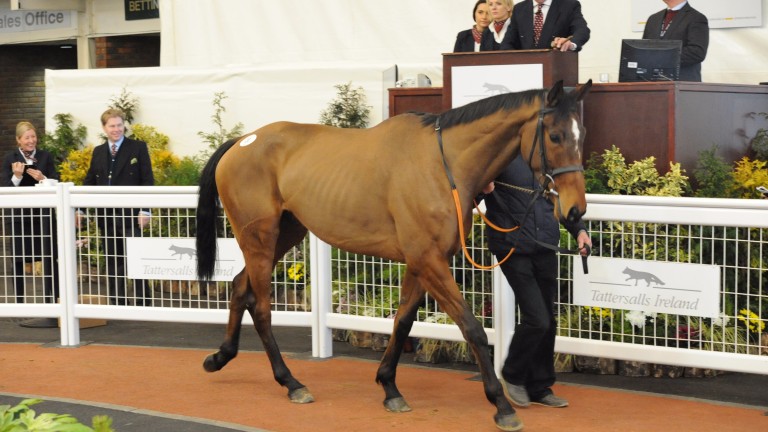 Flemenshill: son of Flemensfirth will join Colin Tizzard's stable of stars but won't be seen until the autumn
Tattersalls Ireland
1 of 1
By Lydia Symonds 8:13PM, FEB 16 2017

The record price for a point-to-pointer at auction was eclipsed at the Tattersalls Ireland Cheltenham January Sale on Thursday, when Tom Malone, bidding with Joe Tizzard, went to an eye-watering £480,000 for Oldtown winner Flemenshill on behalf of owners Ann and Alan Potts.

The four-year-old son of Flemensfirth, who was offered by the County Antrim-based Colin McKeever for owner Wilson Dennison, came to the sale after breaking his maiden by a decisive four lengths this month.

Malone, who had to fight off fierce competition from Kieran McManus to take the gelding home, was full of praise for the horse, who will join Colin Tizzard's stable of stars.

“I liked everything about him; he ticks every box for me,” he said. “The pedigree, form of the race, time, the quality of the track - there is an awful lot to like about his profile. I also loved the horse himself. He is still a shell and to be ready as a four-year-old in February, it was a bit special.

“We won’t see him until the autumn, he’ll go to grass in the summer. It’s amazing what he’s done so far and only really good horses can do that.”

In his victory at Oldtown, Flemenshill beat the Gordon Elliott-trained Defi Bleu, who was the €255,000 Derby Sale top lot last June.

“The form of the race couldn’t have been any stronger and he won the race three out, before the straight,” said Malone. “That’s when I looked down and thought: ‘Wow you’re something special.’”

The four-year-old is from the proven academy of McKeever, from which the likes of Bellshill, Blaklion and Yorkhill have recently graduated, and he shares his page with the classy pair Strong Flow and Three Musketeers.

Tizzard, his new trainer, has recently forged a strong partnership with Ann and Alan Potts, having teamed up to buy subsequent Tolworth Hurdle winner Finian’s Oscar at the Cheltenham November Sale for £250,000.

The last lot of the day provided the next best price, after On The Blind Side, a son of Stowaway, was knocked down to Tessa Greatrex of Highflyer Bloodstock on behalf of leading owner Alan Spence for £205,000.

The gelding, consigned by Glenview Stables’ Paul Cashman, won his 17-runner point-to-point at Kilfeacle last month and is from the family of two-time Grade 2 winner Knockara Beau and Listed winners Orient Sunset and Orient War.

The five-year-old will be trained by Nicky Henderson and Greatrex said: “When I saw him on Wednesday, I loved him. He’s so well put together and he has plenty of size and scope. The form works out really well as three winners have come out of the race, so it looks very solid.”

Evan Williams went to £170,000 for Sunday’s Punchestown point-to-point winner Bitingthebullet. The son of Gold Well is from the family of Gaye Chance and Gaye Brief and vendor James Doyle was pleased with the price he fetched.

“Sean [Doyle] and I bought him as a yearling,” he said “We normally only buy three-year-olds but we pre-trained the half-sister A Doll In Milan and she went well at home so we thought we should buy him as a yearling. I’m very happy with what he made and he looks to be a nice horse.”

Matt Coleman of Stroud Coleman Bloodstock made his presence felt when he snapped up two lots for a total spend of £265,000. The most expensive of the pair was £145,000 buy Frozen Flame, a son of Coolagown Stud resident Frozen Fire who finished runner-up on his only start in a Ballinaboola point-to-point this month.

Ewing has a way with Getaway

The Cheltenham sales have been a happy hunting ground for the County Antrim-based vendor Warren Ewing, and it was the same story on Thursday after both of the horses he offered made six figures, both selling to Harold Kirk working on behalf of Irish Champion trainer Willie Mullins.

The most expensive of the pair was Getareason, who finished second to Bitingthebullet at Punchestown on Sunday and was snapped up for £140,000, while the other was Sending Love, a son of Scorpion who won his maiden point-to-point at Kirkistown earlier in the month and went for £130,000.

Ewing was quick to praise young Coolmore-based sire Getaway, saying: “I really like him - I really think he could be the next big sire in my opinion. We’ve bought four foals by him on the strength of this one. I thought he would make a bit more, but I’m pleased.”

Of both of the horses he continued: “They are just two really nice proper horses and I think you'll see them winning that’s for sure and I fully expect them to get among the black-type.”

At the conclusion of the record-breaking January Sale, Tattersalls Ireland director of horses in training sales Richard Pugh said: “We're delighted with the returns of the rescheduled Cheltenham January Sale. We've sold a four-year-old point-to-point maiden winner for the highest price on record of £480,000 and concluded the sale with record-breaking results.”

Horses come under the hammer at Cheltenham next during the Festival in three weeks.