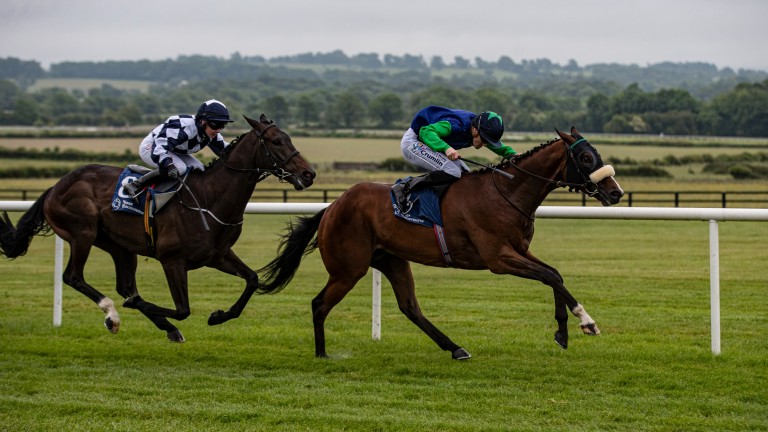 The sprinting son of the en-vogue Kodi Bear, trained by Willie McCreery and owned and bred by Noelle Walsh, had made all from a mark of 83 to strike at the Kildare track for the second time in his career on June 23.

Out of a winning Acclamation mare, Wood Ranger is from the family of Irish 1,000 Guineas runner-up Pennkenna Princess. Walsh has had a terrific season as her Knockananig Stud also bred the Oaks runner-up Mystery Angel and actually bought Wood Ranger back for €10,000 when offering him at the Tattersalls Ireland September Yearling Sale.

"I'm pleased for Noelle and her husband Jim, they couldn't get a bid for him at the sales and he's already won about €47,000," McCreery said.

"He's a nice, solid horse who has been very consistent and given them a lot of fun - it was nice that the first time Jim and Noelle could actually see him run was when he won at Naas the other week.

"It's only a bit of a shame that we had him in the Scurry [at the Curragh] on Saturday, which is a very valuable race, but it closed before the sale was finished and we didn't keep him in as obviously we didn't know where he was going."

Those who did not quite make the cut from the owner-breeder's fabulous staying families are often in demand for the National Hunt and the statement applied to Ebasari, a three-year-old by Lope De Vega who had shown most promise in six starts for Michael Halford when staying on nicely for third in a mile and a quarter handicap at Roscommon last month.

Ebasari is from the Gold Cup-winning family of Estimate and Enzeli, out of a stakes-placed half-sister to the Prix de Royallieu winner Ebiyza.

The Aga Khan had a large offering among 18 horses who were available through an entirely online auction which accepted bids through a 24-hour window between Monday and Tuesday. Tadhg O'Shea bought the once-raced Oasis Dream gelding Hamidabad for €10,500, while Thomas Gammell collected the unraced Iffraaj three-year-old Alvaniy for €10,500.

Pick of the draft registered by Jim Bolger was Business Speak, a Dawn Approach three-year-old who is still a maiden but has shown consistent handicap form from a mark in the mid-70s. He was bought by the Summer Racing Syndicate for €25,000.

Goffs group chief executive Henry Beeby said: “We are pleased with a satisfactory level of trade in our Online Summer Sale which proved once again that Goffs Online is a timely and successful platform for selling horses in training to an international audience at relatively low cost to the vendor.

"Goffs Online has turned over more than €10.5 million since its introduction in 2020 and is now a permanent fixture at Goffs, offering an additional avenue to the market place at all our sales both in person and virtual."

Who possesses the sire power to succeed the great Galileo? (£)

FIRST PUBLISHED 5:05PM, JUL 13 2021
The first time Jim and Noelle could actually see him run was when he won at Naas the other week