Excelebration colt made it two from two at Chantilly on Wednesday 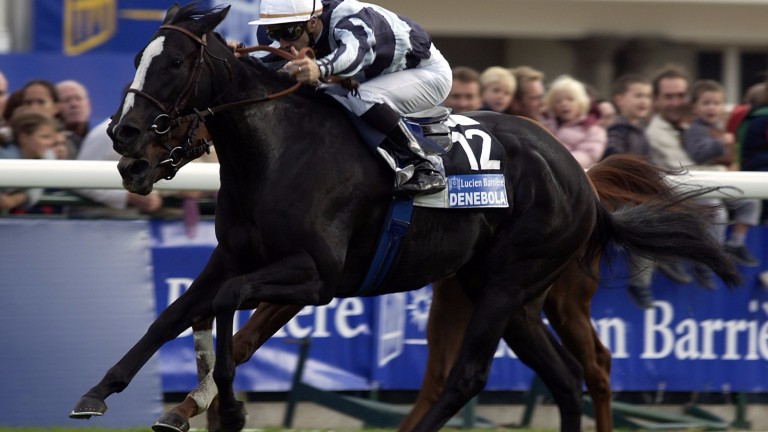 Denebola: dam of Ratiocination wins the Prix Marcel Boussac at Longchamp at two
Edward Whitaker
1 of 1
By Ollie O'Donoghue 8:30PM, MAY 10 2017

Ratiocination can be defined as "a reasoned train of thought" and it would not be beyond the realms of possibility to envisage Excelebration's colt Ratiocination as another leading Classic contender from his sire's first crop.

He would follow on from Barney Roy's fast-finishing second in the 2,000 Guineas at Newmarket on Saturday.

Ratiocination first impressed when winning a hotly contested maiden at Chantilly in April by a short head from Parabellum and Oshayger. Parabellum was a €2.6 million yearling purchase for connections at Arqana August in 2015, while Oshayger is a Frankel colt out of Breeders' Cup Filly and Mare Turf heroine Zagora.

Trained by Pascal Bary and ridden by Stephane Pasquier, Ratiocination confirmed that promise by winning a conditions stakes at the same course on Wednesday by an impressive four lengths from Soaring Eagle and the Andre Fabre-trained Masks of Time.

Bary has taken a detour with the colt - the Poulains is this Sunday - and he remains entered for the Prix du Jockey Club.

A Flaxman Holdings homebred, Ratiocination is a half-sister to Beta Leo, dam of Prix de la Grotte scorer Senga - who is a leading chance for her sire Blame in Saturday's Poule d'Essai des Pouliches - and out of the Prix Marcel Boussac winner Denebola.

Denebola hails from one of the strongest Flaxman families being a half-sister to Prix Morny third Loving Kindness, and also the dam of Prix du Moulin winner Maxios and 2004 Arc hero Bago, out of 1,000 Guineas third and dual Group 1 winner Coup De Genie.

Coup De Genie is a sister to the champion juvenile and 2,000 Guineas runner-up Machiavellian, and a half-sister to Prix Jacques le Marois scorer Exit To Nowhere and the Pouliches second Hydro Calido.

They in turn are out of Coup De Folie, who was third in the Marcel Boussac in 1984, the race won 29 years later by Denebola.

The stud fee for the son of Exceed and Excel has steadily dropped from €22,500 to €10,000 in what is now his fifth season at Coolmore in Ireland.

Should Ratiocination's performances continue on an upward trajectory, and following Barney Roy's exploits last Saturday, his fee might not stay the same for much longer.

FIRST PUBLISHED 8:30PM, MAY 10 2017
He first impressed when winning a hotly contested maiden at Chantilly in April by a head from Parabellum and Oshayger