At The Sales SALES SUCCESS

'Bungle', Gregorian and Es Que Love all in demand at Goffs 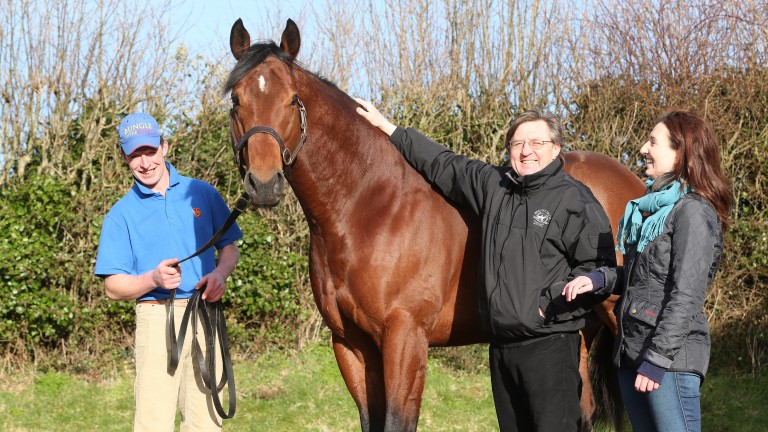 Bungle Inthejungle with Maurice and Madeline Burns (both right) at Rathasker Stud
CAROLINE NORRIS
1 of 1
By Aisling Crowe 8:29PM, SEP 28 2017

Launching the career of one stallion is a fraught enough business but starting off three new stallions in the one season is treble the trouble. Happily for the father and daughter team behind Rathasker Stud, Maurice and Madeline Burns, first-crop yearlings by the trio shone at the Goffs Sportsman's Sale on Thursday.

Bungle IntheJungle, or just Bungle as he is known to all, was the only sire to have two representatives in the top ten at the sale with two fillies selling for €55,000 and €52,000 respectively.

Gregorian, who stands at the National Stud in Newmarket in partnership with Rathasker Stud, also made an impact with his yearlings on Thursday, led by a colt consigned from Mark and Paula Flannery’s Egmont Stud who sold for €60,000.

Rathasker Stud themselves sold a son of Gregorian, the first foal of a Shamardal mare who won six races, for €40,000.

Es Que Love might have been overshadowed by his team mates on the headline figures but the three yearlings who changed hands in the session all posted significant returns on the €5,000 covering fee he stood for in 2015.

The average for the three sons of the Lennox Stakes winner was €18,000 and the top price of €36,000 was given by Michael Dods for Woodtown House Stud’s half-brother to three winners from three siblings to have raced.

Maurice Burns said: “The first year is the most important for a stallion because it is the start of everything - the first books, first foals, first yearlings and first runners - so we are delighted the three stallions have sold so well.

"We're looking forward to seeing them on the track but we won’t be able to decide who to cheer for,” he added with a chuckle.

A homebred filly by 'Bungle' sparked the sale into life on Thursday morning when, just four lots into proceedings, she sold to Matt Coleman for €52,000. Out of Indienne Moon, she is a half-sister to Listed Pipalong Stakes winner Audacia and their dam is a half-sister to Group 2 scorer Ajigolo.

Later in the day Merrick Francis, taking instructions from Clive Cox on the phone, went to €55,000 for a 'Bungle' half-sister to Godolphin’s recent Prix des Chenes winning juvenile Stage Magic. Bred by Paul and Billy McEnery, the filly is a granddaughter of Magic Mission, winner of the Grade 3 Royal Heroine Stakes.

A common theme united the identity of the purchasers of those popular yearlings by Rathasker’s new boys.

“They're trainers’ horses,” remarked Maurice Burns. “The yearlings look like runners - they are good hardy types who are ready to rock and roll. They've all gone to good hotels; the names are all the ones you want to see on the dockets so they'll all be given a chance.”

'Bungle' and Es Que Love stand at €5,000, while Gregorian is priced at £4,500. Gregorian posted the best average price with his five yearlings selling for €32,000, which represented a return of more than six times his covering fee.

'Bungle' was responsible for six yearlings in Thursday’s sale and they sold for an average of €28,333, almost six times his 2015 fee.

FIRST PUBLISHED 8:29PM, SEP 28 2017
We're looking forward to seeing them on the track but we won’t be able to decide who to cheer for