Richard Frisby and Mags O'Toole fight it out for session-topper 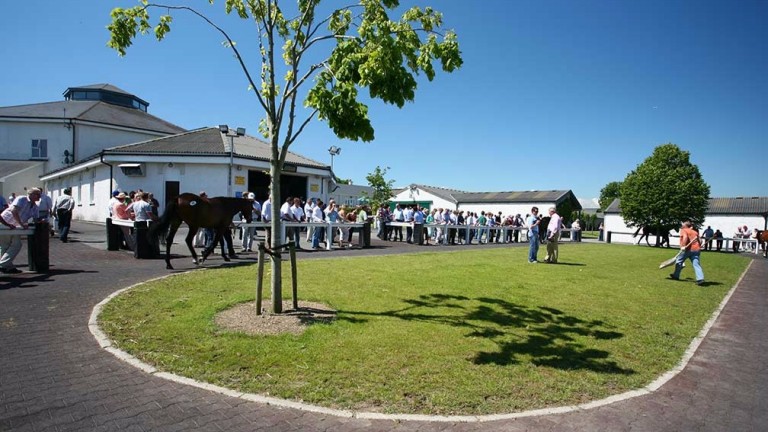 The rarer a commodity is, the more valuable it becomes, and so it proved at the Tattersalls Ireland November National Hunt Sale on Sunday when proceedings were topped by one of only two yearlings on offer by the late Saddler Maker, sire of Grade 1 winners Apple's Jade, Alpha Des Obeaux and Bristol De Mai.

The gelding in question, already named Luck Of Starlett, had attracted a lot of attention since his arrival at Fairyhouse thanks to the combination of his fashionable sire and impressive physique.
The attention led to a bidding war between Mags O'Toole and Richard Frisby for the lot, who is the first foal of the unraced Martaline mare Fancy Starlett and was offered by Stephen Kemble Bloodstock.

Frisby was determined to get the imposing dark bay gelding and he held sway over O'Toole, who bowed out at €54,000.

"He's a gorgeous horse," said the winning bidder. "He was probably the standout horse here today and it was a hard buy. He will come back here for resale as a three-year-old."

Paul Hennessy was the buyer of the other Saddler Maker yearling, paying €30,000 for Michael Tallon's gelding called Frimeur De Lancrey, from the family of Vroum Vroum Mag.

The gelding is the first foal out of the unraced mare Roche D'Or, who is a half-sister to Grade 1 winner Bitofapuzzle and the Listed-winning hurdler Golden Gael.

"He's a lovely horse with a nice pedigree and I like the sire a lot," said Mahon. "This horse has size, scope, everything you want in a horse. He will probably stay in Ireland for the moment but I'm not sure which of my clients will get him - they can fight it out!"

Monsun was in the headlines last week with yet another Melbourne Cup winner and his son Shirocco was the most popular stallion represented at Fairyhouse on Sunday. Seven progeny of the sire of Champion Hurdle heroine Annie Power were sold for a total of €104,000.

Cork father and son Tom and Barry Fitzgerald were handsomely rewarded for their prescience with one who they bought as a foal at the 2015 renewal of this sale, and sold him on Sunday for €46,000 - for a profit of €30,000.

The good-looking bay is the fourth foal out of the Grade 2-placed Over Sixty and his Kayf Tara half-brother Spirit Of Kayf has already won a bumper and maiden hurdle for Sandy Thomson.

John Monroe of Inishfree Farm was the successful bidder, paying €46,000 for the gelding and the new owner has plenty of options for his purchase.

"I loved the horse when I saw him," Monroe said. "I'll keep an open mind about future plans for him. He could come back here as a three-year-old or he could go into training."

The daughter of Beat Hollow who is out of the legendary hurdling mare Quevega was knocked down to Keatingstown Bloodstock for €50,000, the highest price for a filly by some margin on the day.

Despite an improvement of four points in the clearance rate to 64 per cent, overall figures were down on the opening day of last year's sale.

FIRST PUBLISHED 7:00PM, NOV 6 2016
He was probably the standout horse here today and it was a hard buy