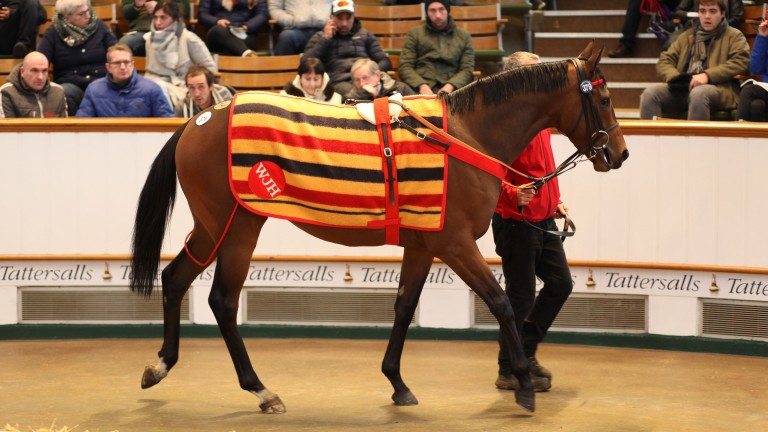 If you think hen's teeth are a rare thing, then you should trying finding a colt in training with genuine Classic credentials at public auction.

However, that is precisely what was served up when Willie John came on the market during the second leg of the Tattersalls February Sale on Friday, and it was Roger Varian who emerged victorious from the high-stakes showdown with an auction-record bid of 1,900,000gns.

It had been a relatively low-key day of trade until former William Haggas-trained Willie John tiptoed between the acorns, but the presence of the unbeaten son of Dansili saw bids begin to rain down from all sides of the Park Paddocks ring.

Oliver St Lawrence, Ed Dunlop and Hugo Lascelles got the ball rolling with a rapid-fire exchange, and by the time the likes of Anthony Stroud and Julian Dollar joined in the bids were coming so thick and fast that potential purchasers could barely get their hands in the air quick enough.

It eventually boiled down to a duel between Cheveley Park Stud's Chris Richardson and Roger Varian, who were situated in the two stairwells opposite Edmond Mahony's rostrum, and it was the Newmarket-based trainer that delivered the decisive nod of the head to signal a bid of 1,900,000gns on behalf of Sheikh Mohammed Obaid.

Willie John, a 325,000gns Book 1 yearling, was another February Sale lot to have been part-owned by disgraced South African billionaire Markus Jooste, who has been forced to close down his global racing empire amid a string of accountancy fraud allegations.

The three-year-old made the track just once while under the care of Haggas, but created a big impression when overcoming clear signs of inexperience to land a Yarmouth novice stakes by clear water.

"He obviously won well on his only start and the owner already has an interest in the family," said Varian. "He bought the Dubawi colt out of the mare in the autumn and identified this colt as a horse he'd like and we're very lucky to have been able to do the steering for him. I'm looking forward to getting to know the horse a little better now."

During last year's renewal of Book 1 of the Tattersalls October Yearling Sale Varian went to 2,600,000gns to secure Willie John's half-brother by Dubawi.

The pair were bred by Meon Valley Stud and are out of dual Group 1 winner Izzi Top, a daughter of Pivotal whose two runners to date remain unbeaten, with her Oasis Dream colt Dreamfield having landed two races for Godolphin.

"He's a promising horse and he's got a great pedigree," continued Varian. "Those autumn maidens at Yarmouth are often pretty strong."

The son of Dansili was offered with entries in the Derby and the Irish equivalent, but the Carlburg Stables-based handler was in no rush to identify a starting point for his new charge.

"I don't think we need to worry about where he's going to debut for us - I'm just looking forward to getting him in the yard," he said, before offering an update on Willie John's 2,600,000gns Dubawi half-brother, saying: "He's cantering and looks a jolly nice horse but it's still early days."

525,000gns Key To My Heart
B f Galileo - A Z Warrior (Bernardini); sold by The Castlebridge Consignment to BBA Ireland in 2018

The day's second-top lot was Relent, a daughter of Dansili offered by Juddmonte who went the way of Cathy Grassick for 220,000gns. The unraced three-year-old was acquired on behalf of Yvonne Jacques of Carisbrooke Stud, the operation formerly known as Lady Whent's Raffin Stud.

Relent is a half-sister to Grade 2 winner Projected and is out of a half-sister to the globe-trotting Flintshire, while Prix de l'Arc de Triomphe heroine Enable also appears further down the page.

"She has the pedigree and the looks," said Grassick, who was accompanied in the bidding area by her client. "Yvonne Jacques has set up Carisbrooke Stud, which is being managed by Joe Grimwade, and she's looking for top-class stock and this filly is a no-brainer with everything that's happening on the page."

The relationship between Grassick and Jacques, who has horses in training with William Haggas, Marco Botti, Jeremy Noseda and Varian, has blossomed following the purchase of two yearling fillies, Appealing and Grandeur.

"Appealing, a €7,500 yearling, was second in the Yellow Ribbon, and the other was Grandeur who was a multiple Grade 2 winner and Grade 1-placed in America. That was the start of a beautiful relationship! When you start off with two fillies like that it's a dream come true," said Grassick.

"I think we'll have to look very seriously at Nathaniel," added Grassick on the subject of coverings for Relent. "Given the fact that she's a Dansili and Enable is there on the page."

This progressive staying handicapper Zenon is set to join the powerhouse stable of Willie Mullins after Harold Kirk went to 120,000gns to secure the son of Galileo. The four-year-old boasts a peak Racing Post Rating of 101 having landed two handicaps in 2017 while under the care of John Gosden.

"He's a strong horse and a good stayer," said Kirk. "He came recommended, and we've been lucky with John Gosden in the past through the likes of Nichols Canyon and Thomas Hobson.

"This horse is already rated 96 on the Flat, so he's no slouch. We'll get him gelded and then he could go jumping before going down the staying route on the Flat."

Zenon is out of the King Charlemagne mare Jacqueline, a leading filly in Indian at 6f to 1m4f.

After a lukewarm beginning it fell to another horse that had been part-owned by Jooste to get proceedings underway in earnest, as Federico Barberini went to 60,000gns for Giant's Treasure on behalf of Steve Parkin's Clipper Logistics.

The four-year-old son of Shamardal, a 525,000gns Book 1 graduate, made just the one start for Jooste and the China Horse Club, but went some way to justifying his lofty yearling price when running out an impressive winner of a Wolverhampton maiden last March for Richard Hannon - who was among the underbidders.

"What we've seen of him has been impressive," said Barberini. "He's been off a while but he could be a serious horse - it was nice to see that his trainer was brave enough to bid on him himself.

"He has been bought for Clipper Logistics but there is no plan yet. I don't even know who will train him. He's very good looking - he was an expensive yearling - and he has a pedigree as well. It's very exciting to have got him."

In total seven horses that had been under the part ownership of Jooste were offered across the two days, with the septet registering a combined 3,738,000gns, 47 per cent of the aggregate sales.

In his end of sale address, Tattersalls' chairman Edmond Mahony said: "Last year's Tattersalls February Sale reached unprecedented levels for this fixture with turnover of more than double the record 2016 sale and an average price up 56 per cent, so to surpass those figures is another phenomenal achievement, especially with a smaller catalogue.

"The obvious highlight was the 1,900,000gns sale of the outstanding Classic prospect Willie John and it is a wonderful endorsement of the February Sale that, although one of our newer and smaller sales, it now holds the distinction of producing the highest priced colt in training ever sold at public auction in Europe.

"The 500,000gns previous record price for the February Sale has been surpassed four times in the past two days, demonstrating beyond any doubt that the February Sale is a sale which consistently produces optimum prices for quality thoroughbreds, while at the same time serving as a perfect seasonal outlet for stock at all levels of the market.

"As ever, the international demand has been a feature of the sale and in addition to strong European participation, buyers from throughout the Gulf region, America, Hong Kong, Japan and South Africa have all made a significant contribution to a record breaking start to 2018 at Tattersalls."

FIRST PUBLISHED 6:20PM, FEB 2 2018
He obviously won well on his only start and the owner already has an interest in the family