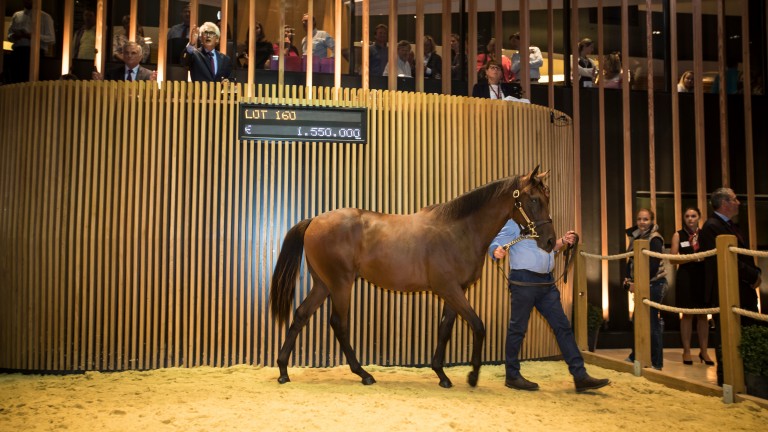 This Dubawi colt is the most expensive yearling sold at Arqana since John Ferguson paid a record-breaking €2.6m for Parabellum in 2015
Patrick McCann
1 of 1
UPDATED 2:14PM, AUG 21 2017

Presenting owners and agents with a Dubawi colt out of a Group 1 winner is a tried and tested method of producing an eye-wateringly expensive yearling – see the pair out of Fallen For You and Zee Zee Top who led Tattersalls October Book 1 at 2,600,000gns apiece last year for example – and a son of Falmouth Stakes heroine Giofra repeated the trick in the final session of the Arqana August Yearling Sale on Sunday.

The offering from Jurgen Winter's Haras de la Perelle, who bred and campaigned Giofra, was the subject of a tug of war between Angus Gold representing Shadwell – buyer of that colt out of Zee Zee Top last year – and Kerri Radcliffe, who has been busy stocking up for the emerging force of Phoenix Thoroughbreds at the sales this year.

Bidding crept up in €50,000 increments in the tense final exchanges and when auctioneer Eric Hoyeau managed to tease one more nod from Radcliffe after Gold had offered €1.5 million it sealed the colt's fate as a future Pheonix Thoroughbreds flagbearer.

At €1.55m, he is the most expensive yearling sold at Arqana since John Ferguson paid a record-breaking €2.6m for Parabellum, another Dubawi colt, in 2015.

"He was the nicest horse in the sale,” reported Radcliffe. “He's by a super stallion out of a Group 1-winning mare: it doesn't get much better than that. He'll be trained by Monsieur Fabre."

Master trainer Andre Fabre will also receive the No Nay Never colt bought by Radcliffe for €480,000 in Saturday's session.

The Dubawi colt is the second foal out of Giofra, a daughter of Dansili and Prestige Stakes winner Gracefully, but the first to come on to the open market.

Her oldest offspring is a two-year-old filly named Georgine in training with Alain de Royer-Dupre for Perelle.

Gold gained ample compensation for being underbidder when successful not long after for an Invincible Spirit half-brother to Cheveley Park Stakes third High Celebrity at €420,000.

The colt, from Haras des Capucines, is out of High Surf, a winning daughter of Storm Cat and multiple Grade 1 scorer Surfside. He is by a sire Shadwell has enjoyed success with before, as the high-class sprinter Muthmir and Listed winner Ektihaam have carried Hamdan Al Maktoum's blue and white silks.

Shadwell's homebred two-year-old colt Eqtidaar, an impressive winner on debut at Nottingham for Sir Michael Stoute on Friday, is another for Invincible Spirit.

“The colt is from a good female family and Sheikh Hamdan liked him,” said Gold. “He's by a world-class stallion and Eqtidaar looks very exciting. If this colt proved good enough he'd make a lovely stallion prospect.”

The yearling half-sister to this year's Derby hero Wings Of Eagles will be campaigned by a new partnership between Qatar Racing and a Chinese investment group after being knocked down to a bid of €750,000 from David Redvers.

The filly from the first crop of brilliant miler Kingman was offered by the famed Normandy nursery Haras de Montaigu, who bred her out of Poule d'Essai des Pouliches third Ysoldina, also the dam of Listed-placed pair Gyrella and Torentosa and a half-sister to high-class fillies Belle Et Celebre and Whortleberry. 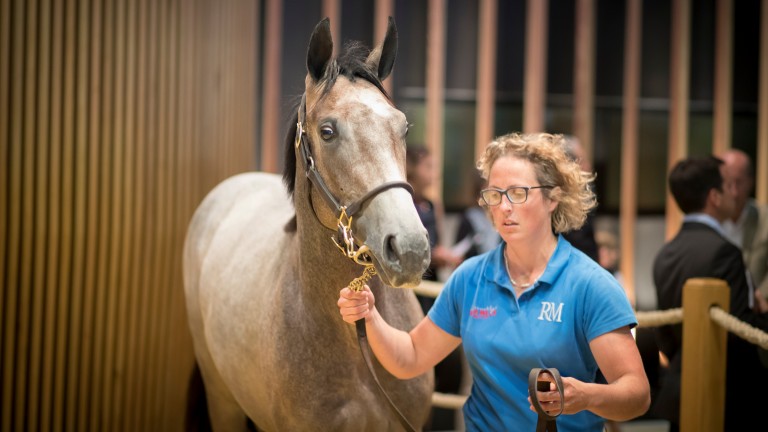 The half-sister to Wings Of Eagles, by Kingman, who sold for €750,000
Patrick McCann

"She's been bought for a new syndicate of Qatar Racing and some new Chinese clients of Ghislain Bozo of Meridian International, who, if they're very keen, I'm sure will become large and long-term players in this industry,” reported Redvers.

“They've invested in the breeze-ups with us and in a filly yesterday, and we're basically trying to do something nice and long-term for them, so this filly has been bought to be a racehorse first and for the breeding shed second, when hopefully she'll join a very select broodmare band.

“It's not often you get the chance to buy a half-sister to a current Derby winner, and from such very good breeders as well.”

Many buyers are wooed to Deauville to secure domestically bred horses eligible to win lucrative premiums in France, but Redvers said that would not necessarily be the case this time.

“She'll probably come back to Longholes and be broken in, then we'll all come to a decision over where she'll go into training,” he said.

“Anything could happen at this stage; obviously she's French-bred but at this sort of level we're not worrying about premiums, only about doing what's right for her."

Having thanked Redvers for his purchase, Sybille Gibson of Haras de Montaigu said: “She's a tremendous filly and we were very hot on her. She had lots of admirers in showings.”

It has been quite the year for Montaigu as not only did the stud breed the Derby winner – who graced the cover of the Arqana catalogue, having been purchased there for €220,000 two years ago – but it also bred stakes winners Fauguernon and Princess Asta and owns Shamiyra, the young dam of Grand Prix de Paris scorer Shakeel, having bought her for €190,000 from Arqana in 2014.

Gibson reported Shamiyra is in foal to The Gurkha, while their other dam of a 2017 Group 1 winner, Ysoldina, is pregnant to Siyouni.

No Nay Never stock in demand

One frontrunner who is emerging, in terms of commercial appeal at least, is No Nay Never. The young Coolmore sire, who won the Prix Morny on sales weekend at Deauville four years ago, was represented by a colt who sold to Kerri Radcliffe for €480,000 on Saturday and he was in the spotlight again on Sunday when another son sold to Mayfair Speculators, Peter and Ross Doyle and MV Magnier for €400,000.

It helps, of course, that No Nay Never is the first stallion at stud in Europe by Scat Daddy – one of the biggest breeding stories of the year after he struck with four individual stakes winners at Royal Ascot including the top talents Caravaggio and Lady Aurelia. 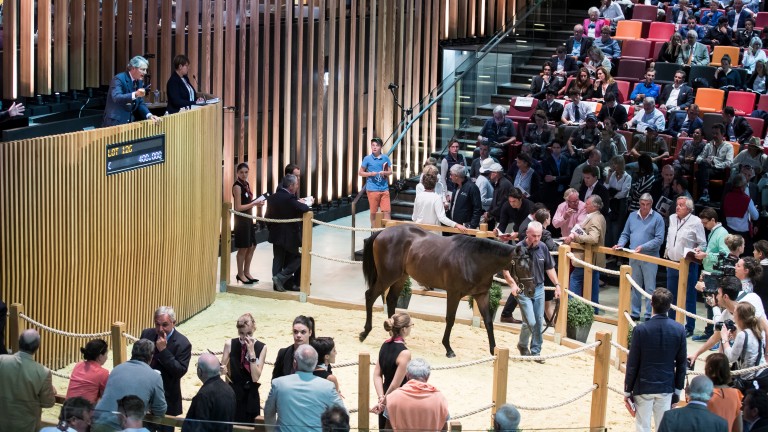 Sunday's expensive colt, presented by Camas Park and Glenvale Studs, is out of the Group 3-winning Peintre Celebre mare Chaibia, who hails from the family of Derby winner Erhaab.

“We like to support the new stallions and we were underbidders on the No Nay Never [colt] bought by Kerri Radcliffe,” said Peter Doyle after Magnier signed the docket. “This one is a very nice individual and we'll take him back to Ireland and make a decision on who will train him.”

The €400,000 mark was also hit by a son of Dubawi who is the first foal out of German Group 3 winner Daksha, a daughter of Authorized descended from champion Golden Opinion. The buyer was a first-time visitor to Deauville from the far east.

"It's my first time at Arqana and I've come here looking for colts by the likes of Frankel and Dubawi,” said the Newsells Park Stud-consigned colt's new owner from Japan, Koichiro Yamaguchi.

Only four lots later Yamaguchi's illustrious compatriots Shadai Farm got on the scoresheet by giving €280,000 for a Camelot filly out of an unraced Danehill Dancer half-sister to Group winners Anabaa's Creation and Leo's Startlet as well as the dam of this season's Prix de Diane runner-up Sistercharlie.

Some high-priced unsold lots marred trade on Sunday, with an Intello filly from Coulonces returning home despite bidding having reached €430,000 and, notably, the brother to last year's European champion Almanzor going back to vendor Haras d'Etreham after his price stalled at €500,000.

The decision not to sell the Almanzor brother is eye-catching considering the cost of the material to produce him: Etreham bred the colt from its own stallion, Wootton Bassett, when he stood at just €4,000, and it bought his dam Darkova for just €16,000.

End-of-sale statistics showed the clearance rate during the first two days of trade had taken a hit, falling from 80 per cent in 2016 to 75 per cent.

Turnover was on a par with last year, although with 19 fewer lots offered this time around, the average rose by 13 per cent to €241,342.