By Nathaniel and from the family of Anapurna, this is a family in form 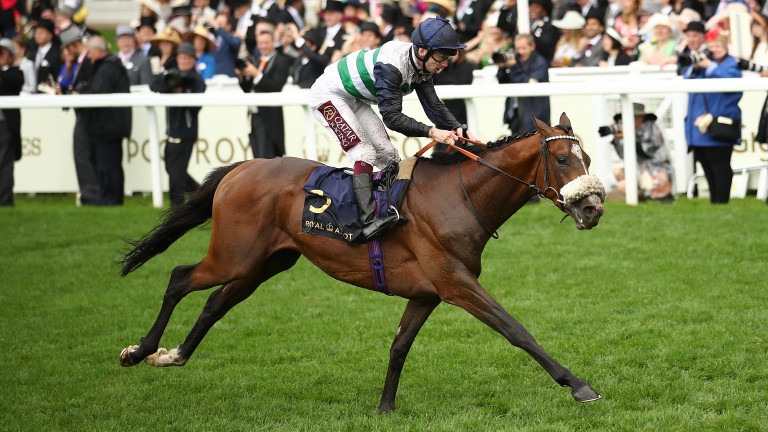 Dashing Willoughby, a determined winner of the Group 2 Queen's Vase from the Galileo colts Barbados and Nayef Road at Royal Ascot on Wednesday, has a pedigree that combines some of the big breeding stories of the Flat season.

Nathaniel, a beautifully bred son of Galileo, saved many of his best efforts for Ascot, giving future Melbourne Cup winner Fiorente a five-length beating in the King Edward VII Stakes at the royal meeting of 2011 and claiming the notable scalps of Workforce and St Nicholas Abbey to land the King George VI and Queen Elizabeth Stakes back at the track a month later. He also went down by only a nose to Danedream in the defence of his King George title one year on.

Dashing Willoughby is Nathaniel's 15th black-type winner since his first two-year-olds hit the track in 2016, the roll of honour headed by Group 1 laureates Channel, Enable and God Given.

The emergence of a high-class male representative will no doubt please the sire's custodians as those three elite winners and three out of four of his other previous Group winners – Highgarden, Pilaster and Precious Ramotswe – have all been fillies.

Dashing Willoughby's female family is also buzzing with relevance. He was bred by in-form operation Meon Valley Stud, whose distinctive black and white silks were carried by close relation Anapurna to win the Oaks last month.

He is the second foal out of Miss Dashwood, a four-time handicap winner between eight and a half and 12 furlongs. The dam is by Dylan Thomas – also broodmare sire of this year's star three-year-old colt Persian King – out of Warwickshire Oaks winner Dash To The Front, making her a half-sister to dual Group 1 victress Speedy Boarding.

Dash To The Front is in turn a Diktat half-sister to Listed winner and Yorkshire Oaks runner-up Dash To The Top, the dam of Anapurna. The siblings are out of Millennium Dash, a daughter of Nashwan and the brilliant Milligram, and Milligram was a daughter of one of Meon Valley Stud's foundation mares, 1,000 Guineas heroine One In A Million.

Miss Dashwood has no two-year-old produce but has a Lope De Vega yearling filly and a Mukhadram colt foal.

Meon Valley Stud sold Dashing Willoughby to Balding for 70,000gns at Book 1 of the Tattersalls October Yearling Sale and the colt now carries the colours of Mick and Janice Mariscotti.

In another touch of pertinence, the Mariscottis have been in the news for selling their Derby Day handicap winner Le Don De Vie to Aziz Kheir for £460,000 at the Goffs London Sale on the eve of Royal Ascot.

Success across the Channel for Newsells Park's Nathaniel

FIRST PUBLISHED 4:11PM, JUN 19 2019
Miss Dashwood has no two-year-old produce but has a Lope De Vega yearling filly and a Mukhadram colt foal

Can Battaash make it six out of six first time out? Graeme Rodway gives his view 'I think he has a big chance' - will Guineas hero Poetic Flare strike at Ascot? One trainer, one jockey, one horse and one race to note on Royal Ascot day one 2021 St James's Palace Stakes at Royal Ascot: the runners, the odds, the verdict Everything you need to know about day one of Royal Ascot on Tuesday Royal approval: King's Lynn and Oisin Murphy going all out for Ascot Group 1