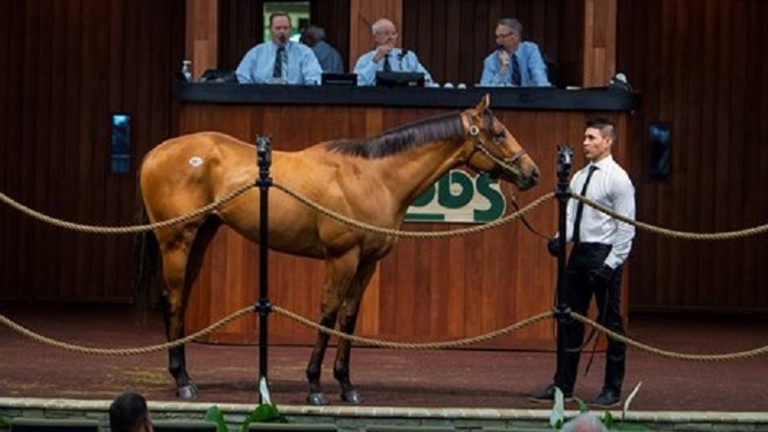 The Quality Road colt who topped the second session at the OBS Spring Sale
Joe DiOrio
1 of 1
By Michael Compton/Meredith Daugherty of Bloodhorse 12:05PM, APR 22 2021

The Wednesday session of the Ocala Breeders' Sales Spring 2-Year-Olds in Training Sale improved with time as stronger prices and even more competitive bidding than what was achieved during Tuesday's opener rocketed the day's sales to another level.

"I think we certainly picked up where we left off yesterday, and I think the action was just as good if not better," said OBS director of sales Tod Wojciechowski. "We're continuing to move forward into the next two days."

Topping the day on Wednesday were two seven-figure sales. The first to achieve the million-dollar mark was Hip 381, a colt by Lane's End stallion Quality Road, who was purchased for $1.5 million by bloodstock agent Marette Farrell on behalf of Speedway Stables.

"[Speedway Stables'] Peter Fluor and KC Weiner asked me who my favourite horse in the sale was," said Farrell. "My whole team here, Tescha von Bluecher and Zoe Cadman, every one of us absolutely loved this horse. He had the composure of a real racehorse. He's physically spectacular and he's got the pedigree."

Consigned by de Meric Sales, agent, the colt was bred in Kentucky by Bart Evans and Stonehaven Steadings out of the Grade 2-winning Najran mare Wasted Tears. He worked an eighth-mile in :10 during the sale's second under tack show session on April 13 in Florida.

"They (Speedway Stables) have already had Grade 1 success with Roadster, by Quality Road, and this horse really looked the part," said Farrell, adding that the horse will go to the stable of Hall of Fame trainer Bob Baffert.

"They're thrilled to have them. I was worried we might [have to go that high]. They buy very few horses so they always try and zone in on one they really love and they want the best that they can buy."

The journey to the OBS sales ring was a somewhat unconventional one for the colt, who was sent through the ring first as a yearling by his breeder at the Keeneland September Yearling Sale, where he was an RNA on a final bid of $385,000.

"He's been a class act from day one, from the moment he entered the world," said Stonehaven Steadings' Aidan O'Meara.

"He was probably the best-looking colt we've raised on the farm to this stage. He went on as a yearling and kind of got unlucky at the September sale with the Covid deal and he drew Hip 10 on top of all that. We had very high expectations going out there before the sale, but then we got our hip number and knew we were going to be compromised.

"We went out and RNA'd him for what he RNA'd for and we were probably about as disappointed as I've been coming down from the ring for what we thought of him and everything. We had a huge amount of faith in him and De Meric bought into him after that. He rolled down here and the rest is history. They've loved him."

O'Meara and his wife, Leah, maintained 70 per cent interest in the colt when the De Merics decided to buy in.

"He is an unbelievable horse," said Tristan de Meric. "He has been straightforward and classy since day one. He's a horse we've always loved. I'm glad it all fell in line for him. He's a beautiful horse, and we had very high expectations for him. He never missed a beat. He kept getting better and better all year.

"We loved his angles and the way he moved. You just can't fault the horse. He is correct and he does everything right. He is a hard horse to knock. It is hard to put into words how special it is. We all work so hard, and a lot goes into it. To sell one like this makes it all worthwhile." 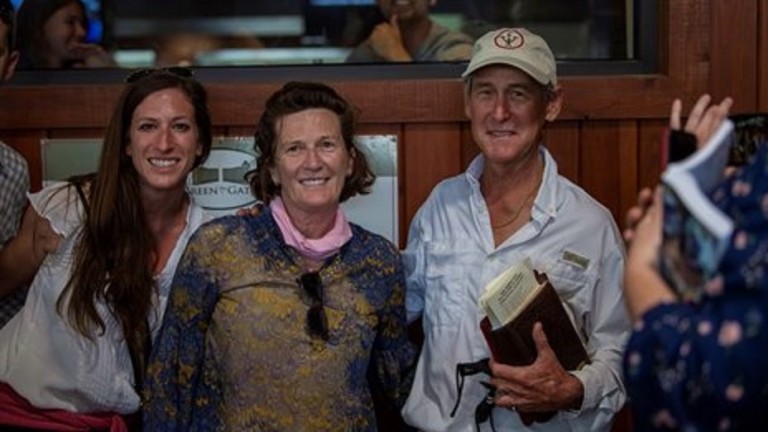 Leah O'Meara said: "He just grew up and became a strong colt, like you would expect him to be. The best part about it was that he showed what he always had. We've sold multiple foals out of this mare and she's definitely helped the farm. She's been really special to us, and we're really thankful for her and for Bart Evans."

The sale was doubly special for the O'Mearas as the colt is the first bred and raised on the farm to achieve a seven-figure sale price tag.

"It's nice when a horse of that quality that you think so much of goes on and validates himself like he did today," said Aiden O'Meara. "We're obviously super excited to see where he goes from here. A lot of these sales toppers are some of the better ones out of here and go on to proper success.

"It's huge for us. When you're a medium-sized operation like ourselves, we're constantly in a building mode and we're constantly trying to improve year over year on what we've done today. This has taken us to a whole other level.

"Our stock that we have at home are our best homebreds set to come to auction this year, the ones hitting the ground on the baby side of things, as far as stud fees and the quality we have coming out of the mares. We have had some nice mares the last few years. We're trying to build up the broodmare band and step up."

He added: "I'm delighted for the colt but I'm also delighted for the mare because she's been so good to us. She's been a little bit unlucky with some of the runners that didn't get to get on as well as you thought they might have had as far as racing.

"Her [yearling] Mendelssohn filly is the best looking filly we have on the farm this year. We're hoping the colt goes on. We will see where life takes him, but he's certainly gone in the right direction so far."

The second horse to hit the seven-figure mark was Hip 463, a filly by Arrogate consigned by Mayberry Farm, agent, and purchased by Katsumi Yoshida via the internet for $1m.

Bred in Kentucky by Town & Country Horse Farms out of multiple Grade 2 winner and multiple Grade 1-placed Amen Hallelujah, she was purchased as a yearling by Nice Guys Stables for $150,000 from Taylor Made Sales Agency's consignment to the Keeneland September Yearling Sale and breezed an eighth-mile in :10 during the under tack show.

"The quality of horses that they bring seems to step up every year no matter what. They adapt and they evolve and the quality just gets better and better."

With two more days of trade left to go and many of the buyers still on the grounds looking to buy, there is sure to be stiff competition for those horses at the top of the market as well as across all levels for those buyers hoping to fill their quotas early.

"It seems like [the market] has been pretty strong," said bloodstock agent Jacob West. "All these sales pick up momentum. I don't know if people get more comfortable spending more money after the first day, but it always seems like when you have a multiple-day sale, the first day might be a little slow, but the second day picks up and the third day and so on.

"I think the third and fourth day here will be tough, especially for those horses we all land on. But, for me, talking to consignors, even some horses they thought might be on the lower end are getting sold well. It's a healthy, strong market it seems like, but when the stars align on the big ones you get rewarded."

FIRST PUBLISHED 12:05PM, APR 22 2021
He had the composure of a real racehorse. He's physically spectacular and he's got the pedigree