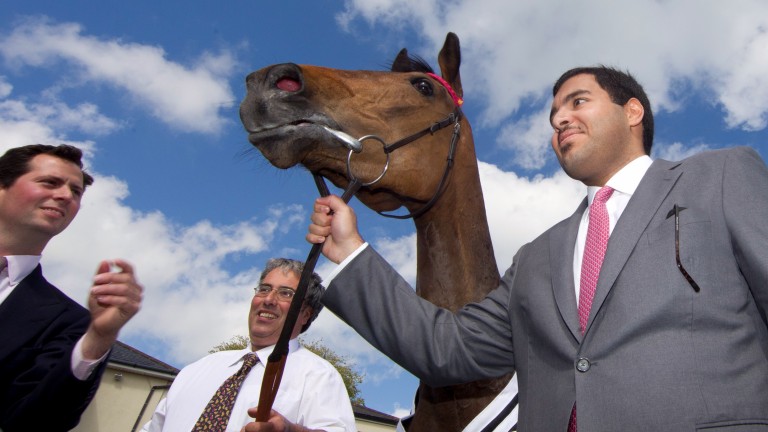 Qatar Racing is mourning the loss of Irish 1,000 Guineas heroine Just The Judge after the nine-year-old mare was put down following complications post colic surgery.

Charlie Hills, who acquired the daughter of Lawman as a yearling the same year he took out his licence, led tributes to the mare.

"It was my second season of training when she went unbeaten as a two-year-old," he said. "She was a tremendously gifted filly and won Group races at two, three and four, which takes a good bit of doing, and she was a great filly to have around.

"We bought her as a yearling and she was such a well-balanced filly with good size and scope and a tremendous action. She'll be hugely missed not just by me but all our family as well."

David Redvers, racing manager for Qatar Racing and owner of Tweenhills Stud Farm, said: "There's always an element of risk when you're dealing with livestock. We knew we were taking a particular risk with Just The Judge, but she's such an important broodmare to our operation.

"Her first two foals sold for over a million and her Galileo filly this year was born at the end of the first week in March. The cavity out of which the foal came leaves a fair space as you can imagine, a big place, and she flipped her colon, as in her large intestine, and this is a fairly common phenomenon and one that is normally easily rectified.

"The excellent team at Three Counties operated on her and it was all straight-forward and went extremely well. As you see from the footage taken of the mare and foal, she was in great fettle and we thought we were out of the woods and that everything was perfect.

"Two days ago, she was a bit grumbly in the paddock at lunchtime so we brought her in. She was obviously in a bit of discomfort so rather then calling the vet out or anything, we sent her straight to Three Counties Equine Clinic and I got a relatively pleasing message that evening to say it had all settled down, that it just looked like a bit of gas and was of no consequence.

"That night things suddenly took a turn for the worst and she was operated on immediately, and in spite of all of their best efforts and the great work put in by John Campbell and the team, she had to be put down today. I have just come back from saying goodbye to her."

Bred by Joan Keaney Dempsey, Just The Judge was out of the Rainbow Quest mare Faraday Light, a half-sister to the Oaks third High Heeled.

Just The Judge was snapped up for €50,000 as a Goffs Orby yearling by her trainer from Betaghstown Stud. She won all three starts as a two-year-old culminating in success in the Group 2 Rockfel Stakes at Newmarket, having been bought into by Qatar Racing to own her in partnership with the Sangster family.

Just The Judge ran second to Sky Lantern in the 1,000 Guineas on her seasonal re-appearance, and landed the Irish equivalent on her next outing when getting the better of Rehn's Nest.

An admirably consistent performer, she placed third a further four times at the highest level as well as recording a second elite win in the EP Taylor Stakes at Woodbine at four, when claiming the scalp of Odeliz.

She was hammered down for 4,500,000gns at the 2014 Tattersalls December Mares Sale, with China Horse Club taking over the share of the Sangster family.

Her first two foals, a two-year-old colt and yearling filly by Dubawi, fetched €1.4 million and €1m at Arqana last year.

"Anyway, now the process begins of fostering the gorgeous Galileo filly across and luckily it's a filly. And for China Horse Club and everybody that owns her, that'll be done as seamlessly as possible. She's a little toughie and I'm sure she'll work things out, but there have been better days."