Protonico retired to stand at Taylor Made

Alysheba Stakes winner raced until he was five 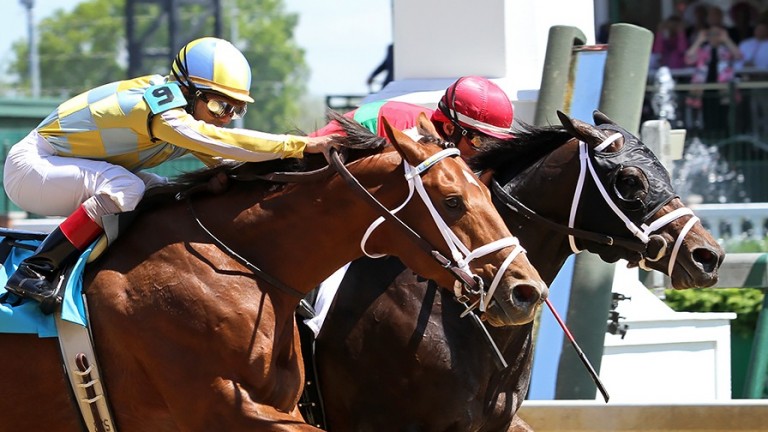 Sumaya US Stable's Protonico has been retired from racing and will stand at Taylor Made Stallions in Nicholasville, Kentucky in 2017.

"We are very excited to have Protonico join our expanding stallion roster for 2017," said Ben Taylor, vice president of Taylor Made Stallions.

"He was very unfortunate not to win a Grade 1. Besides being tremendous value for breeders, Oussama Aboughazale, the owner of Sumaya US Stables, is committed to supporting him heavily and wants to reward breeders who join him with the opportunity to earn a lifetime breeding right in Protonico."

The five-year-old won a maiden by almost 13 lengths at six furlongs as a two-year-old, and went on to capture the Grade 3 Smarty Jones Stakes at Parx Racecourse and Grade 3 Discovery Handicap at Aqueduct as a three-year-old.

Protonico completed his three-year-old campaign by finishing runner-up in the Grade 1 Clark Handicap against older horses at Churchill Downs, finishing half a length behind Hoppertunity and one and a quarter lengths ahead of multiple Grade 1 winner Constitution.

As a four-year-old, he led from start to finish when winning the Grade 3 Ben Ali Stakes at Keeneland by five lengths.

Protonico went on to score his biggest career win in his next start when beating Noble Bird and Honor Code in the Grade 2 Alysheba Stakes at Churchill Downs.

Pletcher added: "Protonico was a serious racehorse who showed Grade 1 talent at every stage of his career. He beat some top-level horses in several Graded races at major tracks like Churchill Downs, Keeneland and Aqueduct.

"I believe Protonico was very unlucky not to win a Grade 1, but he was one of the most versatile and better-looking horses we had in the barn."

Protonico is out of the A.P. Indy mare Alpha Spirit, and his second dam is three-time Grade 1/Grade 2 winner Wild Spirit, winner of the Grade 1 Ruffian Handicap at Saratoga.

The four-time Graded stakes-winning son of Giant's Causeway will stand at a fee of $6,500.

FIRST PUBLISHED 2:23PM, DEC 1 2016
We are very excited to have Protonico join our expanding stallion roster for 2017