Progeny of Europe's busiest sire in 2016 firing on all cylinders 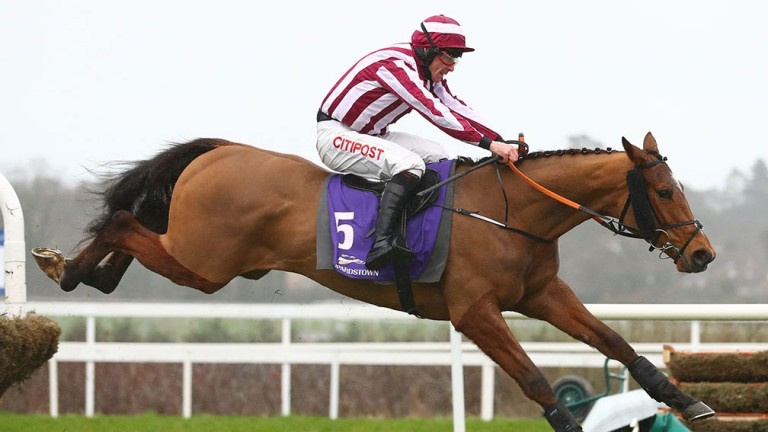 Mega Fortune who landed the Spring Juvenile Hurdle is a half-brother to Arakan
Patrick McCann (racingpost.com/photos)
1 of 1
By Martin Stevens 11:25AM, FEB 13 2017

Soldier Of Fortune went some way to justifying his status as Europe's busiest sire of 2016 with a Grade 1-winning hurdler and Listed chase scorer this weekend.

The 13-year-old formerly stood at Haras du Logis Saint-Germain in Normandy but was drafted into the Coolmore National Hunt roster last year and stands at Beeches Stud in County Waterford at a fee of €5,000.

He was warmly received by breeders in his first season in Ireland, during which he covered 304 mares.

So there will be many breeders relieved to have seen Soldier Of Fortune's son Mega Fortune land the Grade 1 Spring Juvenile Hurdle at Leopardstown on Sunday.

Mega Fortune, trained by Gordon Elliott for Chris Jones, beat the Turtle Bowl gelding Bapaume into second by three and a half lengths, with the Saddler Maker filly Dinaria Des Obeaux seven lengths back in third.

Mega Fortune has a fine pedigree, as he was bred by the Niarchos family out of the unraced Common Grounds mare Far Across, a half-sister to Poule d'Essai des Poulains third Petit Poucet and Group 3 scorer Donkey Engine.

Far Across is the dam of dual Group 3 winner and Ballyhane Stud stallion Arakan – sire of Group 1 winners Dick Turpin and Toormore – and has also produced 1m2f winner Spirit Or Soul to Soldier Of Fortune.

Mega Fortune was originally bought for just €19,000 from the Goffs Orby Yearling Sale by Andy Oliver, who trained him to win a Sligo handicap on the Flat.

Slowmotion, trained by Joseph O'Brien for JP McManus, was bred in France by Adrian Von Gunten out of the Medaaly mare Second Emotion, a winner over hurdles and fences and a half-sister to smart jumper Helium.

Also on Saturday's card at Naas, the Soldier Of Fortune gelding Icario – trained by Gordon Elliott for Gigginstown House Stud – finished second in a maiden hurdle.

In a good spell for the sire, one son, Tin Soldier, has scored in a Fairyhouse maiden hurdle for Willie Mullins, and another, the Charlie Mann-trained Like The Sound, was a close second in a Kempton novice hurdle.

Soldier Of Fortune, a son of Galileo bred by Jim Bolger, won the Irish Derby and Coronation Cup for Aidan O'Brien.

He is out of a half-sister to Sholokhov, the sire of last year's Cheltenham Gold Cup hero Don Cossack.

FIRST PUBLISHED 5:23PM, FEB 12 2017
Soldier Of Fortune was the most active sire in Britain and Ireland last year having covered a book of 304 mares