James Thomas reports from day one at Park Paddocks 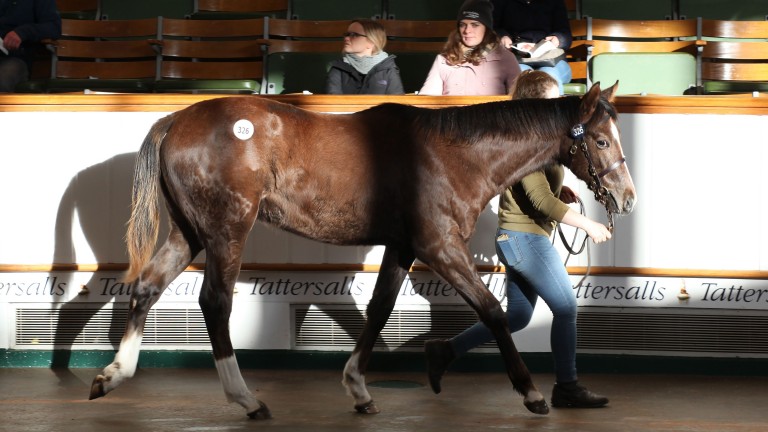 Thoroughbred speculators will have bigger targets to aim at later in the week, and it seemed as though plenty were content to keep their powder dry during a somewhat muted opening session to the Tattersalls December Foal Sale on Wednesday.

The progeny of first-crop sires provided the lion's share of interest, none more so than the El Kabeir colt offered by Ballyreddin and Kellsgrange Studs who was knocked down to prominent pinhooker Philipp Stauffenberg at the session-topping sum of 65,000gns.

The colt became the priciest member of the debut crop of El Kabeir, the son of Scat Daddy who covered a book of 151 mares at a fee of €8,000 at Yeomanstown Stud in 2018.

"I thought he was very well made, athletic, when you watched him going around the parade ring he really stood out, and for me he was the standout individual of the day," said Stauffenberg, whose purchase will be aimed at the 2020 yearling sales.

"He was the one I wanted most so I'm very happy to have got him. We've done well with horses we've bought on the first day before so hopefully we'll be lucky again."

The transaction also provided a fillip for Ballyreddin Stud's John Dwan, who said: "He's a homebred and from day one he's been a nice, good-walking foal. Ever since he got to the sales he's been showing very well, every show has been solid and consistent, and we hoped he'd be one of the nicer lots on day one."

The colt is the second foal of the winning Invincible Spirit mare School Run, who shares her page with the Group 1 winners Dream Ahead and Fairyland.

Dwan added: "He's the second progeny of the mare. Her first is a filly by Lope De Vega, she was a good walker too but probably an early type - this foal always had a bit of scope about him. The mare is in foal to Sioux Nation so we've stuck with the Scat Daddy line."

While progeny of first-crop sires were the order of the day for many, foals by a couple of more established names brought two of the session's bigger prices. Another pinhooker in action was Jamie Railton, who went to 65,000gns for the Night Of Thunder filly out of a half-sister to high-class sprinters Blaine and Bogart offered by Genesis Green Stud.

"I'm a big fan of the family with Blaine and Bogart, and their two-year-old half-brother called Byline is well rated too," said Railton. "She's a fine horse."

Night Of Thunder's popularity has skyrocketed with 27 winners, seven stakes scorers and earners of more than £890,000 among his debut two-year-olds. The filly was the sire's only representative on Wednesday, and helped push his foal average to 77,860gns for horses bred at just £15,000. 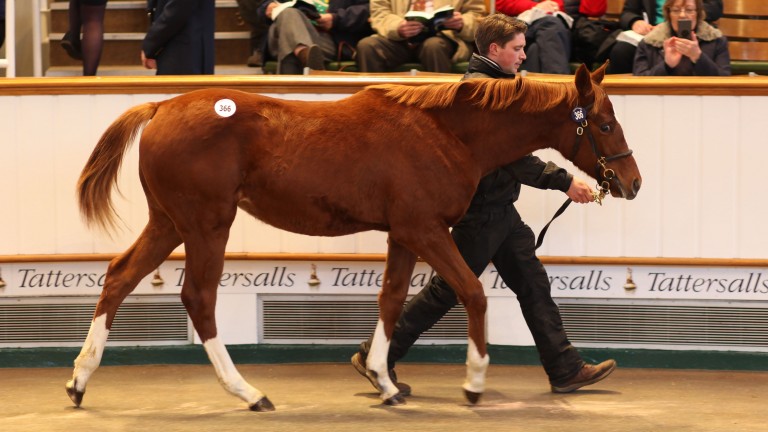 Lot 366: the Night of Thunder filly bought by Jamie Railton Sales Agency for 65,000gns
Laura Green
Another stallion with a solitary offering on day one was Kodiac, with the Castledillon Stud-consigned filly going the way of Hugo Merry at 62,000gns. The late-March foal boasted one of the session's stronger pages, as she is a half-sister to the Listed-winning Newsletter.

Merry said: "She's been bought to resell but we won't worry about it; if that doesn't work out we're happy to race her. I saw her yesterday and thought she was a lovely filly. She's a half-sister to a very good filly and it's a good back pedigree - the price is the same as Kodiac's stud fee too."

The 62,000gns mark was hit again later in the session when Good Will Bloodstock signed for a well-touted Territories colt from Cobhall Court Stud. The youngster is out of the winning New Approach mare Never Change, who was purchased with the Territories foal in utero by Howson and Houldsworth Bloodstock for just 11,000gns.

Purchaser Michael Fitzpatrick said: "He's lovely foal from a very good farm. I like what I have seen of the progeny of Territories."

The colt was offered by Cobhall Court on behalf of Ciaran Paterson, and the stud's Scarlett Knipe said: "Ciaran is our vet and was too busy to get here today - he knows the price though! We bought the mare carrying this colt and she was good value for money - she cost only 11,000gns at the July Sale last year. This is a lovely colt with a big walk."

Another first-crop sire to pique buyers' interest was Ardad, with Stuart Boman of Blandford Bloodstock proving most determined to land the filly out of Lastuce having struck a winning bid of 52,000gns for the Overbury Stud-consigned youngster.

Bred by Jocelyn Targett, the filly is the third foal out of the Listed-placed daughter of Orpen, who the breeder picked up for just 16,000gns in February 2015.

"She was an obvious one to bring here," Targett said of the filly. "She's by a first-season sire, which is what people want to see at these sales. She's exactly what you'd want to see from a horse in Ardad, who was such a sharp two-year-old himself.

"She has a great hip, a great shoulder and great attitude. Simon [Sweeting, Overbury Stud] always does a good job prepping foals and his team have done a wonderful job again."

Lastuce won seven races in France before she was switched to Chris Wall, who saddled her to finish third in the Kilvington Fillies' Stakes at Nottingham. The mare has a two-year-old filly by New Approach and visited Cityscape earlier this year.

"I bought Lastuce here," continued Targett. "She had been very good in France, where she had won seven races for Jean-Cloude Rouget - she actually beat a subsequent Grade 1 winner in Alterite first time out at Tarbes.

"But she hadn't won any black-type so I put her in training with Chris Wall and she ran third in the Kilvington. I also have her two-year-old New Approach filly, Didot, with Jerome Reynier."

Ardad, the Flying Childers Stakes-winning son of Kodiac, covered 132 mares in his debut season on duty at Overbury Stud at a fee of £6,500.

National Stud new boys up to the Test

The National Stud saw two of its resident sires, Aclaim and Time Test, represented by their debut crop of foals at Tattersalls, and both received a warm reception. Time Test's offerings were topped by one of his sons, who went the way of Howson and Houldsworth, acting on behalf of Horse Kingdom, at 48,000gns.

Offered by Tibthorpe Stud, the colt is out of the Cockney Rebel mare Rockme Cockney and from the further family of Breeders' Cup Turf Sprint heroine Belvoir Bay.

Tim Lane, director of the National Stud, was among those watching on as the colt changed hands. "He's stamping them," he said of Time Test's progeny. "The people who bred to him seem happy and we're hearing good things. There are some very nice foals here by him - they're good-looking with good actions."

Earlier in the session the Aclaim colt out of Movementneverlies caught the attention of the eagle-eyed Ciaran 'Flash' Conroy of Glenvale Stud, who went to 40,000gns for the Maywood Stud-consigned offering.

"He's a well balanced, good-moving horse," said Conroy, who indicated his purchase was made with resale in mind. "Aclaim was a very good horse - he looked very good when he won the Prix de la Foret - and he's a very good-looking individual too so you'd have to give him a big chance."

The colt is the third foal out of a dual-winning daughter of Frabjous, a Pivotal half-sister to Prix Maurice de Gheest scorer May Ball.

The Tattersalls December Foal Sale continues on Thursday at 10am, with trade expected to step up a level.

FIRST PUBLISHED 8:12PM, NOV 27 2019
She's been bought to resell but we won't worry about it; if that doesn't work out we're happy to race her