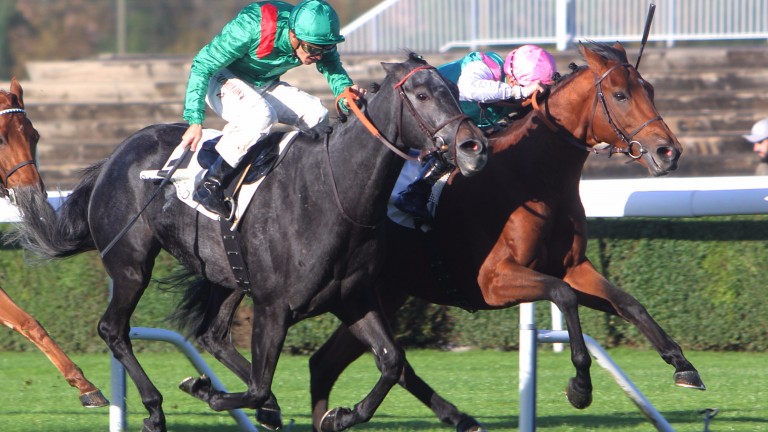 Shadwell's Nunnery Stud stalwart Nayef sired his third top-level winner when the three-year-old Ice Breeze saw off the attentions of the high-class Vazirabad to land the Group 1 Prix Royal-Oak at Saint-Cloud on Sunday.

The colt, who has proved something of a revelation since stepping up to staying trips, had already claimed the Prix Hocquart and Prix Chaudenay, both Group 2s, this season, and showed copper-bottomed levels of stamina to see off the triple Group 1 winner Vazirabad, who was bidding for a hat-trick of wins the in the Royal-Oak.

The colt joins Prix Jean Prat and Prix Jacques le Marois winner Tamayuz and Prix de l'Opera heroine Lady Marian as a Group 1 winner to be supplied by Nayef, a 19-year-old son of Gulch who stood his 14th season at stud at a fee of £5,000.

Bred by Juddmonte Farms, Ice Breeze is out of the Listed-placed Winter Silence, whose three other winning offspring include Yorkshire Cup and Hardwicke Stakes scorer Snow Sky, who is also by Nayef.

Winter Silence is a half-sister to the Dubai Sheema Classic winner Polish Summer and Grade 1 Manhattan Handicap scorer Meteor Storm among a host of stakes-winning siblings.

Ice Breeze becomes the third member of this family to land the Prix Royal-Oak, after the brothers Raintrap and Sunshack, who are by Rainbow Quest and appear beneath Ice Breeze's third dam - Suntrap, who landed the Group 1 prize in 1993 and 1995 respectively.

Winter Silence has three unraced progeny on the ground; a two-year-old Iffraaj colt named Air Frost, a yearling filly by Kingman and a colt foal by Nayef.