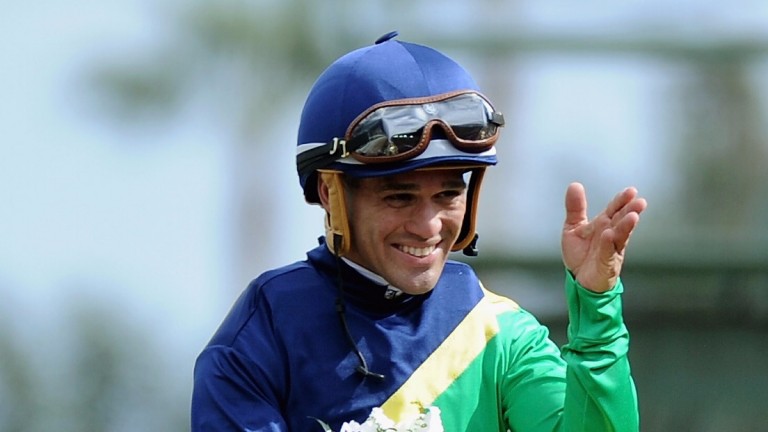 Javier Castellano: has got off Gunnevera to ride Cloud Computing in the Preakness
Harry How
1 of 1
By Chris McGrath 2:38PM, MAY 17 2017

You can’t have it both ways, I suppose. You can’t complain, that is, about adolescent stallions being packed off to cover mares by the hundred without even having the decency to race at three - and then, at the same time, profess to find something romantic about the possibility that a horse confined to a solitary career start might gain redemption at stud. But that is the situation in which I find myself with Maclean’s Music, who has the chance of making his big breakthrough when Cloud Computing lines up against Always Dreaming in the Preakness Stakes on Saturday.

For there is something really rather poignant about reviewing the one and only start made by the swaggering son of Distorted Humor, as a three-year-old in a maiden over six furlongs at Santa Anita in March 2011. It’s not just the gusto with which he rolled through eye-watering fractions of 21.24, 43.48, 55.05 and 1.07.44 - winning by over seven lengths, under a hand ride. It’s also the way Mike Smith hugged and caressed his neck after galloping out, clearly sensing that he had just uncovered an exceptional prospect; and the way the colt’s tongue was lolling perkily out of his mouth as he cantered back to the winner’s circle.

Among those blown away by what they had just seen were Andrew Beyer, who anointed Maclean’s Music with a speedfigure of 114, apparently the highest ever awarded to a debutant; and John G Sikura of Hill 'n' Dale Farm, who said: "Not since seeing Candy Run run the mile in 1.31 flat in Argentina have I been so captivated by a racehorse."

Unhappily for everyone concerned - Smith and trainer Steve Asmussen and, above all, Barbara Banke and her team at Stonestreet Farm - that was that. Stonestreet had taken quite a punt on the colt, buying him back for $900,000 at Keeneland September in 2009, and it had looked like paying off. Instead Maclean’s Music had to be retired owing to complications arising from the removal of a fractured splint bone.

But Sikura kept the faith, taking Maclean’s Music onto his roster at Hill 'n' Dale. Banke promised some of her best mares, and her bloodstock adviser John Moynihan raved about the contagion of excitement the colt had ignited. "We knew he was something special, and he proved it," he said. "His physical presence alone would entice any mare owner to breed to him, but that coupled with his amazing speed and brilliance? It's the recipe for greatness."

Asmussen assented. "A freak, a different breed," he said. "They don't come this fast."

Not to be outdone, Sikura declared his belief that he could turn him Maclean’s Music into "the next Danzig." Introducing him at $6,500, he secured the young gun a first crop of 79 foals - the commercial package enhanced by the fact that his dam had also been blazingly fast.

Forest Music, to be fair, arguably owed much of her own reputation to a downpayment - in her case, the record-equalling two-furlong bullet she produced at the Fasig-Tipton Calder breeze-ups. But the daughter of Unbridled’s Song made good on that that with a Grade 2 success in the Honorable Miss Handicap at Saratoga in 2005. She also managed Grade 1 podiums in the Prioress and the Test, before retiring to produce a Grade 3 winner by Tiznow over 7f. As Forest Music is out of a Gone West mare, she doubled up Distorted Humor’s grandsire Mr Prospector in the pedigree of Maclean’s Music.

Hill 'n' Dale's investment in its new sire paid off when one of its homebred colts, out of an A.P. Indy mare named Quick Temper, brought $200,000 from Seth Klarman and Bill Lawrence as a yearling at Keeneland September.

Quick Temper is a multiple stakes-placed daughter of Grade 1 Apple Blossom winner Halo America, herself by the Relaunch sire Waquoit - an East Coast slop specialist who won the Jockey Club Gold Cup by 15 lengths. Halo America's previous foals include a Storm Cat colt, Marino Marini, who won his first start starts for Ballydoyle before finishing third at odds-on for the Norfolk. He was subsequently beaten half a length in Phoenix Stakes but his career rather fizzled out in the United States.

Quick Temper's colt was named Cloud Computing, and his emergence as a wiseguy fancy for the Preakness represents a fairly giddy rise. Chad Brown hoped that he was a Saratoga juvenile, but he was sidelined by an ankle chip and did not make his debut until February, when winning a 6f maiden at Aqueduct. Though he coped very well with a big early test, second in the Grade 2 Gotham, and then made up ground on a fast track for third in the Wood Memorial, Brown spared Cloud Computing the ordeal of the Kentucky Derby and kept him back as a fresh face for the Preakness.

The theory that the second leg of the Triple Crown comes too soon after Churchill is seldom borne out, the last winner to sit things out - not counting Rachel Alexandra, who had put in her own 20-length romp against fillies in Louisville - and jump in at Pimlico being Bernardini in 2006. Prior to that, you're looking at Red Bullet (2000) and Deputed Testamony (back in 1983).

But Brown is optimistic that his colt will benefit from the break. "He's a lightly raced horse, that's why we skipped the Derby," he says. "He had the points to get into the race, but ultimately we decided that it was just too soon to put him in a 20-horse field at a mile and a quarter. He was playing catch-up all spring and, for the purposes of the Kentucky Derby, we just ran out of time. I also think the six weeks between that race and the Preakness has worked very well for this horse. I see a horse who has put a lot of weight on. He’s fresh and coming into the race very well."

Brown saddled Practical Joke to finish fifth to Always Dreaming in the Run For The Roses in the same colours and duly has a handle on sophomore standards. Javier Castellano, moreover, has got off the Churchill seventh, Gunnevera, to ride Cloud Computing.

Whatever happens, Maclean's Music looks as though he could yet build something lasting on that seductive glimpse of his ability. Eighth in the freshmen's prize-money table, he was top by number of individual winners - 20, out of just 40 starters - and now he at least has an outside chance of matching Bodemeister, sire of Always Dreaming, with a Classic winner from his first crop.