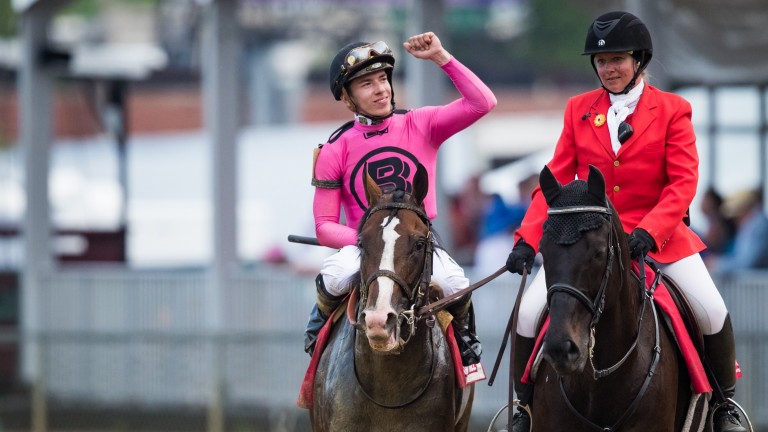 War Of Will: will join his sire War Front on the Claiborne roster
Wendy Wooley
1 of 1
By Bloodhorse Staff 2:31PM, AUG 8 2020

Claiborne Farm has purchased an interest in War Of Will, a dual surface Grade 1 winner and US Classic hero.

The son of Claiborne's emerging sire of sires War Front scored his most recent victory in this month's Maker's Mark Mile Stakes at Keeneland, going a mile on the grass.

War Of Will will stand at the Kentucky farm upon his retirement from racing, Claiborne confirmed.

"War of Will has an outstanding pedigree, and combined with his race record, he should be very appealing to breeders,"  said Claiborne's Walker Hancock.

"He's a Classic winner on dirt at three and a Grade 1 winner on turf at four, which places him in rare company.

"War Front is one of the most successful sires of his generation and there is no doubt he is becoming a sire of sires. We believe War Of Will has the capability to follow his father's success."

To date, four-year-old War Of Will has earnings of over $1,796,000 and four Graded stakes wins for trainer Mark Casse and owner Gary Barber.

"I'm very proud to be standing War Of Will at Claiborne alongside his famous father," said Gary Barber. "War Of Will has a special place in my heart having brought so much joy to me and my family. He's a once in a lifetime horse."

On just his second start, War Of Will was introduced to Grade 1 company, running a determined second in the Summer Stakes at Woodbine.

Coming off a maiden victory to end his two-year-old season, War Of Will kicked off his three-year-old campaign brilliantly, with decisive back-to-back Graded stakes victories going over a mile on dirt.

With Tyler Gaffalione in the irons, he easily bested subsequent Grade 1 winner Hog Creek Hustle and Group 2 winner Plus Que Parfait to take the Grade 3 Lecomte Stakes by open lengths.

One month later, eventual Kentucky Derby winner Country House and multiple Graded stakes winners Owendale and Mr Money proved to be no match for War Of Will in the Risen Star Stakes.

Following a contentious running of the Kentucky Derby, War Of Will became trainer Mark Casse's first Classic winner with victory in the Preakness Stakes.

In this year's Maker's Mark Mile, War Of Will moved into the prestigious group of dual-surface top-flight winners. Going one mile on firm turf, the now four-year-old colt fended off Group 1 winner Without Parole and two-time Grade 1 winner Raging Bull.

"I've been fortunate enough in my career to be around a lot of good horses, but I have to put War Of Will right there at the top. He has a special place in my heart," said Casse.

"He's a class act. There's a reason we call him 'WOW.' It's not just because of his initials. Everything he does is a wow. The way he looks. The way he trains, and his pedigree. I'm excited to see him go to Claiborne and follow in his father's footsteps.

"Our plan is to point towards the Woodbine Mile next, and then hopefully the Breeders' Cup."

Bred in Kentucky by Flaxman Holdings, War of Will is out of the stakes-winning Sadler's Wells mare Visions Of Clarity, who is a half-sister to multiple Group 1 winner and Breeders' Cup Mile hero Spinning World.

War Of Will is one of War Front's 21 Grade 1 winners worldwide. A prominent international sire, War Front has 13 million-dollar earners and is emerging as a sire of sires.

FIRST PUBLISHED 7:08PM, JUL 30 2020
War Of Will has a special place in my heart having brought so much joy to me and my family. He's a once in a lifetime horse