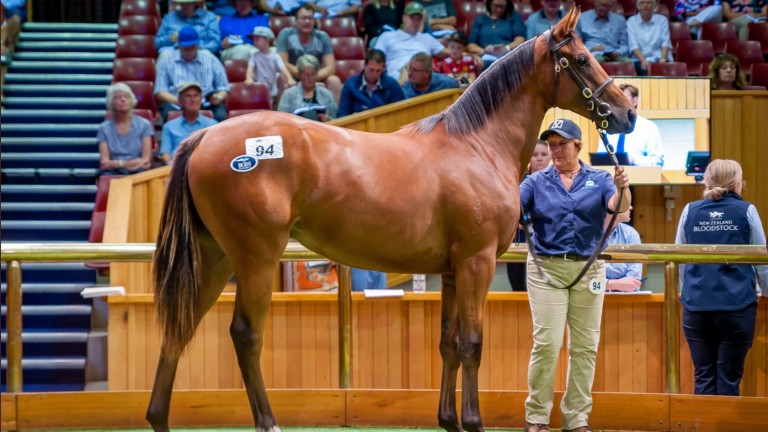 One of the world’s most influential thoroughbred industry figures has linked with Te Akau Racing, the seemingly unstoppable force of New Zealand racing, to purchase the most expensive yearling sold on day one of an historic New Zealand Bloodstock Karaka Yearling Sale.

Not since 1928, the year champion Phar Lap was sold, have international buyers been unable to attend the Kiwis’ premier yearling sale but yesterday David Ellis, himself a local industry giant, made sure there was an overseas flavour with the buying of an $800,000 (£421,000/€473,000) filly by Zoustar.

She was the most expensive of Ellis’ acquisitions yesterday, which also included a $625,000 Written Tycoon colt, the second highest-priced lot sold at Karaka on the first of three Book 1 sessions in which 24 yearlings made $200,000 or more.

"John Magnier, who owns Coolmore Stud, said that he wanted to support Karaka this year and he wanted to take a share in my best filly," said Ellis after signing for the filly who has a distinct dual-hemisphere pedigree.

"He has got a good-sized share in the Zoustar filly with Te Akau as we thought that she was the best horse in the sale."

David Ellis purchased @PencarrowStud’s Zoutar filly out of Scintillula (Lot 94) for $800,000. With the likes of #MelodyBelle, #Avantage and #Probabeel all flying the flag for the tangerine team, there is no doubt this quality filly will fit right in with her stablemates. pic.twitter.com/sHKzj4rRyE

At last week’s Magic Millions Gold Coast Yearling Sale, Ellis spent heavily on six yearlings in conjunction with agent Andrew Williams, including two fillies and a colt by Coolmore’s champion sire Fastnet Rock, two of which were consigned by Coolmore.

"I think the Magnier family have been very impressed with the job we have done with Avantage, who has won more Group 1s than any other Fastnet Rock,” said Ellis, who revealed another major international investor had committed to buying into the Zoustar filly.

"We are pretty proud to have one of Te Akau’s best clients, from Hong Kong, taking a 50 per cent share in the filly. There is only a quarter left and that will sell very quickly."

Bred by Pencarrow Stud’s Sir Peter Vela, the filly is the third foal out of Scintillula (Galileo), a Group 3 winner and Group 1-placed filly in Europe. She is also a half-sister to the talented Mike Moroney-trained four-time winner Birdsong and last week’s Pakenham winner Butter Chicken, a three-year-old filly trained by Grahame Begg for Jonathan Munz.  An American buyer, bidding online, was the underbidder on the filly.

"She is a top-class filly in every way," he said.

"We had lots of interest from many good judges, including many New Zealanders as underbidders. She is a lovely type. You can see the Zoustar quality as well as the Galileo strength. Plenty of quality and depth.

"Sir Peter is prepared to offer the best we have. He doesn't hold anything back because he has confidence in the market. What he does is for the good of the industry and not just for Pencarrow."

Seabrook satisfied with day one market

NZB managing director Andrew Seabrook was satisfied with how the opening session panned out given the uncertainty over what is predominantly an export market for New Zealand.

Both measures were down on the corresponding session year-on-year, but that was not unexpected, and the next two days’ of selling is predicted to be stronger with a number of higher profile horses to go through the ring.

“It was uncharted territory with no international buyers here due to Covid, of course, but it is a sense of relief (after day one),” Seabrook said.

“Earlier in the week, I said I’d be happy with anything up to ten per cent down on average and I think we’re down five per cent at the moment.”.

Importantly for the depth of trade at the NZB sale, 70 of the 180 yearlings offered yesterday were bid on over NZB’s online platform while 26 were purchased via online bidding.

“Forty per cent of horses were bid on (online) and 21 per cent were sold online, so that’s been vital to the success,” he said.

“The internationals are not just bidding online, they have also been able to contact their agents and the people representing them here to bid on the phone.

“I had trainers like Peter Moody ringing me today and various Australians, so it was very pleasing to see them being active.”

FIRST PUBLISHED 1:41PM, JAN 24 2021
We had lots of interest from many good judges, including many New Zealanders as underbidders