Positive reception to Zoustar could lead to him reverse shuttling 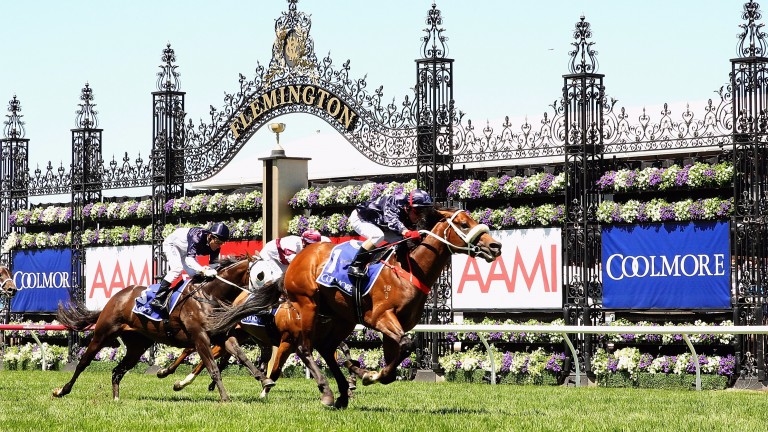 The market got its first look at the first yearling crop of Zoustar during the Magic Millions Gold Coast Sale curtain-raiser on Wednesday and the positive reception the sire received could be the first step on the road to him reverse shuttling to Britain in the near future.

Back in January 2014 it was announced that Sheikh Fahad Al Thani, the man behind Qatar Racing, had bought into the Chris Waller-trained son of Northern Meteor. He has now stood three years at stud, with alternate seasons at Widden Stud and Woodside Park, on a fee of A$44,000 (£26,724/€30,767).

“We’re always looking for potential stallions and the horse was on the radar before he ran in the Coolmore Stakes,” explained Sheikh Fahad’s racing manager David Redvers. The horse duly won that event with some authority to add a second Group 1 to his CV and help seal the deal for the powerful owner. “We were there and Sheikh Fahad was very taken by the performance. We started talking to Antony Thompson [Widden Stud owner] who was trying to buy the horse at the time and we agreed to invest.”

Zoustar is by Northern Meteor, a sire who had already impressed Redvers some years ago. The former Widden Stud resident had his legacy cut short having died aged just eight, but with the likes of Zoustar, Eurozone, Fighting Sun and Deep Field now representing him at stud he may yet etch his name into the annals of stallion history.

“I was very much a fan of his [Zoustar’s] sire when I first came out here,” he said. “We had his first yearlings and I was really taken by their outlook and their style.”

Not content with managing a stallion roster at Tweenhills which includes Charm Spirit, Harbour Watch, Hot Streak and Havana Gold, Redvers said the opportunity to expand into the southern hemisphere was an exciting proposition despite the highly competitive antipodean freshman sire market.

“I very much liked the idea of trying to find a young stallion prospect out here,” he said. “It’s a strong and resilient-looking market in Australia. They’ve got the prize-money levels and a diversity of owners, and from that point of view it looks a particularly healthy market. Though Australia almost seems more prone to fashion and as a result the hot first-season sire is definitely going to be very much in demand. The breeders who use a hot first-season sire will have a low risk and a high return.”

The Sheikh’s and Redvers’ involvement also opens up another avenue should Zoustar prove to be successful with his first runners, with the plan to reverse shuttle the six-year-old to Tweenhills very much in the pipeline. Though should Zoustar make the 10,300 mile journey, Redvers will be hoping that it proves more fruitful than the horse’s previous trip to the UK.

“It’s always been on the cards,” he says of the prospect of shuttling Zoustar. “When we first bought into him we brought him over to England to run at Royal Ascot but unfortunately he picked up a knock and we didn’t have time to get him there. It was very frustrating. We’d actually paraded him at the inaugural Goffs London Sale at Kensington Palace. The feedback we got there was hugely positive.”

“For British and Irish breeders those reverse shuttling stallions are pretty high risk unless there’s something they can really get to grips with. We decided that he’s such a valuable commodity in Australia that we’d leave him here to prove himself. We’ll definitely consider bringing him back to England as a proven stallion, for which there’s great demand.”

By the close of the first session Zoustar had had nine yearlings sell for a gross of A$2,030,000 and an average of A$225,556, which made him the leading freshman sire by aggregated represented at the session. The priciest of his yearlings were the pair that fetched A$400,000 with a filly out of Karalli offered by Rosemont Stud, who went to McDonald Racing, hitting that mark as well as a filly out of Mandawara from Glenlogan Park that went the way of Ciaron Maher.

“The main excitement for us at the moment is Zoustar’s first crop of yearlings,” Redvers concluded. “They look very good and there’s huge amounts of positivity behind him. He’s been tremendously supported and I think the fact that he stands alternate season between New South Wales and Victoria means that he’s been kept very busy.”

It may still be early days for Zoustar, but results from the first session of the Gold Coast Yearling Sale are sure to have piqued the interest of plenty of breeders.

FIRST PUBLISHED 6:00PM, JAN 11 2017
I very much liked the idea of trying to find a young stallion prospect out here,