Kingman filly out of Whirly Bird to be offered at Tattersalls 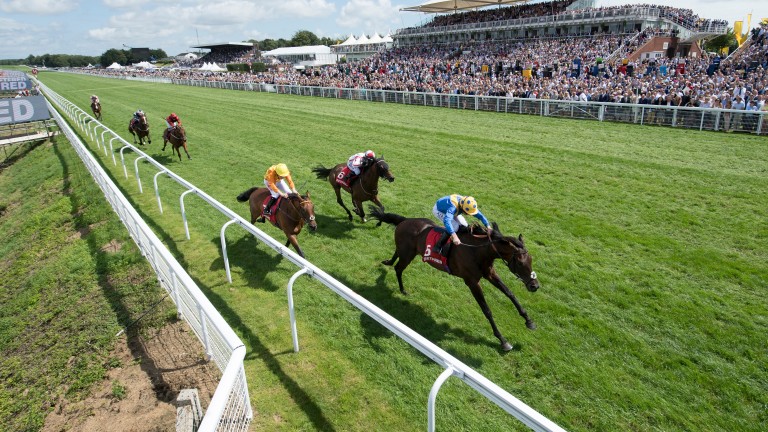 Poet's Word's breakthrough victory at stakes level in the Group 3 Glorious Stakes at Goodwood on Friday provided a boost not only to his sire but also to his Kingman half-sister who is destined for Book 1 of the Tattersalls October Yearling Sale this autumn.

The Sir Michael Stoute-trained colt entered a duel with Second Step two furlongs from home and had to use every inch of his reserves to land the contest by one and a half lengths. Bred by Woodcote Stud out of the winning and Listed-placed Nashwan mare Whirly Bird, Poet's Word was offered at Book 2 of the Tattersalls October Yearling Sale in 2014 where he was bought by Charlie Gordon-Watson for 300,000gns.

The Poet's Voice colt is the most expensive offspring out of Whirly Bird to have gone through the ring to date but with a filly by exceptional miler Kingman now set for the Newmarket sales house, there is sure to be plenty of interest in her.

For Barry Reilly of Woodcote Stud, who has also bred St Leger hero Kingston Hill, he was delighted with the result and said: "We bred and raced Whirly Bird. She had lots and lots of stamina and was placed over 1m6f and could have stayed two miles.

"300,000gns for a Poet's Voice from his first crop was great and that was a return on the £12,000 fee. At the time, Malabar had just won a Group 3 which was a great update to have going into the sale for a first-season sire.

"I didn't think the ground would have suited Poet's Word on Friday. You could say he was very workmanlike, as when he won his maiden at Nottingham it was fast ground that day. I think he's a better horse on better ground."

The family of Poet's Word has been extremely active in recent years and Goodwood has proved the scene of two Group 3 victories for his Raven's Pass half-sister Malabar.

Their third dam is the Group/Grade 1-placed Lomond mare Inchmurrin and within this strand of the pedigree you can find 2016 St Leger hero Harbour Law, Group 2 winner Hatta Fort and the Group 3 winning pair of Blue Bayou and Agent Murphy.

Of the Kingman filly destined for Newmarket later this year, Reilly is full of pride as he talks about her and added: "She's an outstanding individual. She's not a big filly but she looks all speed and has lots and lots of quality. She's very businesslike and I think the market will like the Kingmans."

FIRST PUBLISHED 7:42PM, AUG 4 2017
She's not a big filly but she looks all speed and has lots and lots of quality