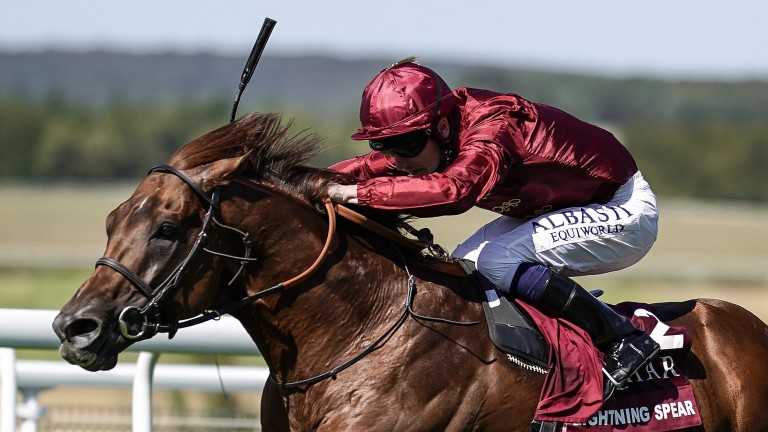 Few horses in training have deserved a Group 1 success more than Lightning Spear and he duly claimed what he was so entitled to by thrusting to victory in the Sussex Stakes at Glorious Goodwood on Wednesday, on his 16th start in top-flight company.

The David Simcock-trained seven-year-old entire had come agonisingly close to doing so before, not least when a short-head second to Rhododendron in the Lockinge Stakes and a close third behind Accidental Agent in the Queen Anne Stakes this season. He also has to his name placed efforts in the Queen Anne Stakes and Queen Elizabeth II Stakes at five and in the Lockinge at six.

Back at Goodwood, a course he excels at having finished third to Here Comes When in the Sussex Stakes last year and winning the last two renewals of the Celebration Mile, he was always travelling sweetly in midfield under Oisin Murphy in a slowly run race.

View the full result and watch the race replay

When the contest developed into a sprint in the closing stages, he found trouble in running at first but squeezed through a gap and drew clear to win by one and a half lengths from Expert Eye (by Acclamation) with Lord Glitters (Whipper) in third.

He becomes the 28th individual Group/Grade 1 winner by Cheveley Park Stud's phenomenal sire Pivotal, who stood his 22nd consecutive season at the Newmarket operation this year, at a fee of £40,000.

A Nunthorpe Stakes winner in his own racing career who started life as a stallion priced at just £6,000, Pivotal is assembling a monumental legacy to the thoroughbred breed.

His roll-call of Group 1 winners includes the capable sires Farhh, Kyllachy and most notably Siyouni, one of the most commercially popular young names in Europe.

He also sits atop the European broodmare sire rankings for 2018, with his daughters having produced the likes of Advertise, Cracksman, Mabs Cross, Olmedo, Rhododendron and Veracious.

David Redvers, representing owner Qatar Racing, confirmed after the race that Lightning Spear would join the operation's roster of stallions at his Tweenhills Stud in Gloucestershire.

"He's one of the best-looking horses in racing, he's won a stallion-making race and he's by Pivotal," he said.

Lightning Spear was bred by Newsells Park Stud out of the Royal Academy mare Atlantic Destiny who was, appropriately enough given her name, a Listed-winning sprinter on both sides of the Atlantic.

Atlantic Destiny was a half-sister to Group 2 Royal Whip Stakes winner Make No Mistake and to Highly Respected, the dam of Group 3-placed sprinter Invincible Force.

Her third dam was dual Grade 1 heroine What A Treat, who went on to produce Group 2 winner and champion sire Be My Guest.

David Redvers bought Lightning Spear on behalf of Qatar Racing for 260,000gns from Newsells Park's draft at Book 1 of the Tattersalls October Yearling Sale in 2012.

That price-tag would appear to confirm he has the looks to back up the pedigree and race record that make him an attractive stallion prospect.

What an eye-catcher Watan is for first-season sire Toronado

FIRST PUBLISHED 5:45PM, AUG 1 2018
He's one of the best-looking horses in racing, he's won a stallion-making race and he's by Pivotal

New champion Oisin Murphy defended by Sheikh Fahad over drunken altercation 'I'm over the moon' - Oisin Murphy crowned champion for third successive year High-flying Murphy almost home after double puts him three clear of rival Buick 'It fried my head' - jockeys might not enjoy a title battle, but we sure do 'I think he's very smart and definitely a Group 1 horse in the making next year' Godolphin the dominant force of 2021 - it may be just the start of a golden age