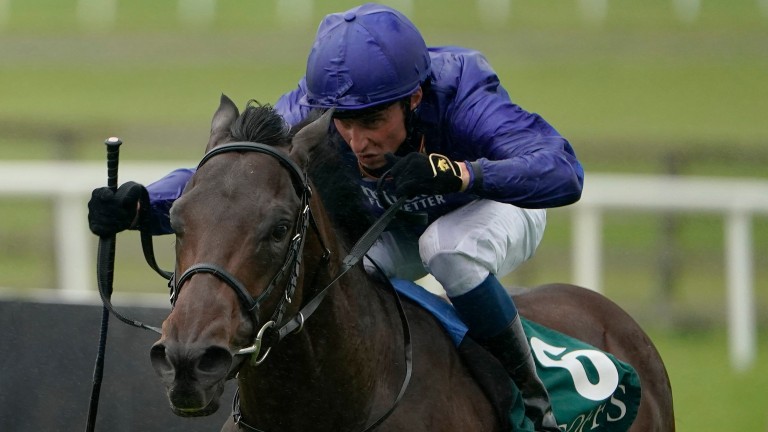 Pinatubo announced himself as one of the most exciting two-year-olds in years by taking his unbeaten record to five races with a nine-length demolition of talented rivals Armory and Arizona in the Goffs Vincent O'Brien National Stakes at the Curragh on Sunday.

Indeed, the Racing Post Ratings boffins decreed it was the best-ever performance by a juvenile in Ireland and they rank him better than Frankel at the same age.

But what does Pinatubo's pedigree say about his chances of carrying over his immense talent into his three-year-old season and his potential Classic targets?

Dealing with the Godolphin homebred colt's sire first, he becomes the 24th Group/Grade 1 winner for the operation's stalwart sire Shamardal – whose own racing career offers plenty of encouragement for his son's future.

Shamardal too was a top-class two-year-old, successful in the Vintage Stakes and Dewhurst Stakes, and he progressed at three to win the Poule d'Essai des Poulains, Prix du Jockey Club and St James's Palace Stakes, although he was retired after Royal Ascot after chipping a bone in his ankle.

It is hard to pin down the the sire's typical runner, as he has proved to be quite versatile.

He is by Giant's Causeway, a multiple Group 1 winner between a mile and ten furlongs at three, out of Helsinki, a daughter of Irish Oaks heroine Helen Street who scored over ten furlongs, which might have raised expectations of him specialising in milers and middle-distance performers.

Yet he is adept at getting sharp two-year-olds and sprinters – think recent Royal Ascot winner Blue Point and Prix Morny scorer Earthlight – as well as milers such as this season's Poule d'Essai des Pouliches victress Castle Lady and those who stay further like Baltic Baroness, Mukhadram and Speedy Boarding.

Unlike some other sires, Shamardal is certainly not associated with here today, gone tomorrow two-year-old talents and neither, generally speaking, is he known for supplying stayers. His progeny's average winning distance is 8.1 furlongs.

Indeed, returning to his own racing CV, he made all and just held on from the more stoutly bred and stronger finishing Hurricane Run in the Prix du Jockey Club in the first year it was shortened form 12 to ten and a half furlongs, so we might reasonably deduce that he inherited some speedier genes from his parents and often passes those on to his offspring.

If Shamardal is hard to pin down, there is plenty of stamina on the distaff side of Pinatubo's pedigree which gives hope for him stretching out beyond a mile at three.

He is out of Lava Flow, a Listed winner over 11 furlongs in France who is by middle-distance and staying influence Dalakhani. His half-sister Antisana is a 12 furlong winner across the Channel, albeit at a moderate level.

Lava Flow is a three-parts sister to Strobilus, a Group 1 runner-up over a mile at two, and a half-sister to Hunterview, who put up his best effort on the Flat over 12 furlongs and later became a useful hurdler for David Pipe.

The cross of Shamardal over a Dalakhani mare has previously come up with Global Giant, a Listed winner over ten and a half furlongs, although another bred along those lines, Taniyar, showed that the sire can sharpen a stouter pedigree as he won the Prix du Pin over seven furlongs and was fifth in the Prix de la Foret over the same distance at three.

In conclusion, then, Pinatubo's pedigree allows us to believe that – providing all goes well in his next intended run in the Dewhurst and he remains in good health – he should train on and improve further at three, and will have big races over a relatively broad range of distances within his compass.

It's the Galileo show as Irish Champions Weekend gets under way