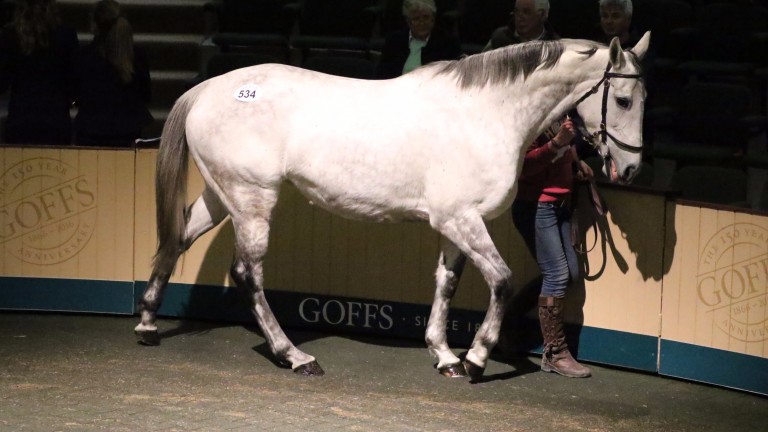 Petite Parisienne stole the show as the curtain came down on the year's trade at Goffs on Thursday when selling for €130,000 to Kieran Mariga during the final session of the Goffs December National Hunt Sale.

The dual Grade 1-winning hurdler, a striking grey mare, prompted a bidding war between Aidan O'Ryan and Mariga, as they dueled for one of the diamonds from Gigginstown House Stud's crown. Winner of the AES Champion Four Year Old Hurdle and the Gala Retail Spring Juvenile Hurdle at the highest level when trained by Willie Mullins, the five-year-old was sold in foal to Burgage Stud sire Shantou.

"She was the only horse we were interested in at this sale," said Mariga. "Cathal [my son] picked her out as the one to buy, she was a little bit pricey. We're getting out of cows and have been adding to our stock over the last four or five years. Hopefully this mare will be lucky for us."

The former dairy farmer from Youghal is in the process of switching from Friesians to Thoroughbreds and Petite Parisienne joins a select quartet of mares at the family's farm in East Cork. They include Line Mexia, a 14-year-old Indian River half-sister to the late, great Vautour. The Mariga family sold her Walk In The Park colt through Ballincurrig House Stud at the 2015 renewal of this sale and he was the most expensive lot, selling to Len Walker for €70,000.

"She's in foal to Walk In The Park again. We have a couple of mares in training and we're hoping that our Saint Des Saints filly, trained by Michael Winters, will make her debut over Christmas," Kieran added.

Walk In The Park cover catches the eye

Walk In The Park, a recent addition to the Coolmore National Hunt ranks, was the covering sire for the second most expensive mare of Thursday's session, Give It Time.

A multiple Listed-winning hurdler, the 13-year-old daughter of Kayf Tara has produced a winner in the shape of her first foal, Washed Ashore. The five-year-old has won twice over hurdles for Jonjo O'Neill and JP McManus.

Give It Time was bought for €75,000 by Aidan Archdeacon and John O'Dwyer, who bred Champion Hurdle winner Rock On Ruby.

"Kayf Tara is an excellent sire and Walk In The Park has got off to an excellent start at stud," Dwyer said. "Her filly foal by Robin Des Champs that sold on Wednesday was a gorgeous foal and we thought she would sell for a lot more. This is a lovely mare and she's already got a winner."

Petite Parisienne's stable companion Analifet was the horse who brought Califet to the attention of breeders outside France when winning the Grade 3 Bar One Racing Juvenile Novice Hurdle in 2013 for Gigginstown House Stud and Willie Mullins.

Injury prevented her from adding further victories to that initial triumph, but she was second in the Grade 1 Irish Stallion Farms EBF Mares' Champion Hurdle.

The gorgeous six-year-old received a timely boost to her pedigree as her half-brother Cause Toujours won the bumper at Warwick for Dan and Harry Skelton a couple of hours before Analifet took a turn in the ring.

O'Ryan, underbidder on the sale-topper, emerged victorious for this mare who he bought for €70,000.

"I'm acting on behalf of Tom Malone who is working for a West Country breeder, and I was bidding for them on Petite Parisienne," the agent explained. "She's a nice mare who showed a high class level of form on the track and Cause Toujours is a nice prospect who could do plenty for the family."

Earlier in the session Richard Frisby bought Thursday's priciest foal, going to €43,000 to secure a son of Mahler out of the Presenting mare Supreme Von Pres.

The colt is a half-brother to the Flemensfirth geldings Highland Lodge and Closing Ceremony, the former winner of the Grade 3 Betfred Becher Handicap Chase and the latter successful in the Grade 2 Betfred Rendlesham Hurdle.

Frisby said: "He's a lovely quality horse by a top sire and he will be offered for resale at the store sales."

Flemensfirth was the sire of the only other lot to breach the €40,000 mark on Thursday. Ciaran Conroy bought the foal from Yellowford Farm, a colt out of the unraced Milan mare Blue Maxi.

He is a three-parts sister to the talented Nigel Twiston Davis novice hurdler African Gold, from the family of Ottawa and Calling Brave.

The athletic bay colt is also related to Kylemore Lough, who won the Grade 1 Ryanair Gold Cup Novice Chase for Kerry Lee at Fairyhouse in March.

Flemensfirth was again the foal sire of the moment with three foals by the Beeches Stud stalwart making it into Thursday's top ten lots.

The most expensive filly foal to sell during the two days to was lot a daughter of Beat Hollow out of the Grade 3-winning chaser Shivermetimber.

Bloodstock agent Stephen Kemble went to €36,000 to secure the three-parts sister to black-type hurdlers The Pirate's Queen, The Dutchman and Katie Too, all by King's Theatre.

Kemble bought the bay filly on behalf of Mr and Mrs Christopher Harris, who owned both The Pirate's Queen and Katie Too.

"Katie Too recently died so Mr and Mrs Harris wanted to buy this filly," Kemble explained. "She will be kept to race and breed from eventually as The Pirate's Queen was sold a couple of years' ago."

FIRST PUBLISHED 9:15PM, DEC 8 2016
She was the only horse we were interested in at this sale