Dreaming Eyes was injured in a training accident on Tuesday 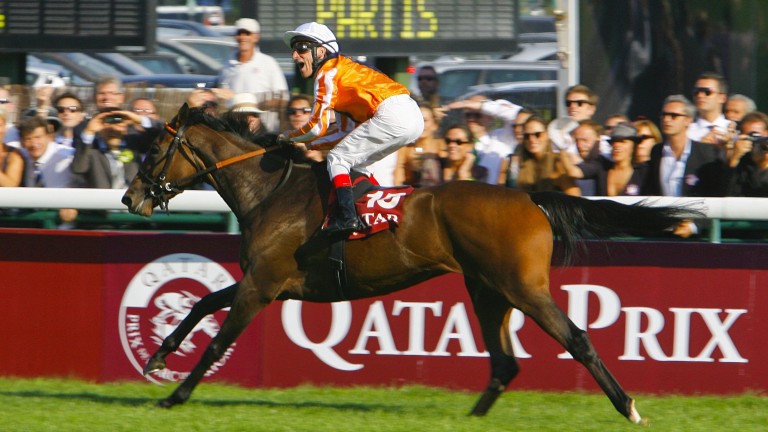 Peter Schiergen, the trainer of Arc and King George heroine Danedream, was left in shock on Tuesday when the mare's two-year-old Frankel filly Dreaming Eyes suffered a fatal injury during routine exercise.

In a blog post on his website, the trainer described how the filly had broken at full gallop without warning and collided with the rails, and despite a vet arriving within minutes, the regally bred filly could not be saved.

"Dreaming Eyes had two horses in front of her and one on her outside," wrote the trainer. "That a horse behaves this way is not normal, which is why our vet suspected a previous aortic tear.

"We do not want to make guesses or theories there, because all of this does not bring back our Dreamy. Every loss of a horse is bad and emotional, but losing a horse under such circumstances has never happened to us.

"Add to that, of course, the story behind the Frankel daughter. She is the first descendant of our exceptional mare Danedream who we trained. Danedream gave us the best moments with her victories.

"So many memories came up every day when you saw Dreaming Eyes galloping in the morning. But she was not supposed to follow in her mother's footsteps. We are in deep mourning and our thoughts are with the owners, our staff and all the people who followed Dreamy."

The loss provides yet another example of the highs and lows of racing, with Schiergen having saddled the Champs Elysees filly Durance to win the Group 3 Mehl Mulhens Trophy on Saturday during German Derby week.

Danedream was bred by Gestut Brummerhof and raced by Gestut Burg Eberstein and Teruya Yoshida, and has boarded at Newsells Park Stud since retiring to stud.

Faylaq, her 2016 colt by Dubawi, was acquired by Shadwell for 1,500,000gns at Book 1 of the Tattersalls October Sale, and has won his last two starts for William Haggas and is declared in Class 2 company at Ascot on Saturday.

Danedream also has a Frankel yearling filly and Dubawi colt foal, with Teruya Yoshida listed as the breeder of all her progeny to date.

FIRST PUBLISHED 1:24PM, JUL 11 2019
So many memories came up every day when you saw Dreaming Eyes galloping in the morning