Pedigree focus on the nine declared runners for the Dante Stakes 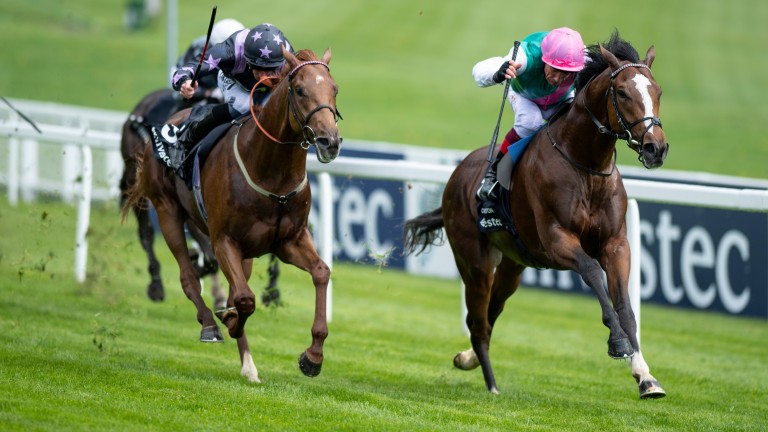 Second favourite Crossed Baton (right) could become the first son of Dansili to win this contest
Edward Whitaker
1 of 1
By Ollie O'Donoghue 5:42PM, MAY 17 2018

Second favourite Crossed Baton could become the first son of Dansili to win this contest, though the same sire has been responsible for four winners of the fillies' equivalent, the Musidora Stakes, in Passage Of Time (2007), Aviate (2010), The Fugue (2012) and last year's winner Shutter Speed.

Comes into this trial off the back of a win in the Blue Riband Trial at Epsom, the same race won last year by subsequent Derby third Cracksman.

Younger brother to Found, who led home a 1-2-3 for their sire, Galileo, in the 2016 Prix de l'Arc de Triomphe, the highlight of her racing career for which she earned a career-high Racing Post Rating (RPR) of 124.

Fourth to Crossed Baton in the Blue Riband, this smart colt could become the fourth Pattern winner out of dual Group 1-winning miler Red Evie, whose other stakes scorers are Magical Dream and Best In The World, both also by Galileo.

This son of Camelot - whose other sons Alounak and Naturally High both landed stakes races beyond a mile last month - is one of three possible representatives for sophomore sires in the race.

Merlin Magic is a three-parts brother to Snoqualmie Boy, who was a fair third to Septimus in the 2006 Dante. Another sibling by Montjeu, Snoqualmie Girl, was a dual Listed winner from a mile to 1m4f. They are out of Seattle Ribbon, a placed sister to Racing Post Trophy winner Seattle Rhyme.

Mildenberger is one of 75 stakes scorers for his sire Teofilo - who as well as Permian, supplied Arod and Trading Leather, both runners-up in the Dante in previous years.

The Charlie Appleby-trained Nordic Lights could establish himself as a third legitimate Derby contender for sophomore sire Intello.

Another of the sire's sons, Young Rascal, has recieved quotes as short as 10-1 for the Epsom Derby, while Intellogent won a key trial for the Prix du Jockey Club at Chantilly earlier this month.

Although his half-sister and dam both won Listed sprints, Nordic Lights shares his granddam with Prix d'Ispahan winner Best Of The Bests, suggesting he might see out the Dante trip.

Last year's Racing Post Trophy runner-up is out of Vionnet, who placed in elite company over 1m2f in the US.

Last year's Acomb Stakes winner is out of a Galileo mare in Mowazana and Wells Farhh Go's granddam, Taqreem, is a half-sister to Ibn Bey and Roseate Tern, both top-class middle-distance performers, suggesting the colt may improve over further in time.

Speed is also in evidence on the page as Taqreem is also the ancestress of Group 2-winning sprinter Rangali.

White Mocha's sire, Lope De Vega, won the French Derby over the Dante trip, while the colt himself is a half-brother to Group 3-winning miler Melesina, out of a winning half-sister to Little Italy and Romantic Affair, both stakes winners over 1m4f and upwards.

Also encouraging is the fact their dam is an unraced half-sister to Tattersalls Gold Cup winner Foscarini and the 1983 Dante runner-up Guns Of Navarone.

What an achievement it would be if Frankel could sire the winner of the Derby from his second crop, having supplied the third and fourth in last year's race in Cracksman and Eminent.

Maiden winner Zabriskie will have no excuses based on pedigree should he fail to fire in this key trial - his dam, the Nureyev mare Moonlight's Box, has produced four runners with an RPR of 100 or greater including Arc hero Bago and dual Group 1 winner Maxios.

Teppal toughs it out in French 1,000 Guineas to give Camacho a first Group 1

FIRST PUBLISHED 6:56PM, MAY 15 2018
Crossed Baton comes into this trial off the back of a win in the Blue Riband Trial at Epsom, the same race won last year by Cracksman