Trainer goes to £190,000 for sons of Getaway and Sholokhov 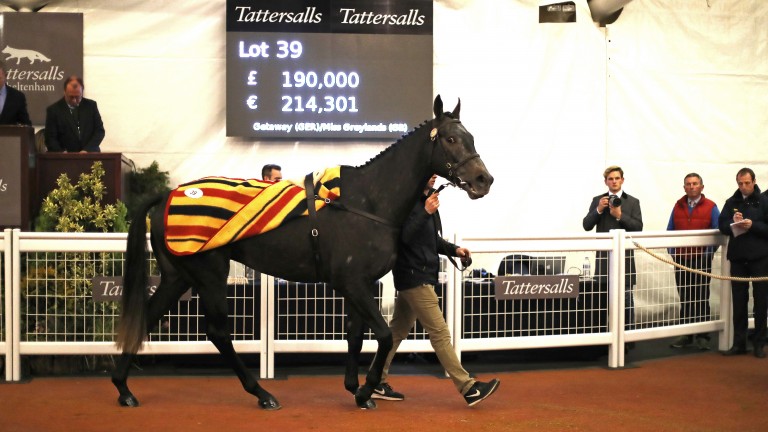 Ten-time champion trainer Paul Nicholls was busy adding to his Ditcheat string at the Tattersalls Ireland Cheltenham November Sale yesterday, featuring among the buyers of the two joint-highest priced lots on an evening when the great and good of National Hunt racing were out in force.

Grey Getaway, catalogued as lot 39 and consigned by Denis Murphy’s Ballyboy Stables, was the first of the £190,000 buys. The son of Getaway was offered fresh from finishing second in a Dromahane point-to-point only six days ago and hails from the family of See More Business, who helped propel Nicholls’ training career to new heights when landing the 1999 Cheltenham Gold Cup.

“He’s just a really nice type and is a nice horse to have for the yard,” Nicholls said. He’s a good size and from a great Gold Cup-winning family.

“He’s a four-year-old that wants plenty of time but he’s a nice chaser for the future."

Not content with one new high-priced recruit, Nicholls teamed up with Tom Malone to secure another £190,000 prospect after the pair came out on top in the bidding for lot 46, the Loughanmore Farms-consigned Muckamore.

A four-year-old by Sholokhov, he too finished second in a recent point outing and Malone said: "He's a lovely animal. He’s by Sholokhov, has got a lovely pedigree, he’s 17.1 hands and it was the first run of his life, coming from a camp that wouldn’t bully them to be ready first time out.

“He’s high class and you’re buying a big, strong, chasing type, so fingers crossed he goes on to do his job.”

The winners of the races contested by Grey Getaway and Muckamore also found buyers last night, with the former's conqueror Wherewouldugetit going the way of Andrew McNamara for £90,000 and Beyond Redemption, who defeated the latter, fetching £140,000 from Highflyer Bloodstock.

Highflyer was also in action earlier in the sale, striking the winning bid of £180,000 for Elusive Belle, a four-year-old daughter of Irish National Stud stallion Elusive Pimpernel.

Catalogued as lot 20, the filly was consigned by Peter Fahey’s Roefield Stables and will head to Lambourn into the care of reigning Champion Trainer Nicky Henderson.

Highflyer’s David Minton was already mapping out a plan for the filly, who descends from the family of the ill-fated European Champion Two-Year-Old Filly Chriselliam.

“She’s got the size, scope, pedigree and performance, and her run at Gowran was really impressive, where she stayed on well. She was beaten by a very good mare that day.”

In addition to the stalwarts of the National Hunt world there were plenty of new faces on hand to cast their eye over the talent on offer, with Tom Kelly making his first ever purchase to the tune of £130,000.

The horse in question was Lou Trek, a son of Linda’s Lad consigned by Michael Goff's Moate Stables, who described the gelding as “a very talented individual who could be anything”.

Kelly, who hails from Loughrea in County Galway, joked after landing his first racehorse: “It’s the first time I’ve been standing here and I better move otherwise I could be in trouble!"

He added: "There’s no plan really, we’ll get him home and take it from there. We’ll give him a break for a year or two to grow up and maybe Point-to-Point him.

“He’s a bit light. I might get a professional trainer to look at him as he’s definitely one for the future.”

Elsewhere, after a disappointing day on the track which saw him finish last on his only completed ride, there was a dramatic change of fortunes for Gold Cup-winning jockey Robbie Power who, after switching his attention to the sales ring, saw Picanha, the colt he bought as a store for €24,000, sell for £110,000.

Malone was once again the man responsible for the winning bid, with the gelding boasting relations to the likes of Badger Ales Trophy winner The Package.

Power said: “He’s a very nice horse, we’ve always though plenty of him and best of luck for whoever bought him with Tom Malone.

“We’ve made a nice bit of profit and we’re very happy. I bought another one this summer, a horse by Carlotomix. He’s only just broken so we’ll take it one step at a time."

Malone later revealed that the gelding was subsequently sold to Liz Prouting and Hannah Bishop, and will be sent into training with Richard Phillips.

A total of 12 horses realised six-figure sums, down from 14 the previous year, while the joint sale-topping price was half of that from 12 months ago, with Irish pointer Know The Score went to David Pipe for £380,000.

Despite the general fall in figures from last year’s record-breaking renewal, Tattersalls Ireland’s director of horses in training sales, Richard Pugh, was delighted with Friday's auction.

“That was one of the best November sales that has been staged at Cheltenham, with the third best turnover and a 91 per cent clearance rate, while 12 horses made a six-figure sum,” he said.

“The spread of horses and buyers was a very pleasing aspect.”

He added: "We now look forward to attracting more of the same calibre of horse focusing on the Cheltenham December Sale on Friday, December 14."

FIRST PUBLISHED 9:21PM, NOV 16 2018
He?s a four-year-old that wants plenty of time but he?s a nice chaser for the future