Over $375 million has changed hands across 12 days of trade 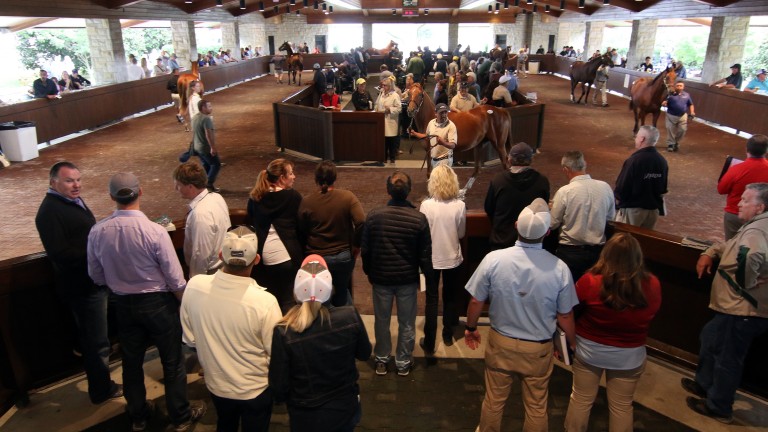 Florida horseman David McKathan has a system for buying horses late at an auction like the marathon Keeneland September Yearling Sale.

During the penultimate session on Saturday, McKathan was positioned inside the rear walking ring where horses are shown before entering the sale pavilion, with his eye on future racing prospects to purchase under the name of Grassroots Training and Sales.

Although the horses catalogued in the latter days of the sale "are inferior conformationally (compared to) in the earlier days, that doesn't mean they aren't good athletes," said McKathan, who looks at every horse being shown. For those that catch his attention, he contacts his veterinarian positioned in the Keeneland repository, who can review a yearling's radiographs to see if it is worth pursuing.

On a day in which there continued to be vibrant trade, Grassroots emerged as leading buyer with two purchased for $74,000.

Among the yearlings bought by Grassroots was a filly (Hip 4088) by Goldencents out of the winning Tapit mare Bellezza Rosso. She was purchased from Four Star Sales, agent, for $65,000, co-highest price of the day.

The second $65,000 yearling was a colt (4107) from the first crop of Danza purchased by Ken and Sarah Ramsey. Scott Mallory, agent for Spendthrift Farm, consigned the colt, who is from the family of Grade 2 winners Rockport Harbor and Regally Appealing.

Another domestic buyer competing with a broad cross-section - including many pinhookers and foreign buyers - during the Saturday session was Conor Foley of Oracle Bloodstock.

Foley said he purchased yearlings on behalf of clients throughout the early sale sessions and that he had one more order to fill, which he hoped to complete Saturday.

He, too, was not deterred by the perception of horses cataloged late in the sale.

"The horses don't know what they cost," he said. "A very good horse can still come out of this session today. You can still find an excellent athlete here. It's our perception on paper that they belong here this late."

Foley said filling orders in such a strong market is frustrating for buyers, but is also a good sign.

"I'm happy for the sellers and it means the industry is strong."

The sale concludes on Sunday with a session that begins at 10 am EST (3pm GMT).

FIRST PUBLISHED 12:14PM, SEP 23 2018
A very good horse can still come out of this session today. You can still find an excellent athlete here