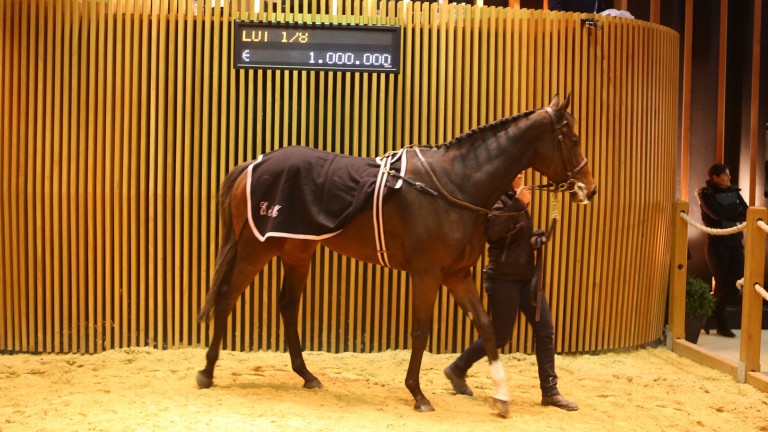 German Group 2 winner Parvaneh topped a strong first session of the Arqana December Breeding Stock Sale on Saturday after James Delahooke went up to €1 million to secure her on behalf of Pursuit of Success LLC.

Parvaneh was offered by Ecurie des Monceaux as a filly in training from Waldemar Hickst and Delahooke saw off Gordian Troeller bidding for DP Racing to secure the three-year-old daughter of Holy Roman Emperor.

"She's been bought on behalf of an American partnership, and will now be retired" Delahooke said. "We tried to buy at Tattersalls last week, but didn't manage to get anything. This filly really fitted the bill, and was in the right price bracket."

Unplaced in the Grade 1 EP Taylor Stakes on her last start, Parvaneh had won a Group 3 on her seasonal comeback and also finished fourth in the Group 1 Preis von Europa this year. Out of the winning Kahyasi mare College Fund Girl, she is a sister to Group 3-placed Mehdi from the family of Nayyir and Sky Hunter.

The daughter of Myboycharlie was knocked down to Emmanuel de Seroux of Narvick International and Troeller was once again underbidder.

"She's the whole package," the agent said of the daughter of the Group 3-winning Sadler's Wells mare Camporese from the family of Hasili. "We'll have to see, but I would have thought she will now visit Deep Impact next year."

Consigned by Anna Drion's Coulonces Consignment and bred by her 15-year-old daughter Moa, who had sold her as a yearling for €30,000, Camprock made her debut in January this year, winning her first three races including at Listed and Group 3 level.

Her next outing, described by trainer Pia Brandt as the most heart-wrenching of her career, saw Camprock go down by a head in the Saint-Alary before the filly picked up an injury in the Prix de Diane, her final start.

Talvard takes home a pricey one

After a highly successful year, an emotional Pierre Talvard of Haras du Cadran purchased his most expensive mare to date when close friend Carlos Lerner signed the docket for Reponds Moi at €750,000.

Offered from the Wertheimer brothers' draught in foal to Intello, the six-year-old mare is from one of their most well-known families. Bought in partnership with Jean Cottin, the purchase followed on from buying Avenue Gabriel for 375,000gns at Tattersalls.

"I loved her from the moment I first saw her," said Talvard, who bred this year's Coronation Stakes winner Qemah. "She has a fantastic pedigree and will be a great addition to our broodmare band. The idea is to sell her progeny back here as yearlings."

A sister to Listed winner Sonnerie, Reponds Moi is out of Group 1 Cheveley Park Stakes winner and Prix de l'Abbaye runner-up Pas de Reponse from the family of Green Tune.

The page recently received an update through her daughter Saying's colt Dicton, who finished third in the Prix du Jockey Club and Poule d'Essai des Poulains this year.

It was Hugo Merry who had the final say for the only Frankel foal to be offered at public auction in France to date, with the filly being knocked down to him for €450,000 on behalf of Andrew Rosen.

Consigned by Haras des Capucines for her breeders Eric Puerari, Oceanic Bloodstock, Haras de Saint-Pair and OTI Management, the April-born chestnut filly is a half-sister to Group 2 winner Family One, who also finished runner-up in the Prix Morny.

"She's a lovely fluid mover with a great disposition," Merry said. "Andrew Rosen breeds in Kentucky and has his mares at Claiborne, so hopefully if she makes the grade on the racecourse then she can retire there. She'll stay in France for the moment for the premiums."

With 24 fewer lots going under the hammer than last year, the figures from the first day's trading showed increases all around with the exception of the aggregate of €14,518,000, down just over five per cent from last year.

The 11 mares and fillies sold by the Wertheimer Brothers made them the day's leading vendors for a total of €2,197,000.

FIRST PUBLISHED 8:34PM, DEC 3 2016
This filly really fitted the bill, and was in the right price bracke