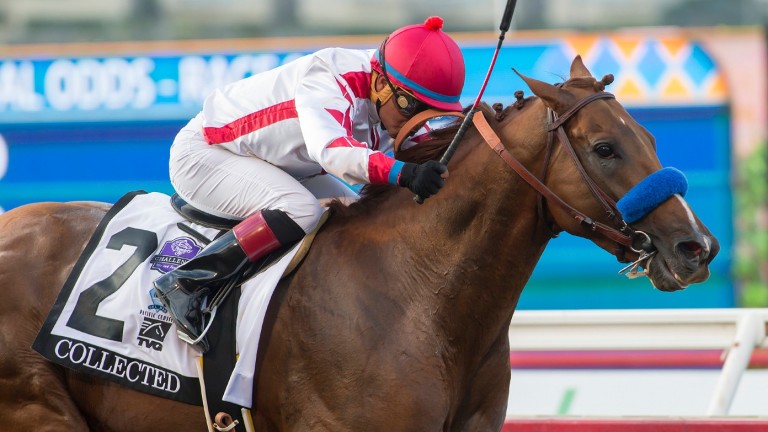 Grade 1 winner Collected will begin his stud career at Airdrie Stud for the 2019 breeding season.

Bred in Kentucky by Runnymede Farm and Peter J Callahan and campaigned in the silks of Speedway Stable, the Bob Baffert trainee was an Eclipse Award finalist for 2017 champion older male.

The season was highlighted by his victory over champion Arrogate in the $1 million TVG Pacific Classic and a runner-up finish in the Breeders' Cup Classic.

A five-time Graded stakes winner, Collected's current earnings stand at $2,975,500 as he awaits a possible start in the Breeders' Cup Classic at Churchill Downs as an also-eligible for the field of 14.

Purchased from SGV Thoroughbreds' consignment to the 2015 Ocala Breeders' Sales March Two-Year-Old in Training Sale by Marette Farrell for Speedway, the son of City Zip raced twice in his juvenile year, winning his debut over six and a half furlongs on the downhill turf course at Santa Anita Park before finishing a close second in the Grade 3 Cecil B Demille Stakes on turf at Del Mar.

A winner of three of his first four starts at three, including the one-mile Grade 3 Sham Stakes on the dirt and Keeneland's Lexington Stakes, also Grade 3, Collected turned in a disappointing tenth over a sloppy track in the 2016 Preakness Stakes and did not start again as a sophomore.

Collected's banner season came in 2017 during a campaign that saw him win his first four starts, while distinguishing himself as one of America's best horses in training.

Following wins in the Santana Mile Stakes and Californian Stakes at Santa Anita, Collected took his place among division leaders with a dominant 14-length score over a field that included eventual 2018 Breeders' Cup Classic favourite Accelerate in the Precisionist Stakes.

Sent off as the second choice behind American racing's all-time leading earner Arrogate in Del Mar's Pacific Classic, Collected bested his acclaimed stablemate by half a length at the wire with Accelerate another three and three-quarter lengths behind in third. In his next start, Collected battled with Horse of the Year Gun Runner in the Breeders' Cup Classic from the outset before finishing second, one and a quarter lengths clear of 2017 Eclipse champion West Coast.

A son of the late City Zip, who sired 77 black-type stakes winners and six champions, Collected is out of the Johannesburg mare Helena Bay and comes from the decorated Runnymede/Aga Khan family of leading sire Blushing Groom and 2017 Eclipse champion Lady Eli.

"It's a very proud day for Airdrie Stud to be able to announce Collected as our newest stallion," said Airdrie owner Brereton Jones.

"One of the smallest bullseyes to hit in our business is to find a young stallion that both fills the eye of the commercial breeder, while also boasting the resume of a genuine leading sire prospect.

"Collected is that horse. He's a beautiful, masculine, correct Marette Farrell purchase. He was a debut winner at two going six and a half furlongs and he trained on to beat the best horses in the world at the Classic mile and a quarter distance.

"He's the best son of one of the really special sires we've seen in recent years in City Zip and he comes from a family cultivated by two of the world's best breeders.

"We couldn't be more grateful to Peter Fluor and KC Weiner and their families for allowing us to stand their great horse or more excited about the exceptional partnership we've put together to support Collected at stud. This horse has a chance to be very, very special."

A stud fee will be announced immediately following Collected's official retirement from racing.