Our Conor relation among winning pointers added to Spring Sale 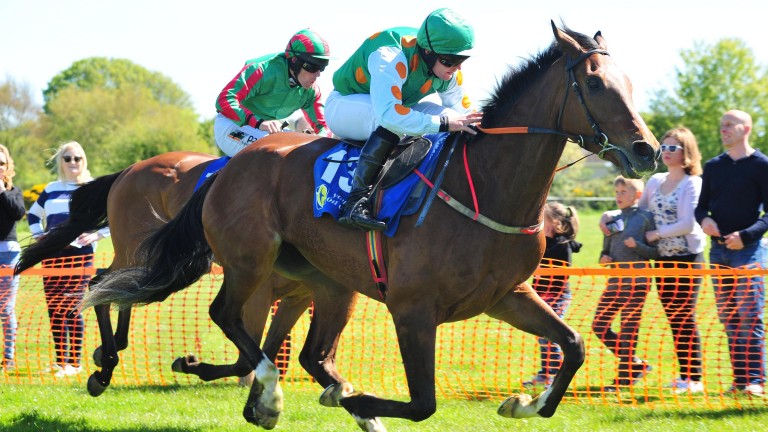 The first three home in both divisions of the Goffs UK Spring Sale four-year-old geldings maiden at Bartlemy on Sunday have been supplemented for this week's sale, including a relation to the ill-fated Triumph Hurdle winner Our Conor.

The first heat was won by the Mick Goff-trained debut winner Mustang Alpha (485), a son of Stowaway who is out of a half-sister to Noland, winner of the Supreme and Tolworth Novices' Hurdle for Paul Nicholls and owner John Hales.

The second contest was won by the Jeremy gelding Lets Go Champ (479), who is out of a half-sister to Jeremy's highest rated jumps runner in Our Conor.

Lets Go Champ became the 15th four-year-old winner for Donnchadh Doyle this season and is a full-brother to Scarlet And Dove, the impressive winner of a Limerick bumper on debut for Joseph O'Brien.

Close in second was the Colin Bowe-trained Full Back (484), a son of a Listed-placed hurdler in France who should also garner plenty of attention from buyers.

Other entries to catch the eye include the Presenting gelding Face The Odds (482), a five-length winner at Dawstown for Denis Murphy, and Fakir D'Alene (491), a 20-length winner at Broughshane for Donnchadh Doyle.

The Spring Sale runs from Tuesday to Thursday, with the dedicated point-to-point session taking place on Wednesday.

Costelloe makes a Getaway with €58,000 May Store Sale top lot

FIRST PUBLISHED 10:49AM, MAY 16 2019
The Spring Sale runs from Tuesday to Thursday, with the dedicated point-to-point session taking place on Wednesday

'She's ready to kick on' - winning Irish pointer Criquette heads to Alex Hales 'She ticked all the boxes' - £56,000 No Risk At All filly foal tops January Sale 'We've had calls from breeders finding it difficult' - ITBA start webinar series Shade Oak Stud's Logician making heads turn at Goffs UK Winter Million bumper star Our Jester and his fittingly unconventional pedigree On the roads of Normandy: Five nuggets from my weekend on the Route des Etalons