Ouija Board in return to sire of her promising son Frontiersman 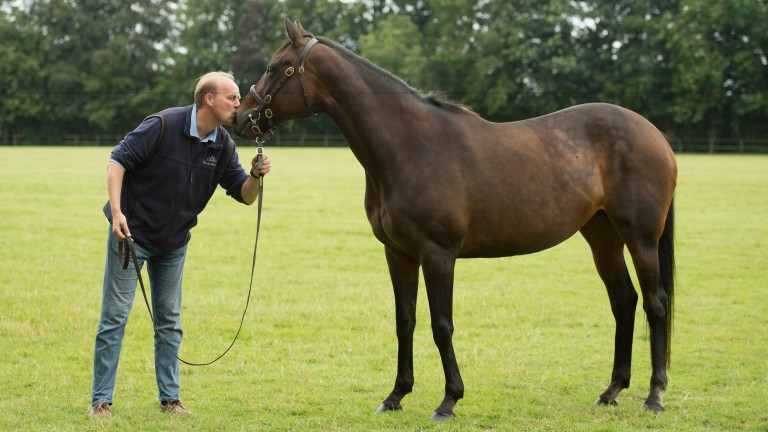 Ouija Board with her former trainer Ed Dunlop at Stanley House Stud
Edward Whitaker
1 of 1
By Zoe Vicarage 4:08PM, FEB 8 2017

Exceptional racemare Ouija Board, the dam of 2014 Derby hero Australia, is set to visit Darley's flagship sire Dubawi this year.

It is not the first time the 16-year-old daughter of Cape Cross - eighth in the Racing Post's recent Queens of the Turf series - has visited the Dalham Hall Stud resident as the cross has already produced Frontiersman, a four-year-old colt who won twice for Charlie Appleby last year.

Peter Stanley, brother of Lord Derby, whose silks Ouija Board carried to top-level victory seven times, and manager of New England Stud, said: “Frontiersman is with the Godolphin team and they're pretty optimistic he could be a very useful horse this year. He had a number of problems as a two-year-old that held him back quite a lot.

“He's a very good-looking horse and I'm a Dubawi fan so it makes sense. Ouija Board gets her foals quite big so it suits us to use him. Of course, what we want more than anything in the world is a daughter out of her.”

Lord Derby has a daughter of Ouija Board in Filia Regina, a Galileo sister to Australia whose Oasis Dream yearling colt was bought by Bill Gredley for 210,000gns at Book 1 of the Tattersalls October Yearling Sale last year.

Stanley said: “Filia Regina is a fine, big-moving mare and we didn't want to go to anything that was too big. Because she's a big mare we're trying not to breed her to an overly big stallion. She also has a magnificent Dubawi yearling daughter that we will race.

“I've been very impressed with Kingman's first foals and he has a hell of a pedigree.”

Stirring Ballad, an eight-year-old daughter of Compton Place who won four times on the track, will visit Yeomanstown Stud's ever-popular Dark Angel after delivering a foal by Siyouni at the end of the month.

Of the decision to send Stirring Ballad to the 12-year-old son of Acclamation, Stanley said: “From a pedigree point of view I think it should work quite well and she was a stakes-placed miler herself. Dark Angel is a sire who has done it the hard way - he's proved that he's very, very good at upgrading mares.

“Dark Angel is out of a Machiavellian mare and I think Machiavellian is an incredibly positive influence on the breed. I can see him moving on from being a sprint sire to a Classic sire. If he makes that transition then he's going to be very good value at the price he is.”

Ruby Rocket, the dam of durable Group 1-winning sprinter Maarek, is set for a date with exciting young Nunnery Stud stallion Muhaarar after she delivers a foal by Siyouni.

An Exceed And Excel half-brother to Maarek was sold to John Ferguson for 480,000gns at Book 1 of the Tattersalls October Yearling Sale last year.

“Ruby Rocket has been a great servant to us by producing a Group 1 winner and she produced an incredibly valuable yearling for us at the sales last year," Stanley said. "She's foaling quite late so we're going to keep her at home and send her to Muhaarar.

“Normally I'm scared of sending mares to second-season stallions but I consider Muhaarar to be extraordinary value at £30,000. I think he's got every chance of making it as a decent sire.”

Wosaita, a 22-year-old daughter of Generous who is the dam of Group 3 scorer Whazzis and Listed winner Whazzat, is in foal to Sea The Stars and will visit Highclere Stud's Cable Bay later this year.

Stanley said: “We'd really like to have another filly out of her and Cable Bay is an interesting prospect. He's been well supported and he's a very good-looking horse. He's an interesting choice at a modest fee and you're going to a pretty good racehorse from a stallion-producing family.”

Among the other mares at the Newmarket nursery are Padmini, a ten-year-old daughter of Tiger Hill and Irish Oaks heroine Petrushka, who will make a return visit to Sea The Stars once she delivers a foal by the son of Cape Cross.

All For Laura, a 15-year-old daughter of Cadeaux Genereux who will return to Muhaarar after delivering a foal by him. She produced Cherry Hinton Stakes winner Misheer to Muhaarar's sire Oasis Dream.

Making Eyes, a Listed-winning daughter of Dansili, is set for a date with Lope De Vega having already delivered a foal by Dark Angel.

Stanley added: “All For Laura returns to Muhaarar and Making Eyes has got a very good foal by Dark Angel. Making Eyes will go to Lope De Vega and so far she's throwing very good types. We've spent a little bit of money on her and hopefully it's justified.”

FIRST PUBLISHED 2:15PM, FEB 8 2017
Dark Angel is a sire who has done it the hard way - he's proved that he's very, very good at upgrading mares