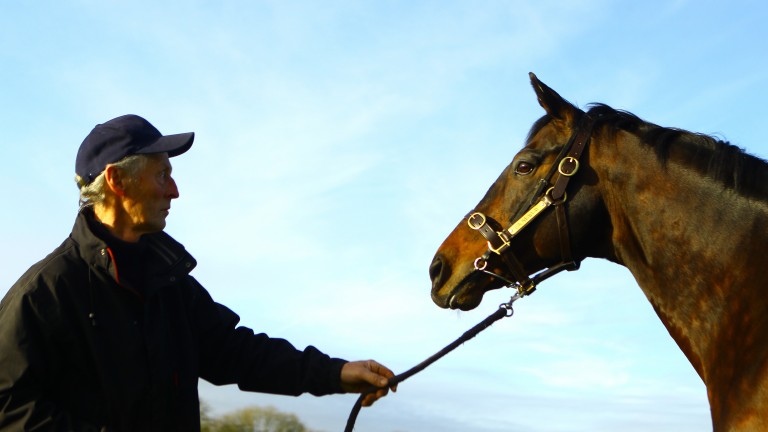 Jack Kennedy was not the only one left feeling over the moon after the success of Outlander in the Grade 1 Lexus Chase last Wednesday, as the victory also provided the winning breeder, Ronnie O’Neill, with great satisfaction on a number of fronts.

“I was delighted with Outlander’s win in the Lexus”, O’Neill said. “I thought it was a great performance and a great day. He surprised me because I thought he wanted soft to heavy ground. He’ll probably go to the Irish Gold Cup and probably the Cheltenham Gold Cup after that. He’s really coming into his own now at nine.”

The success served as yet another reminder of the loss National Hunt breeders suffered when Stowaway died suddenly at the age of 21, having first appeared on the market at a fee of just €1,000.

“What really put Stowaway on the map was a double at Leopardstown a few years ago,” O’Neill remembers fondly. “It was a really cold day and the only meeting that was on was Leopardstown, and it was on national television.

"Hidden Cyclone won the Grade 2 novice hurdle and Mart Lane won the bumper on the same card. Ted Walsh, the presenter, gave him a great boost. That was the first time people really sat up and started taking notice of him. When Champagne Fever won at Cheltenham, he really exploded.

Outlander’s latest Grade 1 triumph was also another feather in the cap of Western Whisper, who has proved to be a fantastic producer for O’Neill, as she is also the dam of Western Leader, who provided Stowaway with his first Graded success when winning a Grade 2 novice hurdle for trainer John “Shark” Hanlon, and Mart Lane, another brother to Outlander, who won a Listed handicap chase at Market Rasen for Dr Richard Newland.

There could yet be further success in the pipeline as O’Neill also owns and trains another brother to Outlander in the shape of Now McGinty, who finished third in a bumper at Limerick over the Christmas.

Western Whisper was covered by Valirann in 2016, although O’Neill suggested that could well be her last covering.

The death of Stowaway may have left a big gap in the roster at Whytemount, but the stallion master is upbeat about the career prospects of the stud’s current residents, particularly those of Valirann and Affinisea.

“Valirann is off to a good start,” he said. “He’s off to a better start than Stowaway. His progeny have sold really well at the sales, with his first crop of foals going through the ring last November. He covered 140 mares in 2016. He got a lot of black-type mares. Stowaway never got anything like that starting off.

“Affinisea is a gorgeous big horse, he made €850,000 as a foal, a record price for a foal in Europe that year. He’s a gorgeous horse, you couldn’t fault him. He will be the first son of Sea The Stars standing as a National Hunt-oriented sire. He has a smashing pedigree and is a close relation of Soldier Of Fortune and Heliostatic, and his grandam produced Sholokhov, sire of last year’s Gold Cup winner Don Cossack.”

One of the keys to Stowaway’s success was the support Whytemount provided him from its own enviable broodmare band, which includes the dams of Outlander and Hidden Cyclone and their sisters, as well half-sisters to Annie Power, Hurricane Fly and Flemenstar and black-type performers Brogella and Karello Bay. And with such a weight of support set to be behind it’s new stallions, the names Valirann and Affinisea could well give O’Neill more cause for celebration in the years to come.

FIRST PUBLISHED 8:00PM, JAN 2 2017
That was the first time people really sat up and started taking notice of him. When Champagne Fever won at Cheltenham, he really exploded.