One-two for Teofilo in Centenary Cup once again 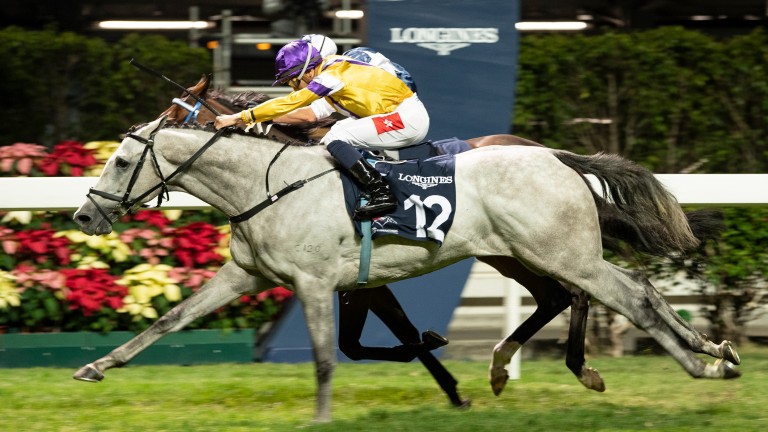 Teofilo supplied a one-two in Sha Tin's Centenary Cup once again but in a different order as Glorious Dragon put Hong Kong star Exultant in the shade.

Exultant, known as Irishcorrespondent when third in the Irish 2,000 Guineas for Michael Halford, was already one of Teofilo's 50 worldwide Group winners and with ten in all, two of which came in the past couple of renewals of this nine-furlong event.

Tony Cruz's gelding was last seen finishing second to Mogul in the Hong Kong Vase and had to carry a full 20lb more than Glorious Dragon, albeit he had managed to do just that and beat him 12 months ago.

Sunday was the grey Glorious Dragon's day though as he weaved through leaders under Matthew Poon to come a length and a half clear.

He was originally known as Stephensons Rocket, who showed plenty of early promise for Ed Walker and Bjorn Nielsen and had registered two Hong Kong handicap wins in late 2019.

Originally bought by Jeremy Brummitt for €235,000 as an Arqana yearling, he moved to Hong Kong connections as a private purchase through SackvilleDonald. He had moved from Arthur Millard to Francis Lui this season and made clear progress from two warm-up starts.

Teofilo, who sired six top-level winners in 2020 rounded off with Twilight Payment in the Melbourne Cup, is standing for €30,000 at Darley's Kildangan Stud.

Juddmonte mating plans for US broodmares

FIRST PUBLISHED 11:00AM, JAN 31 2021
He was originally known as Stephensons Rocket, who showed plenty of early promise for Ed Walker and Bjorn Nielsen