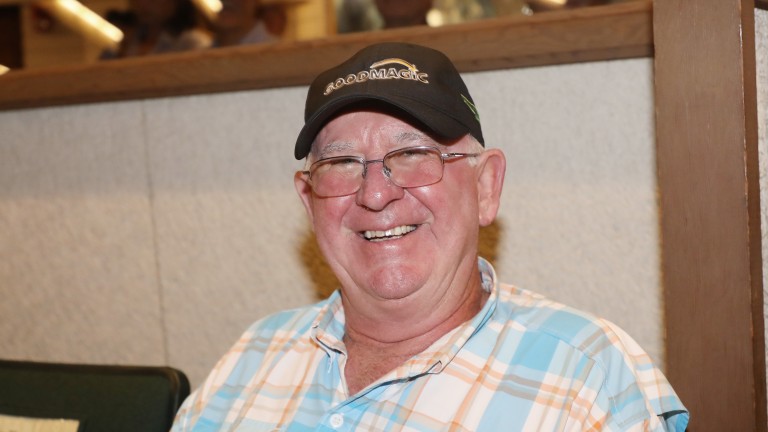 The conclusion of the Ocala Breeders' Sales March Sale of two-year-olds in training was a testament to the resilience of buyers and consignors alike who, in the wake of financial uncertainty, put any lofty aspirations aside in favour of moving juveniles forward through the market in hopes of better things to come.

"The easiest thing in the world is to sell a good horse," said bloodstock agent Jacob West, who was one of hundreds of agents and thoroughbred purveyors who turned up for the first two-year-old auction of the season.

"The toughest thing in the world is to sell a horse that nobody wants. We're obviously in turbulent times right now, but as horsemen in this business, you can tell there are good horses here. Those that for whatever reason don't hit all the marks, they might struggle in this economy. But it's still very easy to sell a good horse."

For the second consecutive day, the market felt the effects of the Covid-19 pandemic, which has isolated many across the country in their homes and forced the closure of most public spaces and gatherings for the foreseeable future.

"One of the things we did as a company to try and unburden the horsemen was we didn't charge an RNA commission for this sale," Wojciechowski said. "So that probably contributed to some of the RNAs we saw today."

Also absent from this year's auction were any seven-figure sales. During the 2019 OBS March sale, two juveniles broke the seven-figure mark, headed by a Tapit  colt named Chestertown purchased by West Point, Masielo, and Siena Farm for $2 million from the consignment of Sequel Bloodstock.

WATCH: Hip 598 by @AirdrieStud's Upstart out of Blue Beryl sells for $600K as one of today's sales toppers at @OBSSales March 2YO in Training.

"As we know, the stock market is down another 2,000 points," said Sequel Bloodstock's Becky Thomas, who reiterated that all consignors and buyers had been keenly affected by recent market fluctuations and sales cancellations.

"I feel like it's more of a levelling with consignors trying to get owners to be realistic and understanding that we don't have another real venue right here immediately and we all have a bunch of product that we need to move. If we can live to play again, then we are all better."

The sale-topper Wednesday was a colt (hip 598) from the first crop of Airdrie Stud's Upstart who was purchased by bloodstock agent Mike Ryan for $600,000.

"This horse reminded me of Structor," Ryan said. "He was very, very like him. It was kind of eerie. We bought him for the same guy that owns Structor, Jeff Drown. I told Jeff, 'We won't find a better horse this year. You might find his equal, but you won't find a better one.'

Obviously, this horse today was very special. I don't know who was the underbidder, but I told Jeff, 'This ain't going to be easy.' The price was right on what we thought."

Consigned by Woodford Thoroughbreds, hip 598 was bred in Kentucky by Lantern Hill Farm out of the Bernstein mare Blue Beryl. He was purchased for $220,000 by Woodford from the Lantern Hill consignment to the Keeneland September Yearling Sale.

"We've been waiting all day for this horse because we knew he was really special," said Beth Bayer of Woodford Thoroughbreds. "We were hoping someone like Mike Ryan would get this horse. We're just very ecstatic. The horse has been doing everything right at the farm. All along, our trainer, John Gleason, thought high of this horse from day one.

"From what I'm hearing across the board, everybody's loving the Upstarts, and I think they're on to the right track. I think he's a good horse, and the (former) governor, Brereton Jones, does a good job picking out nice horses to promote. In a tough market and a tough situation, I think things are going as expected."

Hip 598 was the second Upstart colt purchased by Ryan at OBS March. He also went to $280,000 for another from the consignment of de Meric Sales, agent.

Bred in Kentucky by Aschinger Bloodstock Holdings, the colt is out of the Candy Ridge mare Ridingwiththedevil and was pinhooked by de Meric Sales for $140,000 from the consignment of War Horse Place to The July Sale, Fasig-Tipton's Kentucky select yearling sale.

"It's a colt we bought in the July sale," Tristan de Meric said. "He's the only Upstart we have on the farm, and he's been training great all year and we're happy to have him. I wish we had more Upstarts from the way he's been training. We have high hopes for him. I'm thrilled that Mike Ryan bought him and wish him the best of luck.

"He's just continued to grow the right way. He's always gotten better and better. He's a big, stretchy horse, always moved well, and he's turned into a beautiful colt, and that's why we brought him to this sale. He's early and precocious, but he looks like one that will stretch out and go long, I think."

Overall, Ryan said he was pleased with the workmanlike consistency of the Upstart progeny during the under tack show and had high hopes for them as they begin their racing careers.

"I was very impressed sitting in the stands watching them in the breeze show. They were all good movers, and they all did it the right way," Ryan said. "They're going to be horses that are going to want to run a lot of ground - they'll be two-turn horses. It was consistent with them all. It wasn't just one or two of them."

With OBS sales in April and June in question, Wojciechowski said the company will play it by ear and have plans to meet early next week to discuss next steps and whether cancellations could be in order.

"We realise that there is still a lot of of news on the horizon and a lot of things in turmoil in the world, and we'll try to come up with a plan that works best for everyone," he said.

"Certainly, we've said it over and over, but it was kind of a unique week in having to deal with all the external forces and new territory for us, trying to hold a sale in the environment in which we are living right now.

"Overall, I think it went as good as it could go. There were bright spots both days, and we're happy that we were able to accomplish what we could. I would say we were pleased we were able to get the sale in. Not for our sake, but for horsemen's sake in general."

FIRST PUBLISHED 9:48AM, MAR 19 2020
It was kind of a unique week in having to deal with all the external forces and new territory