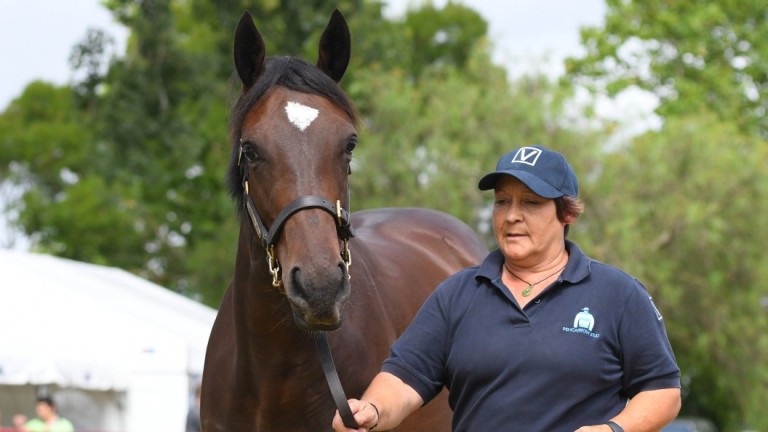 The acquisition of an NZ$500,000 Frankel filly on the last day of Book 1 at the New Zealand Bloodstock Karaka Yearling Sale prompted Brendan Lindsay to reflect on his first auction as a vendor under the Cambridge Stud banner.

Lindsay and wife Jo took over the historic Cambridge Stud from founder Sir Patrick Hogan and the purchase of the filly, one of seven yearlings secured by them this week, also signalled their intent to ramp up the quality of their racing and breeding divisions.

In total, Cambridge Stud sold all 53 yearlings this week, with the most expensive of those being a Redoute’s Choice colt who was purchased for NZ$800,000 on day one and Lindsay was delighted with the overall results.

“As a vendor, we are extremely happy. We only had two that we hadn’t sold (they were sold privately later), so we are happy with our clearance rate as we are with the prices that have been paid for our horses,” Lindsay said.

Part of the Lindsays’ plan to continue to develop Cambridge Stud and invest in quality stallions was having a quality broodmare band to be able to support them.

“Our stallions need to be supported with elite mares and this is why we bought this (Frankel) filly. We are on a rebuilding phase with Cambridge Stud and we have to invest money in the business and this is part of that investment.

“Jo and I enjoy racing horses but we need to invest and to be able to secure a Frankel filly and race her either here or in Australia, it is only going to help our business in the long-term.” 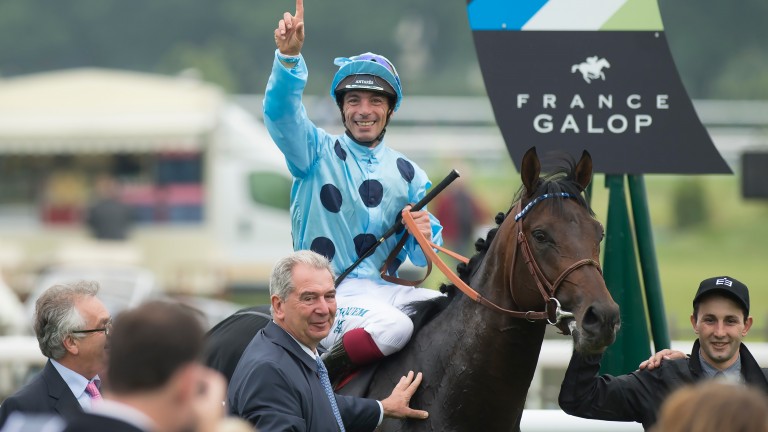 “We ended up turning away about 20 nominations to Almanzor as we were limited, which is a little bit frustrating but I am hoping they will come back this year,” he said.

“He has had his first foals in France and the photos that we are getting through - and you have to be a little biased - you go, ‘whoah’.

“People don’t realise that he stood for €30,000 and they filled him in two weeks. He is extremely popular, so we just have to get the support for the next couple of years until they start hitting the track.”

Catalogued as Lot 577 and offered by Pencarrow Stud, the daughter of Frankel is the first foal out of the European stakes-placed mare Assume, herself a half-sister to the Listed winner Sandreamer.

“From Cambridge Stud’s point of view, it is the chance to get some Frankel blood on the farm which is only going to be good for us going forward.”

The filly could race in a Australia or remain in New Zealand, but Lindsay said the decision would rest with Cambridge Stud chief executive Henry Plumptre.

“The last horse I bought off Pencarrow was J’Adane,” he said.

“That really got me going as she was foaled in the northern hemisphere and brought down here and so was this filly. Maybe the stars have aligned.”

The Lindsay-owned mare J’Adane was placed at Group 1 level three times during a brief racing career before going to the breeding paddock, where she has produced Manawatu Classic winner Sherrif along with multiple stakes winner Von Tunzelman.

“He bought Assume as a yearling, raced her and she was stakes-placed three times in Ireland, put her in foal to Frankel then imported her to New Zealand,” Casey said.

“Pencarrow fillies outnumbered the colts in 2017 and we were reluctant to sell this filly but we have bills to pay. We thought the value was about right, especially given Frankel's service fee.

“Luckily, Assume is a young mare and she has an opportunity to breed us a nice filly later on. She has a Tavistock colt foal at foot and has been covered by American Pharoah.”

European bloodstock agent Hubie de Burgh also rounded out his Karaka purchases with a Savabeel colt, who is a three-quarter brother to the sale-high $1.4 million colt sold on Monday, for NZ$500,000 on behalf of Shadwell Stud’s Sheikh Hamdan Bin Rashid Al Maktoum.

Offered by the sale’s leading vendor Waikato Stud, the home of New Zealand’s champion stallion Savabeel, the colt is out of Cupid who in turn is out of Pins mare Make A Wish, the dam of the David Ellis-purchased sale topper. He was catalogued as Lot 657.

De Burgh described the colt as having the look of a ‘Cox Plate horse’, a race his sire won in 2004. 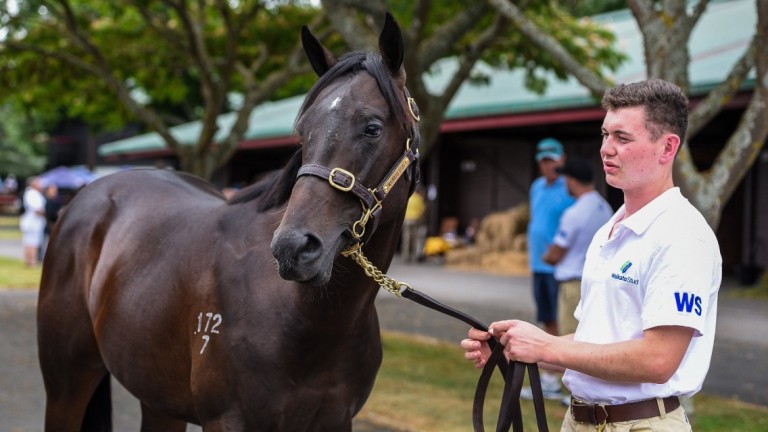 ”He is a beautifully balanced horse. He was a little bit up behind and has got to level off but he really, really walks. He floats on air,” de Burgh said.

“For me, he is a real athlete, but he is by this great stallion, Savabeel. It is a great cross being Savabeel out of an O’Reilly, which is incredible, and I think 14 per cent are stakes winners.

“He is also Savabeel-O’Reilly-Pins, who is the next dam, so we are getting a double cross (that works with Savabeel).”

Lindsay Park will train the colt, while Shadwell also bought fillies by I Am Invincible and Redoute’s Choice a well as a colt by Iffraaj.

De Burgh said the quality horses stood out at Karaka and led to a strong market at the top end of the sale.

“As it is in Europe and Australia, you get rewarded for the good horses and you get penalised for the bad horses,” he said.

Earlier in the session, Waikato Bloodstock’s Bryce and Ginger Tankard secured another Savabeel colt for NZ$425,000.

The Waikato Stud-offered colt is out of Chilled Out who is an unraced half-sister to the Listed winner The Big Chill and Forty Two Below, herself the dam of Group 2 Rich Hill Mile winner Coldplay.

Chilled Out is also the dam of four winners including Flemington winner Savacool.

The colt, who was catalogued as Lot 639, was purchased for Hong Kong clients and Ginger Tankard was thrilled that he did not have to compete with Ellis to be able to secure the horse.

“I said to Bryce, David Ellis has left the ring, now is our chance. Make sure he doesn't come back. He probably would have made more, much more, yesterday,” Ginger Tankard said.

“He is such a nice colt. We bought him for the same owner as Whiskey Neat.”

The Hong Kong Jockey Club also made a late play to secure its second yearling at Karaka this week, taking home a Sebring colt for NZ$375,000 from the Trelawney Stud draft yesterday.

Catalogued as Lot 573, the colt is the second foal out of the stakes-performed winner Are There Any, who has produced the Jamie Richards-trained stakes-placed juvenile Challa.

Trelawney Stud’s Cherry Taylor revealed they bought Are There Any for $170,000 via agent Bruce Perry at the 2016 Magic Millions Gold Coast Broodmare Sale when she was in foal to Dissident.

They then kept her in Australia, sending her to Sebring, with the mating resulting in yesterday’s sales ring success.

“We bought the mare and the first foal was bought by David Ellis and this is the second foal,” Taylor said.

“We are also thrilled that he was bought by Mark Richards of the HKJC because they have been great supporters of ours and they are really good judges.

“We have done lots of work in Hong Kong over the years, we have a lot of friends up there  and we are very happy for them to have him.”

Taylor has been satisfied with the Book 1 sale for Trelawney Stud, with 17 of their 20-lot draft finding new owners.

“(The market) probably has been as expected. It has been a reasonably tough market,” she said.

“If you have had the great big Savabeel colt you can get those away easily and then your middle and bottom market has been tough. We have passed quite a few in but we have got them pretty much all sold.” 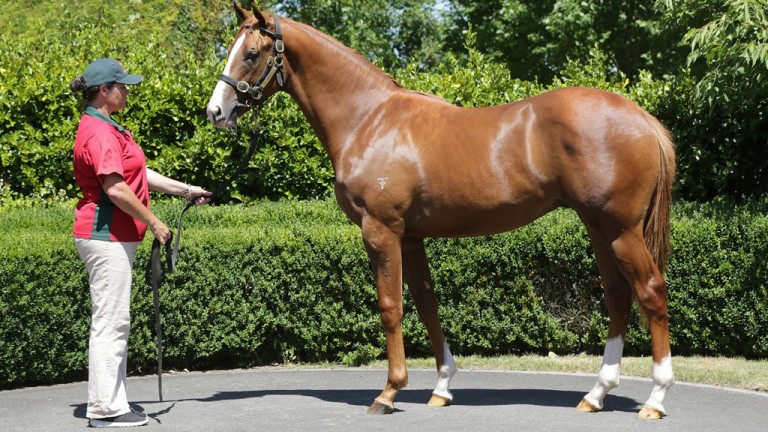 The HKJC’s Mark Richards was not surprised by the competition the colt came under and the fact he was by Widden Stud’s sire Sebring only added to the appeal.

“He looks like a running type with a strong backend on him. I liked the way he just went about the job and hopefully, fingers crossed, he can be a (Group 1 winner like) Lucky Bubbles for us,” Richards said.

“He was very attractive from day one when I first saw him here. He took a day perhaps to settle in but when I went back and had second and third looks he was as good as gold.

“We needed something like that. We have got to look for fast, precocious horses and horses who can hopefully stay the test of time as well. He looks like a sound horse.”

On day one, the HKJC also bought an Ocean Park colt for NZ$220,000 from the Waikato Stud draft.

Te Akau’s Ellis was the leading buyer for the 14th year in succession after he purchased 41 yearlings for an aggregate of NZ$7,825,000.

“We visited every farm in New Zealand and my wife Karyn and I came to the sale really charged because they were the most athletic bunch of yearlings we have seen for a long time,’ Ellis said.

“We put in a lot of research, did a lot of homework and in the end bought off I think 15 different drafts – now we’re looking forward to selling shares in them.”

Waikato Stud was the leading vendor by aggregate for the sixth straight year and average (three or more sold) with 71 yearlings from their draft selling for NZ$16,115,000 at an average of NZ$226,972

Mark Chittick of Waikato Stud credited resident champion sire Savabeel for the majority of the farm’s success this week.

“Savabeel was a very important facet to our Sale,” Chittick said.

“Our decision to sell 100 per cent here has kept the reputation of our National Sale up, and that is very, very important to me, and to our operation.

“I’m really proud of breaking that million dollar barrier, selling the number one horse – he’s the highest priced horse to be sold here since 2013.

“The effort, family and community we have created is what helps us to do this. You can’t be the best without the best.”

The 2019 NZB Karaka Yearling Sale statistics fell across the board, but it came on the back of the introduction of a new extended Book 1 format last year which in turn produced the strongest auction for the company in ten years.

NZB managing director Andrew Seabrook said a fall in participation from the pinhooking buyers and a drop in activity from Singapore byers had impacted the sale.

“I believe the market has held up well considering the lack of pinhooking activity, which traditionally underpins the middle market, the drop off from Singapore buyers due to falling prize-money, and the continued lack of confidence in the local market,” Seabrook said.

“There were 49 Australian trainers here with more arriving today, so again they’ve proven that they are our most important market. It’s also been great to see massive international names like Alastair Donald, Shadwell and Godolphin on the buying sheets.

“I’d also like to congratulate Waikato Stud and Cambridge Stud who supported NZB with 100 per cent of their yearlings this year and were handsomely rewarded as a result.”

FIRST PUBLISHED 5:14PM, JAN 30 2019
Our stallions need to be supported with elite mares and this is why we bought this Frankel filly