Stallion prospect Son Cesio will also come under the hammer 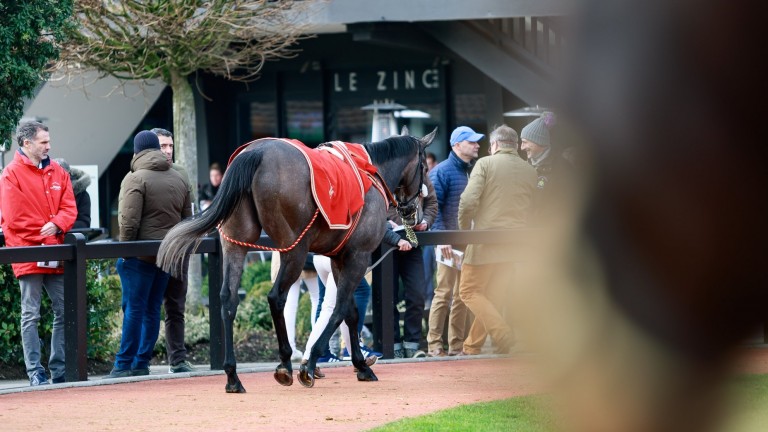 Last year's February Sale was the strongest on record with more than €5 million in total sales
Zuzanna Lupa
1 of 1
By Ollie O'Donoghue 12:55PM, FEB 10 2020

The first Arqana auction of the year takes place this week with the two-day February Sale on Tuesday and Wednesday, with sessions beginning at 10am local time each day.

A one-fiftieth share in Epatante's sire No Risk At All (lot 217 ter)  was added with 11 other supplementary lots last Wednesday, along with the stallion prospect Son Cesio (217 bis), a Group 2 winner by Zafeen from the family of Prix du Jockey Club third Coroner, and both will be offered by Patrick Chedeville's Haras du Petit Tellier.

Other supplementary entries include Eau Vive (76 bis), a three-year-old Siyouni filly out of a Listed-placed sister to National Defense and consigned by HSV Agency, and Queen Khaleesi (170), a three-year-old sister to Group winner Square De Luynes who is offered out of training from Haras du Lieu des Champs.

Meanwhile the original entries include the likes of Agnes (25), a Planteur filly trained by Pia Brant who finished runner-up in the Listed Prix Max Sicard; the Silver Frost mare Silver Cape (39), a winner of three races including the Listed Prix Finlande; and Made To Lead (77), a daughter of Linngari who took fourth in the Group 3 Prix Fille de l'Air last season.

Two promising National Hunt runners set to come under the hammer are dual hurdle winner Nanabelle (76) and Running D'Or (97), a four-year-old daughter of Archange D'Or who won the Grande Course de Haies for four-year-olds at Cagnes Midi in January.

Previous February Sale graduates include Paul Nataf's €20,000 purchase My Sister Nat, a daughter of Acclamation out of the Galileo mare Starlet's Sister who subsequently struck in the Group 3 Bertrand de Tarragon for owner Peter Brant.

Another smart prospect to emerge from the auction is Wootton's Colt, a Listed juvenile winner in Italy picked up for €37,000 as a yearling by Alban Chevalier du Fau from Elevage des Trois Rivieres.

Last year's sale, which included the first phase of the complete dispersal of the bloodstock interests of the late Marquesa de Moratalla, was the strongest on record with 353 lots changing hands for total receipts of more than €5 million.

When Tuesday and Wednesday, sessions start at 10am