No fireworks but a light shone on the sport's unsung heroes 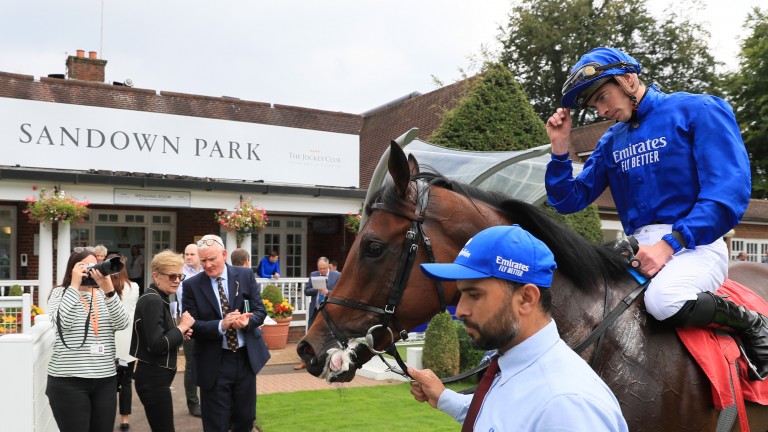 The exciting Goldspur returns after winning at Sandown on Wednesday - one of seven races where breeders were recognised too
Mark Cranham
1 of 1
By Tom Peacock UPDATED 6:07PM, SEP 16 2021

Sandown’s inaugural breeders’ day on Wednesday was not the sort of occasion to stir the racing community into a frenzy of excitement.

Showcasing the bloodstock side of the sport more widely is not the easiest of tasks; it cannot be abbreviated into a shorter format or, heaven forfend, a team event. Fireworks or cheerleaders would be incongruous, to say the least.

Instead it must make the best of what it has through passionate people and a love of the horse. In that sense, the afternoon certainly marked a step in the right direction.

Breeders tend to be an afterthought as even a major race is wrapped up, usually detected in newspapers, online or on television only if they are someone of note. Here, we had breeders and Thoroughbred Breeders’ Association members invited for a day at the track and mementos for those responsible for producing the winner of each race.

It was felt that a spot during National Racehorse Week would work well, and the efforts do complement each other. Retraining of Racehorses parades provide a great way of allowing spectators an extended look at the animals as well as catching up with a few famous names - on this occasion the Gold Cup winner Coneygree was among four to have gone on to a successful new career.

There were interviews with the winners of Lycetts’ leadership and team champions awards, including a typically comedic turn from Richard Phillips, and a racecard packed full of information and pointing readers in the direction of the likes of the National Stud diploma.

The curtain has come down on our Flat season and the first ever Breeders’ Day.

Thanks to @TheTBA_GB for helping bring this fantastic initiative to life. pic.twitter.com/8ZTwLE4lnh

The industry does need to be proactive in attracting new faces, with the TBA’s own reports pointing to a particular decline in small breeders and an ageing demographic. Certainly the fact that the day was actively suggested by Sandown, rather than foisted upon the Jockey Club, is an encouraging sign.

Here, we had a trade stand staffed with knowledgeable and enthusiastic TBA workers, dispensing information and leaflets, and a QR code trail producing snappy videos of studs and young horses, completion of which led to the chance of winning prizes such as lunch at the Derby and visits to Lanwades, Chasemore and the National Stud.

The organisation’s chief executive Claire Sheppard reported that it had already received new sign-ups to become associates and members, particularly among owners who had not thought of diversifying their interest.

This was achieved on a fairly quiet midweek day too. While there will clearly not be the resources to have such a stand at every meeting, it ought to influence finding ways of having a more active presence at fixtures where there is greater footfall, particularly of those not already closely involved. Use of QR codes is surely one idea that could feasibly be replicated.

Sheppard said that the hope was this would become established as an annual event.

"That’s the thought process," she said. "Obviously we’ll go away and talk about the day and what’s worked well and look to build on that in the future.

"It’s definitely a recognition and a thank you for breeders for continuing to support the industry and also trying a number of new initiatives.

"We’ve been promoting [the QR codes and videos] on social media and that seems to have worked well. We’ll see what the level of engagement is and then if it’s something we can talk to other courses about potentially rolling out more generally."

It’s all something, anyway. And judged by the number of sound brains and people of influence in attendance, including the BHA chair Annamarie Phelps, an idea that the whole industry can work with.

FIRST PUBLISHED 4:56PM, SEP 16 2021
Obviously we’ll go away and talk about the day and what’s worked well and look to build on that in the future