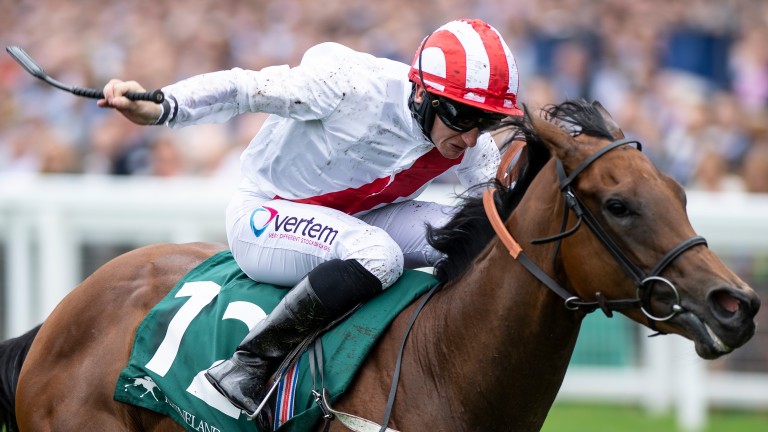 Night Of Thunder has been making a bold show with his first juvenile runners this year and he cemented that good early impression when Under The Stars became his debut black-type winner in the Group 3 Princess Margaret Keeneland Stakes at Ascot on Saturday.

Under The Stars, trained by James Tate for Night Of Thunder's original owner Saeed Manana, came into the six-furlong race for fillies on the back of just a novice auction stakes success at Ripon – albeit an easily accomplished one – but she showed no inexperience as she stuck on well under PJ McDonald to defeat Aroha (by Kodiac) by half a length.

Bred by Rabbah Bloodstock, Under The Stars is the fourth foal and fourth runner out of the winning Invincible Spirit mare Jumeirah Palm Star, but only the dam's second winner after Creek Island, a three-year-old son of Iffraaj who took a lowly Class 6 handicap at Hamilton in May.

It is no surprise then, perhaps, that Jumeirah Palm Star was sold last year and it took Paragon Bloodstock only €1,000 to secure the mare, in foal to Slade Power, from the Godolphin draft at the Goffs November Breeding-Stock Sale.

Jumeirah Palm Star's new owner Shane Walsh has a March-born Slade Power colt out of the mare while Godolphin have her yearling colt by The Last Lion.

Jumeirah Palm Star's dam, the unraced Machiavellian mare Golden Flyer, was also discarded cheaply when sold to Zammitti-Gelati for €2,500 at Goffs in 2016.

Golden Flyer is out of Shir Dar, a daughter of Lead On Time who was a dual Listed winner in France and later landed the Grade 2 Palomar Handicap at Del Mar.

Night Of Thunder took the notable scalps of Kingman and Australia when he struck in the 2,000 Guineas of 2014 and ran second in the St James's Palace Stakes and Queen Elizabeth II Stakes later that season.

The son of Dubawi came back at four to take the Lockinge Stakes and at the end of that year joined the Darley stallion ranks, spending his first two seasons at Kildangan Stud and his last two at Dalham Hall Stud, where he stood this year at a fee of £15,000.

Night Of Thunder has so far fielded 12 winners from 23 runners for an excellent strike rate in excess of 50 per cent.

"It’s a first black type win for Night Of Thunder, which is really good because Saeed owned him" said Tate.

"As he’s an important horse to him, we wanted to try to get some black type for the filly and this was a bit of a plan.

"I’ve got about six Night Of Thunders. A lot of them are from more late-maturing families and the only other forward one had a bit of a problem. She’s the only one I’ve run and is a very versatile, relaxed filly."

Happy Romance owners looking ahead to star's career on and off the track The King George was great but this Saturday at Ascot is far more important Vegas Showgirl, the dam of Winx, to visit Newgate Farm’s Extreme Choice O'Brien and Weld ready to do battle once again in Galway maiden opener King George analysis: 'Adayar might not be the best colt in his stable' Forgive the gushing enthusiasm but I feel like I have seen something special