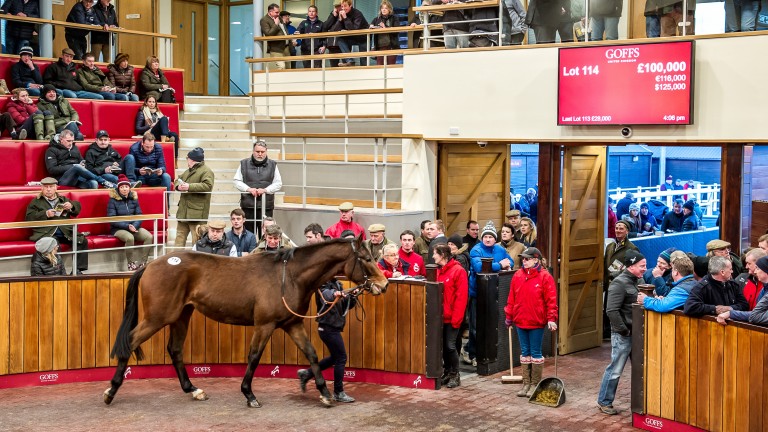 A three-year-old son of Flemensfirth topped the first day of the Goffs UK January Sale on Tuesday when selling to Tom Malone and trainer Paul Nicholls for £100,000.

Out of the winning Mandalus mare Mandys Gold, he is a brother to the Grade-2 placed chaser Sizing Gold.

He was offered as part of the dispersal of stock from the late Graham Roach, who died at the age of 69 last September. His famous red and white silks were carried to victory by dual Queen Mother Champion Chase hero Viking Flagship, St Pirran and Thisthatandtother.

Nicholls, who trained a number of Roach’s horses including Thisthatandtother and St Pirran, said: “He’s been bought for Colm Donlon who is an existing client of mine. There’s no rush with him as he’s only three and we’ll make a plan with him when he’s a bit older.”

A couple of lots prior to the Flemensfirth three-year-old, Nicholls went to £65,000 to secure a four-year-old son of Presenting who was also offered as part of the Roach dispersal.

Out of the winning Exit To Nowhere mare Full Of Spirit, the gelding shares his page with top-class jumpers Prince Of Scars and Folsom Blue.

Nicholls added: “He’s been bought for Roger Penny. We’ll take him home first and he might run in a bumper or he might go to Jack Barber to run in a point-to-point.”

A select point-to-point session proved to be the main draw of the day and despite being led out unsold in the ring at £85,000, Minella Encore was later sold privately to Eamon Phelan for £100,000.

The five-year-old son of King’s Theatre was offered by Colin Bowe’s Milestone Stables and was last seen winning a 3m maiden point-to-point at Killeagh by an impressive ten lengths.

Black Pirate, a five-year-old son of Black Sam Bellamy, had been even more impressive on his debut when landing a 2m4f point-to-point at the end of December at Chaddesley Corbett by 15 lengths.

He has a host of black-type jumpers in his pedigree such as Grade 2 scorer Hobbs Hill and the Listed-winning mare Hollies Pearl, and it was agent Bobby O’Ryan who struck the winning bid of £75,000 to secure the horse.

O’Ryan said: “He’s a lovely sort who is one for the future. He’s been bought for James Ewart and one of his owners Jim Gordon. The same cross as Hollies Pearl in the family has proven to have worked before.”

Highflyer Bloodstock also got in on the action during the point-to-point session when Tessa Greatrex parted with £50,000 for Indian Hercules.

The five-year-old son of Whitmore’s Conn was last seen winning a 3m maiden at Aghabullogue earlier this month, having finished third on his debut at Dromahane in December.

Greatrex said: “I've bought him to go to Warren Greatrex. I like his profile, he’s a really nice type and we potentially have an existing owner for him. We’ll get him home and see what the plan is.

"Hopefully we’ll get a bumper run into him and I think Warren will take a view and then see where we’re at.

“It’s quite hard to start hurdling halfway through the season.”

Those figures could have been even better as bidding for impressive Lingstown point winner Minellafordollars soared to £240,000. But he was recorded as a vendor buyback.

The sale continues on Wednesday from 10am.

FIRST PUBLISHED 6:39PM, JAN 24 2017
A select point-to-point session proved to be the main draw of the day