Breeder of the Week GOLDFORD STUD

Newspaperofrecord back in the Grade 1 Game for British stalwarts

Star filly had earlier hit the heights at 2018 Breeders' Cup 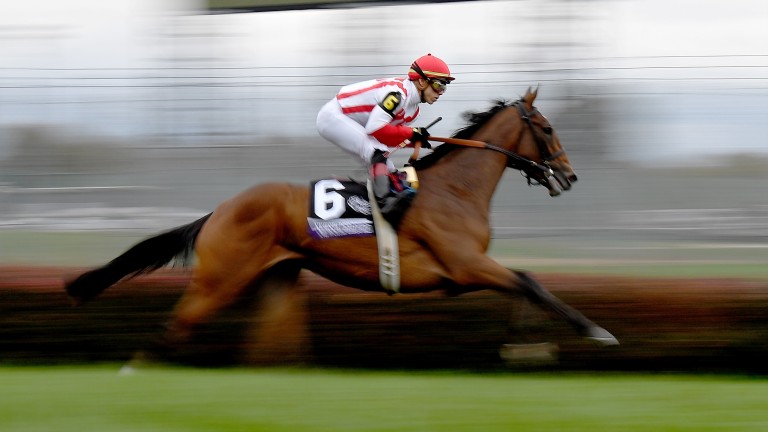 Newspaperofrecord's emphatic return to the Grade 1 fold at Belmont Park on Saturday put Cheshire back in the headlines too as the filly's triumph in the Just A Game Stakes was welcomed by Goldford Stud.

Raised at Richard and Sally Aston’s premises near Malpas in Cheshire on behalf of long-standing Lancashire-based owner-breeder Allan Belshaw, the daughter of Lope De Vega and remarkable mare Sunday Times had been sold for 200,000gns at Book 1 of the Tattersalls October Yearling Sale in 2017 to Klaravich Stables and Chad Brown.

A scintillating two-year-old campaign came to a crescendo in the 2018 Breeders’ Cup Juvenile Fillies’ Turf, but Newspaperofrecord had failed to live up to the hype in three starts last year.

Given the best part of a year off, she had returned to lift a Grade 3 at the same New York track at the start of the month and extended Brown's annexation of the one-mile turf prize to a fourth year.

Newspaperofrecord controlled the race from the front to beat the doughty Beau Recall by three lengths, with Brown's returning Breeders' Cup Mile winner Uni back in third.

Richard Aston said: "It’s nice to have her back. It was great to see her win the race at the beginning of the month after the disaster that was her three-year-old year, but she’s just confirmed that it was not a flash in the pan.

"Simply Times boarded here and a lot of her offspring were born and raised here. She was an amazing mare – she had ten runners, ten winners from I think 12 foals.

“There’s nobody more deserving of all the success than Allan, because he’s ploughed a lone furrow in many respects. He loves to choose the stallions. For however long, 30 or 40 years, he’s been racing and breeding horses and to create such a dynasty is extraordinary.”

Brown has a wealth of talent in the miling division and was cautious about stating future targets after the race. Although a regular buyer in Europe, acquiring any more of Newspaperofrecord's immediate family will be difficult.

“This year’s foal is a full-sister - I don’t think that there would be any chance that she will be sold,” said Aston. “Allan will put her into training.

"Sunday Times is in foal to Kingman and the three-year-old filly, Daily Times, she’s in foal to Blue Point.

"Allan’s got lots now of the immediate family and we’re in a very favourable position, I’d say.”

FIRST PUBLISHED 3:16PM, AUG 31 2020
There’s nobody more deserving of all the success than Allan, because he’s ploughed a lone furrow in many respects