Sir Michael Stoute-trained Hazarfiya is a daughter of Fastnet Rock 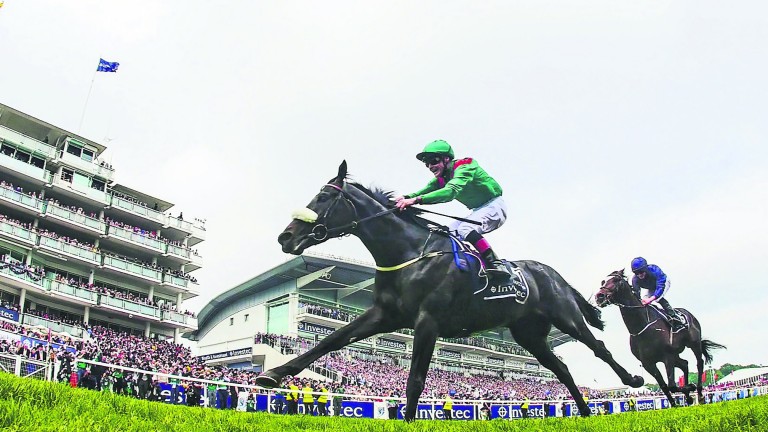 A half-sister to last year's Derby hero Harzand and a Galileo filly out of a Danehill mare makes the juvenile fillies' novice stakes over a mile at Newbury on Saturday (1.10) a most intriguing contest.

Newsells Park Stud take the wraps off their homebred Fastnet Rock filly Hazarfiya, a half-sister to Harzand - who commanded a fee of €15,000 in his first breeding season at his owner-breeder the Aga Khan's Gilltown Stud this year.

Although Harzand was bred by the Aga Khan himself, his dam, Hazariya, is another mare to have produced an elite winner that the operation have let go.

Hazariya realised €480,000 from Oliver St Lawrence at Goffs the year before Harzand's Epsom triumph, and was subsequently sold by Newsells Park Stud to Coolmore for 2,000,000gns at last year's Tattersalls December Sale.

Other top-flight winners out of mares sold by the Aga Khan include the likes of Almanzor, Capri, Librisa Breeze and Vadamos.

Newsells bred two foals out of Hazariya, the other now a yearling filly by Dansili, while Coolmore have bred an Invincible Spirit filly foal from the mare, her seventh filly from nine foals.

Aside from Harzand, who completed the Derby double in Britain and Ireland, Hazariya has also produced the 7f Group 3 winner and Group 1-placed Harasiya, 1m4f Listed scorer Hazarafa and the Group 3-placed Haziyna.

Perhaps her biggest threat will come from the David Simcock-trained debutante Birch Grove.

Bred by Glenvale Stud, the Galileo filly is out of the Danehill mare Danehurst, meaning she is bred on the same cross that operates at a 69 per cent strike rate and has given us the likes of Frankel, Intello, Highland Reel and Teofilo.

Danehurst was a dual Group 3-winning sprinter for Sir Mark Prescott and owner-breeders Cheveley Park Stud, and as we have seen with the likes of Churchill, Clemmie and Winter, mating Galileo with speedy mares in no bad thing.

Cheveley have an interesting runner of their own in the once-raced Pivotal filly Red Starlight, while first-season sire Camelot is doubly represented with Expensive Liaison appearing to give him the best chance of another juvenile winner.

FIRST PUBLISHED 12:06AM, OCT 28 2017
Other top-flight winners out of mares sold by the Aga Khan include the likes of Almanzor, Capri, Librisa Breeze and Vadamos