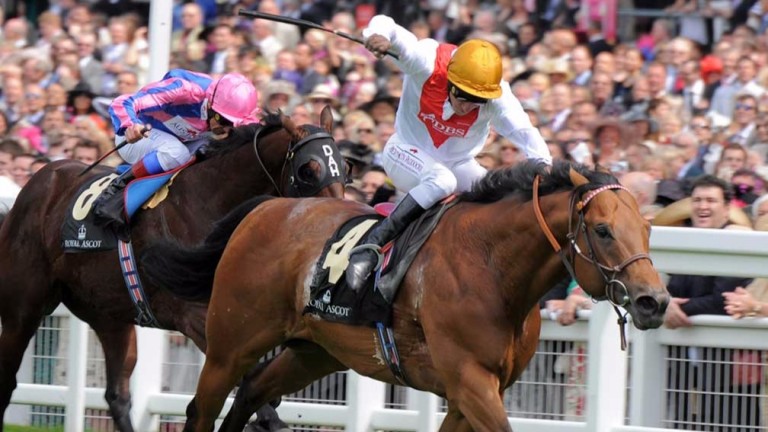 Newsells Park Stud has released the 2017 fees for its stallions Equiano and Nathaniel.

Commenting on the adjustments Newsells Park Stud's general manager Julian Dollar said: "Equiano has had an unbelievable year, siring no less than seven Group/Stakes winners, led by The Tin Man, an emphatic winner of the Group 1 Champions Sprint on Champions Day at Ascot. The Tin Man has proved wonderfully consistent and we have much to look forward to with him next season.

"In addition, Equiano had impressive two-year-olds like Medicine Jack, the winner of Group 2 Railway Stakes and third in the Group 1 Phoenix Stakes behind Caravaggio, and the Stakes winner Alicante Dawn.

"If these two improve from two to three, as is typical of Equiano's stock, they should both have exciting seasons in 2017.

"Nathaniel has made a solid start with nine two-year-old winners to date, much as would be expected considering his pedigree and his own racing career. Many of the trainers of Nathaniel's two-year-olds have told us that they are nice horses who are only going to improve.

"Top trainers like John Gosden, Markus Klug and Nicolas Clement have spoken of their winning sons of Nathaniel as leading Derby hopes for 2017 and it was notable that many trainers of Nathaniel's two-year-olds were back to buy his yearlings again this year.

"Nathaniel hails from a remarkable family, many of whom improved dramatically from two to three. He himself improved by 36lbs on official ratings from the end of his two-year-old season to July of his three-year-old year and his siblings made similar progress, with three of them improving between 30lbs and an incredible 50lbs by the summer of their Classic years.