Martin Stevens gets the lowdown from Loizos Pantelides of Hadjiyiannis Stud 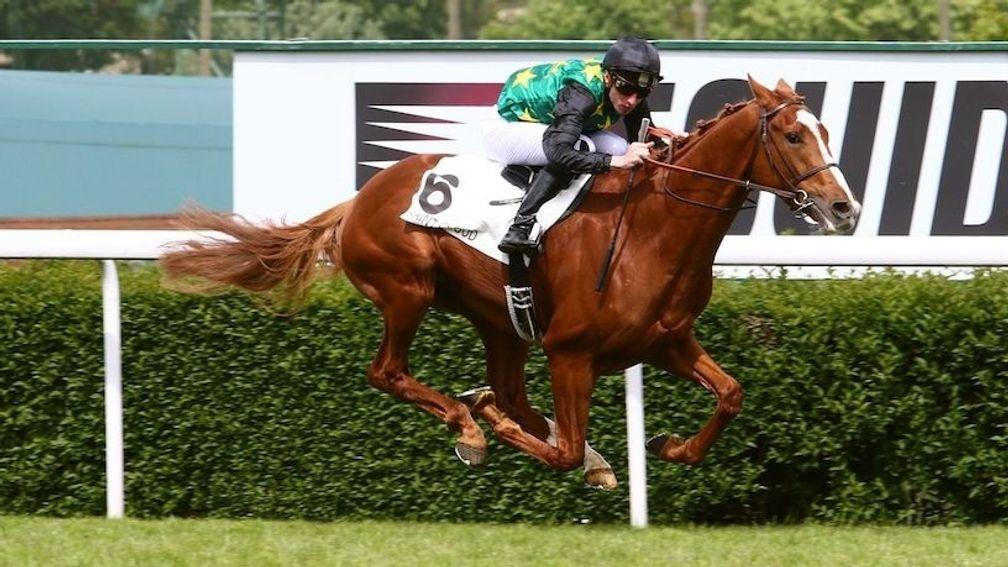 Straight Shooter: a case of 'what might have been' as far as the racecourse is concernedCredit: Hadjiyiannis Stud

Here, he speaks to Loizos Pantelides of Hadjiyiannis Stud in Cyprus about Frankel's son Straight Shooter. Subscribers can get more great insight from Martin every Monday to Friday.

Cracksman is doing a fine job of advertising Frankel’s credentials as a sire of sires, having supplied 17 winners at a clip of 30 per cent with his first two-year-olds last year, including black-type scorers Aloa and Dance In The Grass. If his progeny improves for turning three like he did, he should have a productive sophomore season.

Strictly speaking, the Dalham Hall Stud resident is not the bellwether for Frankel sons at stud, though, as there were at least two who retired the year before he did, and are therefore one year ahead with their progeny. They include the Cyprus-based Straight Shooter.

Bred by Serge Boucheron from his prolific unraced Machiavellian mare Straight Lass, the dam of 12 winners including Prix Jean-Luc Lagardere hero Naaqoos and Group 3 scorer Barastraight, he was sold for €400,000 at the Arqana August Yearling Sale.

He looked like he might be a first-crop phenomenon for Frankel when sent out by Andre Fabre to win a Saint-Cloud conditions race by seven lengths on debut at three, but that turned out to be his only start as he never raced again.

Instead, he was bought by Loizos Pantelides, a long-time owner and breeder in Cyprus, and the late Nicholas Hadjiyiannis, in a deal brokered by Oliver St Lawrence Bloodstock. He commenced covering mainly private mares at Hadjiyiannis Stud in Akaki, a village 15 miles from Nicosia, at the age of four.

Five years later, Straight Shooter is the source of 14 winners of 29 races, from 27 runners. His progeny have won four local Group 1s, a local Group 2 and a local Listed contest.

Alex, a gelded son from his first crop, was the champion horse in Cyprus last year, an honour that is conferred upon the highest earning horse competing there. He won six races, including the Mediterranean island’s equivalent of the Derby and 2,000 Guineas.

Explaining how Straight Shooter ended up in warmer climes, Pantelides says: “My business partner, the late Mr Nikolas Hadjiyiannis, and I decided to buy him for several reasons. First, he has an outstanding pedigree: his sire Frankel needs no introduction while his dam Straight Lass is from a proven line, going back to the Irish 1,000 Guineas winner Gaily, and she had already produced a Group 1 winner in Naaqoos.

“Second, he has excellent conformation and was also impressive in his only run when winning easily over a mile at Saint-Cloud. There was a lot of hype around him in the press after that. There was also a short video of him made for when he was catalogued to sell at the Arqana August Yearling Sale, which made us fall in love with him. It would be remiss of me if I forgot to mention and thank our friend Oliver St Lawrence, as nothing would have been possible without him.

Straight Shooter: slightly out of sight but doesn't deserve to be out of mind

“Straight Shooter was one of Frankel's first sons to go to stud. We admit that we’re Frankel fans and followers, and this made our decision easier. At that time, we strongly believed that in the near future, he would become a top stallion as well as an important sire of sires.

"Based on his progeny's achievements over the past years, it’s now obvious that Frankel has already proven himself as a top stallion, at least, if not the best one.”

Cyprus has no official black-type races and only around 320 mares covered by thoroughbred stallions each year. Straight Shooter received 31 of those last year.

Races on the island are held on Sundays and Wednesdays in winter, spring and autumn, on Wednesdays and Fridays in summer, and on most public holidays. Bets are accepted under the rules of the Nicosia Race Club up to the last second before the start of each race at the track, or at one of the more than 100 authorised betting agents.

“The standard is lower compared to other advanced racing industries but the competition, the interest and the passion around the sport in Cyprus is high,” emphasises Pantelides.

Clearly, Straight Shooter’s deeds in a breeding backwater will only ever be a tiny footnote deep in the footnotes of Frankel’s record as a sire, but along with Cracksman’s strong start, they might provide some comfort to the supporters of the growing band of stallion sons of the unbeaten dual world champion in major racing nations.

Sogann, an unraced half-brother to Dabirsim who stands at Norton Grove Stud, will have a small debut crop of two-year-olds racing this year, while Without Parole, the St James’s Palace Stakes victor who stands at Newsells Park Stud, has his first yearlings selling in the autumn. The few foals by the sire who went to auction late last year seemed to win the respect of the market.

Then, arriving on stud farms as we speak, are the first foals by Logician and Mirage Dancer, Group 1-winning Juddmonte homebreds with typically strong pedigrees who were retired into the National Hunt stallion ranks on either side of the Irish Sea last year. Logician covered 183 mares at Shade Oak Stud, while Mirage Dancer received 135 at Castlefield Stud.

One who I worry might have got away, from western European breeders at least, is Elarqam, who formerly stood at the late Larissa Kneip’s Haras de Saint-Arnoult in Normandy and has been bought to stand in Turkey from this year.

It can be hard to compete with the big offers that Turkish breeders make for stallions they most desire, as we saw with Authorized, but I hope that a few studs in Britain, Ireland or France at least tried to keep a Group 2-winning and Group 1-placed son of champions Frankel and Attraction, who was also a Group 3 winner at two and a close fourth in the 2,000 Guineas, closer to hand.

“We had a gorgeous foal with great quality and physique by Lope Y Fernandez,” says Hyde Park Stud’s John Bourke about a notable new arrival in recent days.

Richard Hannon unleashes a filly with considerable potential and no little residual value in the seven-furlong novice stakes at Wolverhampton on Monday (5.30).

Denford Stud homebred Galexia is by the late prolific champion sire Galileo and is the second foal out of the operation’s classy Zoffany mare Illuminate, who was sent out by Hannon to win the Albany Stakes and Duchess of Cambridge Stakes at two.

Illuminate’s first foal is the four-year-old colt Jasperoid, also by Galileo. Trained by Andre Fabre, he won a warm conditions race at Saint-Cloud at two and finished a close fourth in the Listed Grand Prix de Clairefontaine last year at three.