Newgate Farm looks to Japan as it adds to broodmare band 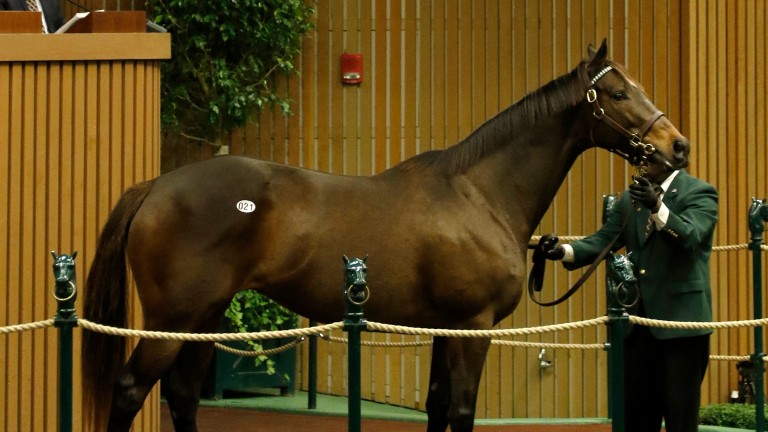 My Conquestadory, a daughter of Artie Schiller was bought in foal to Tapit for $1.5m
Keeneland Photo
1 of 1
By Michele MacDonald 8:06PM, NOV 15 2016

Inspired by Japanese breeders’ success with mating American-bred mares to their stallions, Australian Henry Field and his partners in Newgate Farm in New South Wales plunged deeply into the select sessions of Kentucky’s November bloodstock markets this week.

After Book 1 of the Keeneland breeding stock sale and the one-session Fasig-Tipton sale, Newgate had joined with SF Bloodstock to buy 15 fillies and mares for a total of $8.1 million.

“We’ve seen the Japanese come here for years and years and have been so successful doing it. I suppose we’re trying to follow suit,” Field said. “And we’ve seen the US mares be very successful in Australia and all over the world, so we’re here to buy proper mares. So far, we feel we have top of the tree mares for Australia.”

SF Bloodstock - which was launched in 2008 by Australian Gavin Murphy and bears the initials of Murphy’s employer, the Soros Fund of billionaire political activist George Soros - is a partner in the Newgate Farm enterprise, which Field noted stands nine stallions and plans to add four more in a year or so. Field’s other partner in Newgate is Australian entrepreneur Mathew Sandblom.

Field was joined by Murphy and SF agent Tom Ryan during the buying spree and the 15 horses collected by Newgate and SF Bloodstock included a trio of Grade 1 winners: five-year-old My Conquestadory, a daughter of Artie Schiller in foal to Tapit for $1.5m who ranked as the most expensive of the purchases; 11-year-old Mushka, by Empire Maker and also in foal to Tapit, who was purchased for $650,000, and five-year-old Al’s Gal, a daughter of English Channel who won the EP Taylor Stakes at Woodbine for Ken and Sarah Ramsey last month for $800,000.

“She’s a gorgeous mare,” said Ryan after signing the ticket for My Conquestadory at Keeneland, adding she likely would travel to Australia to be bred next year to Newgate’s recent addition Capitalist, a son of Written Tycoon who was Australia’s champion two-year-old in 2015-16.

Other stallions standing at Newgate include Australia's former horse of the year Dissident, a son of Sebring owned and raced in a partnership including China Horse Club; Australian Guineas winner Wandjina, by Snitzel; Australian Derby winner Criterion, by Sebring, plus Foxwedge (Fastnet Rock), Deep Field (Northern Meteor), Eurozone (Northern Meteor), Sizzling (Snitzel), Super One (I Am Invincible) and shuttler The Factor (War Front).

“We’ve built up a wonderful band of stallions, and we have four of the top colts in Australia retiring to the farm either in the next season or the season after,” Field said.

“We have a wonderful broodmare band, but we’re adding to it with some fresh blood - fast American fillies with some high-class, outcross blood that we think will complement the new stallions.”

Field said Newgate and its partners intend to do their part to give the stallions the best chances to succeed.

“Our key focus is not just to stand the stallions and sell nominations, but to really develop their careers. You do that with exceptional mares,” said Field during one of the Keeneland sessions. “And that’s what we’re here to do - to buy exceptional mares to support our stallions.

“We’ve bought some stunning mares here and we feel these types of mares - proper, Grade 1, 2 and 3-performing mares - will really give our stallions a huge opportunity,” he added.

Among the Newgate and SF Bloodstock purchases was the four-year-old Unbelievable, a half-sister by Fastnet Rock to European champion Peeping Fawn and Group 1 winner and sire Thewayyouare from the family of American broodmare of the year Better Than Honour. Bred by the Coolmore-affiliated Barnett Enterprises, the unraced Unbelievable was bought for $810,000 while in foal to Coolmore’s champion Gleneagles.

Newgate and SF also went to $650,000 to buy Unbelievable’s weanling half-sister by War Front, with Field describing the pedigree as a global commodity that would rate highly anywhere in the world.

Field described the select part of the American bloodstock market as strong.

“But at the end of the day, we found that it was reasonable to buy what we wanted to buy,” he said. “We’re not necessarily honing in on the mares that the big US buyers want. Equally, the quality of mares that we’ve bought wouldn’t be any less expensive anywhere around the world.”

He noted that Japanese breeders have sought mares offering outcrosses to the proliferation of Sunday Silence stallions in Japan, and he is seeking new lines to match with the domination of Danehill blood in Australia. Japanese breeders have helped make Sunday Silence’s son Deep Impact the world’s leading sire by progeny earnings in large measure with American-bred mares; of Deep Impact’s 27 Group 1 winners, 11 are out of American-bred mares and another ten are out of mares sired by American-bred stallions.

Meanwhile, in addition to joining with the Newgate purchases, SF Bloodstock - which sells and buys worldwide - was active on its own account, spending $7.075m for 16 fillies and mares.